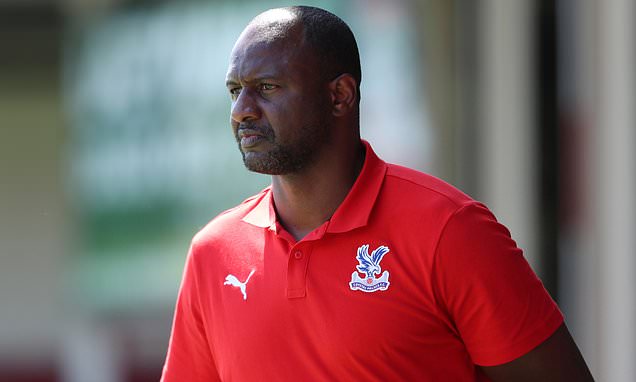 Patrick Vieira has compared Mikel Arteta to Didier Deschamps' ahead to his 'emotional return to the Emirates on Monday evening.

Vieira, who captained Arsenal’s Invincibles team, replaced Roy Hodgson in the Crystal Palace dugout in July 2021. Now, three months on, he is set to oversee his first London derby.

‘I don’t know him really well as a man. As a player I think he was a really good player and had a wonderful career,’ Vieira said.


‘The way that he manages himself to be a manager he was in the Manchester City group and he learned the job before getting the chance at Arsenal and he did everything in the right way.

‘He is somebody who understands he was playing going into a managerial area was something he wanted to.

‘The way he was playing on the field, talking a lot with his players, he reminds me of Didier Deschamps of the French national team.

‘When he was playing you know Didier was going to be a manager. Arteta is in the same mindset.’

Vieira also said he was impressed with how Arteta has persevered after enduring a miserable start to the 2021-2022 campaign.

‘I think when he was under pressure he did really well as he’s always been calm and composed,’ Vieira added.

‘What is important is he is doing really well, he can focus on what he can control like how the team play, keep going and try to change things around.’

Arteta has also spoken very highly of Vieira - hailing him as ‘remarkable’ and one of a kind ahead of the London derby.

Arteta played against Vieira in one of his final Arsenal appearances – a 7-0 defeat for Everton at Highbury - and later during the Frenchman’s one-season stint at Manchester City in the final game he started in his career.

Asked whether he would have liked to face Vieira at his peak, Arteta smiled: ‘No!

‘He was very dominant. He was physically really gifted, technically too, he had the right temper, he was brave and he could score goals. He could do a bit of everything and he was remarkable.

‘He is an Arsenal legend and I hope he gets the reception he deserves for what he did for the club, not only as a player but also what he transmitted as a person. He was a captain of the club in the most successful era in the last many years and it is great to have him back.

‘To have him back and to welcome him and having his figure [back] and what he's been at the club. Recognising him the right manner, I think it's really important and I'm sure that that will be the case.

‘There have been some really good midfielders and Patrick was Patrick. There’s not going to be another one like him.’

Vieira won three Premier League titles, including leading Arsenal to the 2004 Invincibles triumph, and four FA Cups during his nine years as a player.

While Arteta made 119 Premier League appearances for Arsenal and led the Gunners to consecutive FA Cups in 2014 and 2015.