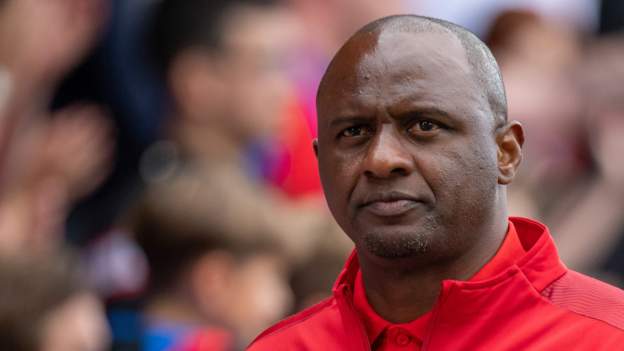 Patrick Vieira made over 400 appearances for Arsenal as a player

Patrick Vieira says he is relishing an "emotional" return to Arsenal but is focused on Crystal Palace's need for Premier League points.

Vieira, 45, will face his old club for the first time as a manager when Palace travel to Emirates Stadium on Monday.

The French World Cup winner won three Premier League titles and four FA Cups with the Gunners and captained the 'Invincibles' side of 2003-04.

"The focus and concentration will be on how can we perform well," said Vieira.

He has twice returned to face the Gunners as a player (With Juve and Manchester City) but is yet to end up on the winning side at the home of his former employers.

"That is the club where I played my best football I would say," Vieira added.

"So obviously going back there will be emotional, but I will put that on the side because it will be important for us to perform well and to get points.

Arsenal have not won the Premier League title since Vieira's departure as a player and have finished outside the top four in each of the past five campaigns.

However, he declined to offer reasons for their struggles to be competitive near the top of the table in recent years.

"That's a question to really ask people who have been inside this football club," he added.

"I'm just like everybody else analysing things from outside. I don't want to get into details because it's difficult to talk about when you don't have all the information."