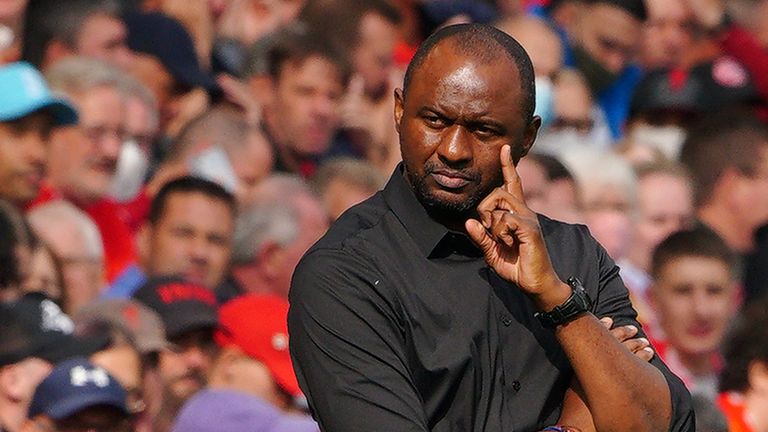 Team news, stats and prediction ahead of Arsenal vs Crystal Palace in the Premier League on Monday Night Football; kick-off 8pm.

The midfielder suffered ligament damage in his right knee during last month's win over Tottenham and will be missing until around the new year.

Gabriel Martinelli (muscular) could also be absent while Mikel Arteta will check his international stars all returned unscathed.

Crystal Palace boss Patrick Vieira has reported a clean bill of health from his international players who have returned from World Cup qualifying duty.

Nathan Ferguson and Ebere Eze (both Achilles) continue to make good progress with their respective recoveries, but the pair will not be rushed back into first-team action.

Crystal Palace manager Patrick Vieira confirms that Eberechi Eze is back in training with the squad, but won't be rushed back after a lengthy injury

Vieira, who returns to Arsenal after spending nine trophy-laden years as a player there between 1996 and 2005, could hand a starting spot to Michael Olise after his impressive contribution as a substitute in the pre-international break draw with Leicester.

FREE TO WATCH: Highlights from Brighton's draw against Arsenal in the Premier League

FREE TO WATCH: Highlights from Crystal Palace's draw against Leicester City in the Premier League

Arsenal have won five of their last six home games in all competitions. This has coincided with a much-improved defensive performance in recent weeks, keeping three clean sheets in their last four games with the defensive axis of Aaron Ramsdale, Gabriel and Ben White showing some promising early signs. I think they'll have too much for Palace here.

Following Emile Smith Rowe in various shots and goalscorer markets has been a profitable strategy so far this season and there is no reason to ditch him just yet, especially with confidence flowing having netted three goals in his last five games for club and country. Despite playing in a very advanced role for Mikel Arteta, he is still being priced up by the markets as an inconsistent wide player with little end product.

There is no way we'll be getting prices like 10/11 with Sky Bet for him to have at least one shot on target in a few months. It's a bet that would have won in nine of his last 10 appearances in all competitions both domestically and internationally with his only failure to hit the target coming in the defeat at Manchester City when Arsenal hardly ventured out of their own half. I'd expect the Gunners to dominate territory for large chunks of this encounter which should see Smith Rowe come to the fore in dangerous areas. He can hit the target.

BETTING ANGLE: Emile Smith Rowe to have at least one shot on target (10/11 with Sky Bet)