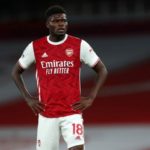 Premier League action returns this weekend and Arsenal are preparing to welcome Crystal Palace to the Emirates Stadium on Monday night.

Boss Mikel Arteta held his pre-match press conference this afternoon and he offered a team news update which included the latest on Granit Xhaka, Thomas Partey and Gabriel Martinelli.

Let’s start with Xhaka and Arteta has confirmed the midfielder is making good progress in his recovery from a knee injury that he sustained during Arsenal’s victory over Tottenham in the NLD last month.

Xhaka is expected to be on the sidelines for around three months but Arteta has suggested the Swiss international is doing everything he can to get back as soon as possible, so an early return to action could be on the cards.

The boss was also asked whether Partey would be ready to face Crystal Palace on Monday night having featured in Ghana’s two games during the international break.

The midfielder scored in both the World Cup qualifiers against Zimbabwe but the club are waiting to see Partey’s condition when he returns to London Colney following his long-haul trip before making a final decision over his availability.

Arteta also revealed a fresh blow with the news that Martinelli picked up a knock last week and is now a doubt for Arsenal’s game with Palace. The injury is described as ‘minor’ so it shouldn’t keep the Brazilian out for too long if he does miss out on Monday night.

on the team news and the latest on Granit Xhaka…
At the moment everyone seems to be okay. Granit is progressing really well but obviously we know it is a long-term injury unfortunately and he’s not going to be available.

on Granit Xhaka’s return…
With Granit, I don’t know, but I’m sure that if you tell him three [months], he will be thinking two [months]. He will be trying to do extra work to try to minimise that time, that’s for sure. We have to do it in the right way because it’s a significant injury and we want to have him back properly when he can.

on if Thomas Partey will be ready for Crystal Palace…
Well, let’s see. We haven’t had the players here yet. Some of them because they’re still travelling and they’ve not been assessed by the medical staff, but hopefully. He finished both games really well. He played well and scored a couple of goals like many other players did in this international break, and hopefully, everybody is in the right condition on Monday to help us win the game.

on Martinelli
Unfortunately he got injured last week – it’s a minor injury and we don’t know if he’s going to be available for Monday.

Partey should already be back in north London following his exploits with Ghana so unless he picked up a knock while away with his country, I’d fully expect him to be available to start against Palace.

It’s a shame that Martinelli is injured but hopefully he’s not out for long as he really needs to get his season going following a disappointing start to the new campaign.

Otherwise, Arsenal have no other injury concerns so Arteta’s squad is in good shape as we prepare to take on Patrick Vieira’s Crystal Palace side at the Emirates. I’m sure the fans will give Paddy a warm welcome.