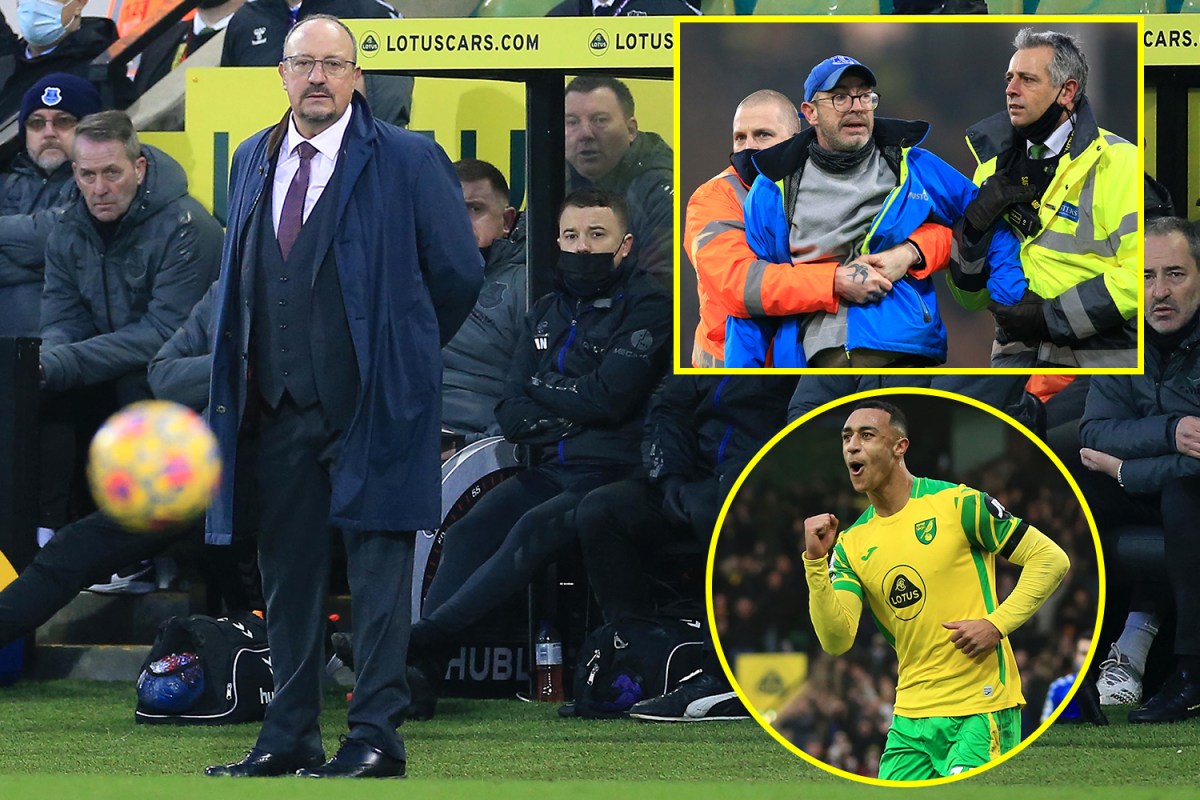 Rafael Benitez is in serious trouble at Everton with a 2-1 defeat to Norwich making their situation even more perilous.

The Toffees now have just one win in 13 matches – a run stretching back to October and they now sit only six points clear of the relegation zone.

Benitez just can’t get his Everton side going

A three-minute double salvo from Dean Smith’s Canaries did the damage early in the first half.

First an own goal from Michael Keane and then a toe-poke from Adam Idah, put Norwich ahead.

Substitute Richarlison did get a goal back for the Toffees but their hosts fully deserved the win, which takes them off the bottom of the table.

And furious Everton fans are set to make life difficult for Benitez now with banners in the away end calling for his head and one pitch invader attempting to confront the Spaniard before being hauled away.

The hosts looked lively from the off and other than a few graceful moments from Demarai Gray, they looked in control.

Norwich’s huge issue this season has been scoring goals and hadn’t netted for 550 minutes, but why worry if your opponents will turn the ball home for you?

With only 10 goals all season, it was perhaps no surprise the Michael Keane turned home Josh Sargeant’s ball across the six-yard box.

A mishap like that is frustrating, but Everton supporters’ fury was quickly on show when Adam Idah was able to poke home to double the Canaries’ lead.

Idah’s goal was his first in the Premier League

Manchester United loanee Brandon Williams had surged a full 60 yards downfield after robbing Anthony Gordon and a smart ball into Idah rounded off his superb participation.

Idah nearly lost out to Jordan Pickford but his effort bobbled into the back of the net.

A ‘Benitez Out’ was waved, while other supporters opted to chant the slogan.

Supporters are taking the banner to every game right now

Another somehow made it onto the field too, giving his view on the performance to the Spanish boss.

In response, the Toffees could only manage a couple of weak efforts on goal, all easily gobbled up by the Canaries.

One effort, from Vitalii Mykolenko, was so bad it became a crossfield pass.

Everton fan just invaded the pitch & tried to run across the other side to get to Benitez. Apprehended halfway there. pic.twitter.com/lxAAEluzsa

At half-time of the encounter, former Arsenal star Perry Groves laid bare how bad the situation was.

He told talkSPORT 2: “The pitch invader got closer to closing Pukki down than Godfrey and Keane did all half!”

“Everton have been abysmal. Norwich aren’t playing with a lot of confidence and Everton were so passive.

“It’s not like they’re beset with injuries. They’re all bona-fide first-team players.

“Doucoure and Gomes have been non-existent. Gray is the only one who looks up for this.

“Rafa will probably want to make about eight subs.”

But those substitutions did not come.

“Isn’t the sign of insanity doing the same thing over and over again and expect a different result?

Everton fans were unhappy for much of the game

Pierre Lees-Melou and Idah had more chances for Norwich before Richarlison and Yerry Mina were brought on to field.

And Groves, like many, queried why he hadn’t made the same change at the break.

Unsurprisingly, the switch, which also saw them move to a back-four, worked.

Both sides had further chances as it turned into an enthralling box-to-box clash.

But, while Everton stepped up their performance, the likes of Williams, Sargeant, Max Aarons, Grant Hanley, and Lees-Melou helped the Canaries cling on to a precious third win of the season.