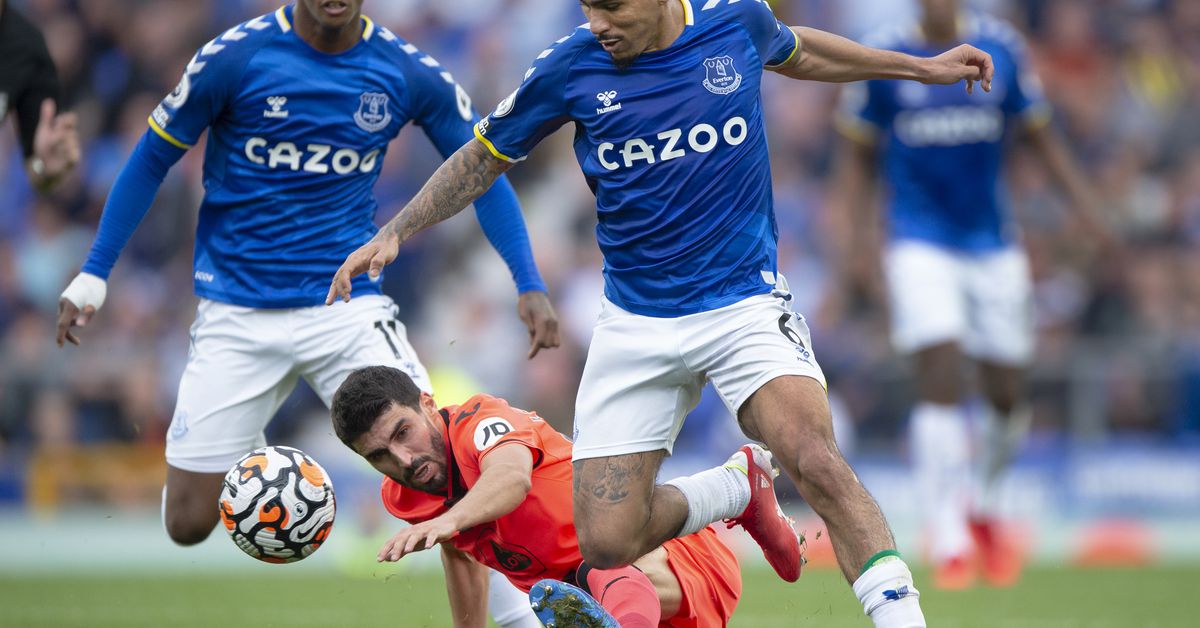 Everton kick-off a crucial run of fixtures with a trip to bottom club Norwich looking to revive their stuttering season.

Aston Villa, Newcastle, Leeds and Southampton all lie in wait in the next few weeks, as well as the FA Cup clash against Brentford and yet-to-be rearranged games with Leicester, Burnley and Newcastle again. Matches which could define the direction of the campaign in the spring.

It has been another busy week off the field, with Lucas Digne departing for Aston Villa while Anwar El Ghazi has completed a loan move the other way.

It is a shame to lose such a key player as Digne, but his parting shot at Rafa Benitez confirmed their relationship was beyond repair so a move away was best for all concerned.

The finances of the deal boosts Everton’s ailing balance sheet and has allowed the club to bring in two young full-backs, though time will tell whether it was the right move. There is a lot of pressure now on Andriy Mykolenko to hit the ground running.

However, the manner of the transfer has done little to quell the simmering discontent among the fanbase.

El Ghazi on the face of things seems a strange one given we are already well stocked with right-footed wingers. But a loan at least mitigates the risk and gives the club six months to assess the player’s abilities. We also don’t know whether there are any other outgoings lined-up this month.

There certainly needs to be more incomings, with centre midfield now a priority. Everton have at least been efficient with their business so far, with more than half the window left to continue the rebuild.

On the pitch they at least got the win against Hull in the FA Cup last week, though it was again far from convincing.

The chronic failure to defend set pieces remains, while some of the formations and tactics deployed by Benitez remain open to question.

It does little to convince me that a corner has been turned as the club look to dig themselves out of a rut that has seen them win just one Premier League game in 12.

If you think Everton’s season is bad, take a look at Norwich.

The Canaries’ reputation as a yo-yo club looks set to continue as they stare yet another immediate relegation in the face.

They are bottom of the Premier League having taken just 10 points from 20 matches so far. Daniel Farke was sacked in November (ironically just hours after their first win of the season) and replaced by Dean Smith, who took five points from his first three games.

However, they have since lost their last six league matches without scoring a goal, punctuated by a scrappy 1-0 win at League One Charlton in the FA Cup third round last weekend.

If you are not worried reading this then you are no Evertonian.

The Toffees should be winning this game – and that’s not a dig at Norwich, it is a fair reflection of the two playing squads. But Everton’s form is not that much better than the Canaries and they hardly shone when beating them at Goodison in September.

They will be eyeing three points from this game just as much as we are.

Remember when we all thought things were going to be ok? Goals from Andros Townsend and Abdoulaye Doucoure earned Everton a 2-0 win over Norwich in September that lifted them up to fifth. They have won just once in the Premier League since.

Everton have been boosted by the return to training of Dominic Calvert-Lewin, Yerry Mina and Richarlison, though it remains to be seen whether they will be fit enough to feature on Saturday.

Anwar El Ghazi could make his debut following his loan move from Villa, as could Nathan Patterson, who was an unused substitute against Hull last weekend.

Tom Davies is the only injury absentee after he had surgery on a hamstring problem earlier this week.

Everton boss Rafa Benitez: “We saw in the Cup game that this team can react… but we want to be proactive and be sure we can be ahead and win games this way.

“We approach every game with the idea we have to win

“The players coming back are still not fully fit… match fitness comes with games.

“But we are quite confident now we have people coming back and we cannot forget we have three games in hand.

“We need to be sure when we play these games and have some wins, we will be in a much better position and it will be easier to play in the way we want.”

Norwich boss Dean Smith: “Every game we play at the moment is a huge game. We’re more than aware of the bad run of results and we’re desperate to go and get a win.

“We’ve got some players back now who have got some minutes under the belt now who are ready for this game. We have to go and show it in front of our supporters.

“The performance was better against West Ham, but now we have to go and turn that into victories and goals, so that we can give the fans something to shout about on Saturday.”

Everton are in a no-win situation here. Anything other than a victory and the knives will be out for Benitez (again). In their predicament at the bottom of the table they have to be taking three points. Otherwise those lingering fears of an end-of-season relegation battle will rear fully into view.