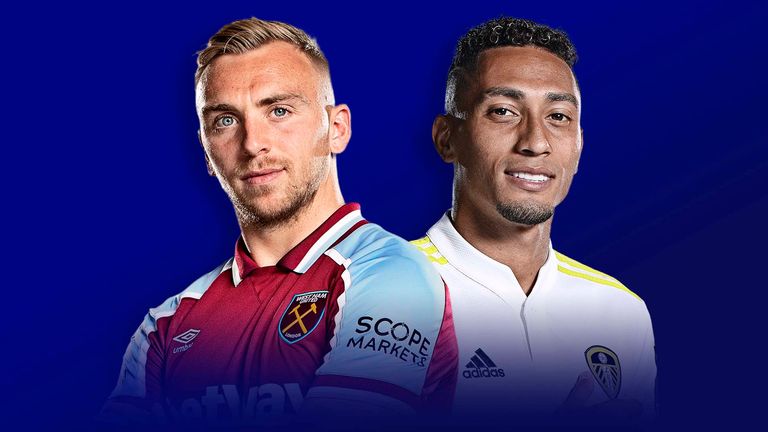 Team news, stats and prediction ahead of West Ham vs Leeds in the Premier League on Super Sunday; kick-off 2pm.

West Ham hope to have Tomas Soucek back for the visit of Leeds. The Czech midfielder missed the midweek win over Norwich after a positive Covid-19 test.

Defender Kurt Zouma is back in training quicker than expected after a hamstring injury and will be assessed.

Patrick Bamford, Rodrigo and Pascal Struijk are hoping to return to contention as Leeds' injury crisis shows some signs of easing.

Bamford has been sidelined with ankle and hip injuries, while Rodrigo (heel) and Struijk (foot) have been out since the end of November.

Eight other first-team players, including Kalvin Phillips and skipper Liam Cooper (both hamstring), are definitely out, with Diego Llorente and Tyler Roberts both suspended. The latter is also nursing a calf strain.

West Ham vs Leeds will be shown live on Sky Sports Premier League and Main Event from 1pm; kick-off 2pm. Sky Sports customers can watch in-game clips in the live match blog on the Sky Sports website and app. Highlights will also be published on the Sky Sports digital platforms and the Sky Sports Football YouTube channel shortly after the final whistle.

FREE TO WATCH: Highlights from Leeds United's win against Burnley in the Premier League

FREE TO WATCH: Highlights from West Ham's 2-0 win over Norwich in the Premier League

In the latest Essential Football Podcast, host Alice Piper is joined by Nick Wright, Charlotte Marsh, and Peter Smith to preview this weekend's Premier League action. Plus we hear from Sky Sports pundit Alan Smith ahead of the north London derby.

PART ONE | Alan Smith delivers his north London derby verdict ahead of Arsenal's trip to Tottenham and explains why the midfield battle will be key after the Gunners' tiring battle with 10 men at Liverpool on Thursday.

PART TWO | It's first vs second in the Premier League on Saturday when Manchester City host Chelsea. Is this the London club's last chance to stay in touch with leaders City? And could a win for Thomas Tuchel's side open the door for Liverpool, too? Plus we look ahead to Philippe Coutinho's Aston Villa debut, with Steven Gerrard's men facing an out-of-sorts Man Utd for the second time in a week.

PART THREE | Jarrod Bowen is in fine form and we take a look at the numbers behind his recent purple patch and discuss how it is driving West Ham back into the top-four race after their dip in December. Ahead of their match with Leeds we also examine how injuries have made life tough for Marcelo Bielsa this season. And finally, will Brighton or Crystal Palace come out on top in their rivalry showdown on Friday night?