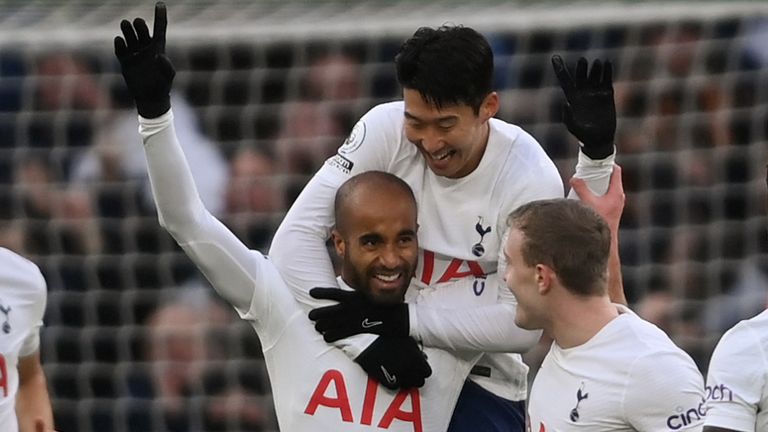 A stunning goal from Lucas Moura set Tottenham on course for a confidence-boosting 3-0 win over Norwich, which moves them above Arsenal into fifth place in the Premier League.

The Brazilian fired a rocket into the top corner of the Norwich net (10) to open the scoring and - while the visitors should have levelled on the hour mark through Adam Idah - two goals in 10 minutes from Davinson Sanchez (67) and Heung-Min Son (77) wrapped up a third Premier League win in four games for Antonio Conte.

While the Italian's undefeated start in the league goes on - and signs of progress under his management were clear to see - Dean Smith suffered his first loss as Norwich boss on a weekend when the Canaries slipped to bottom place in the table, with Manchester United next up.

Spurs, who turned patches of good play in the first half into an impressive second 45 minutes, are two points off fourth-placed West Ham with a game in hand, although Arsenal could move back above them when they play Everton on Monday Night Football.

In search of some consistency, Conte made just one change from Thursday's win over Brentford, with Japhet Tanganga in for the ill Emerson Royal, but it was Norwich who got off to the better start, with Teemu Pukki forcing a sharp, low stop from Hugo Lloris inside three minutes.

Oliver Skipp drove through midfield and hit a tame effort from distance as the hosts tried to get to grips with the contest - and then on 10 minutes a moment of pure class gave them the lead.

After some neat build-up play, Moura knocked the ball past Billy Gilmour, played a one-two with Heung-Min Son and, holding off Andrew Omobamidele, rifled a shot into the top corner.

It was just his second goal from outside the box in the Premier League but Moura looked for a second from a similar distance 10 minutes later, although this time a combination of Grant Hanley and Brandon Williams blocked his way.

Spurs were far from fluid but continued to create chances, with Son seeing a shot blocked after a swift move through the middle of the pitch, Ben Davies miscuing after Tim Krul missed a cross, and Kane drifting a lob just beyond the far post with the 'keeper stranded.

Norwich had dominated possession and enjoyed plenty of territory in the first half without carving out a chance as good as Pukki's early sight at goal - but really should have levelled on the hour mark.

Brandon Williams did well to get in down the right but when Pukki diverted his cross at Idah, the forward couldn't sort his feet out quickly enough to steer the ball on target from six yards out.

Just seven minutes later Spurs were two clear. Krul was at full stretch to tip a Kane shot around his post for a corner, and when the set-piece came in, Son's flick came off Ben Gibson kindly for Sanchez to blast in from close range.

Spurs were flying now and when Skipp, who caught the eye in midfield, played a wall pass for Davies to get into the box, the Welshman picked out Son, who bided his time before firing in low for the third.

Sub Josh Sargent miscued from a Pukki cut-back late on as the visitors tried to come up with a response but Norwich's promising first-half display in the end counted for little, with Spurs suddenly looking like they're on the rise under Conte.