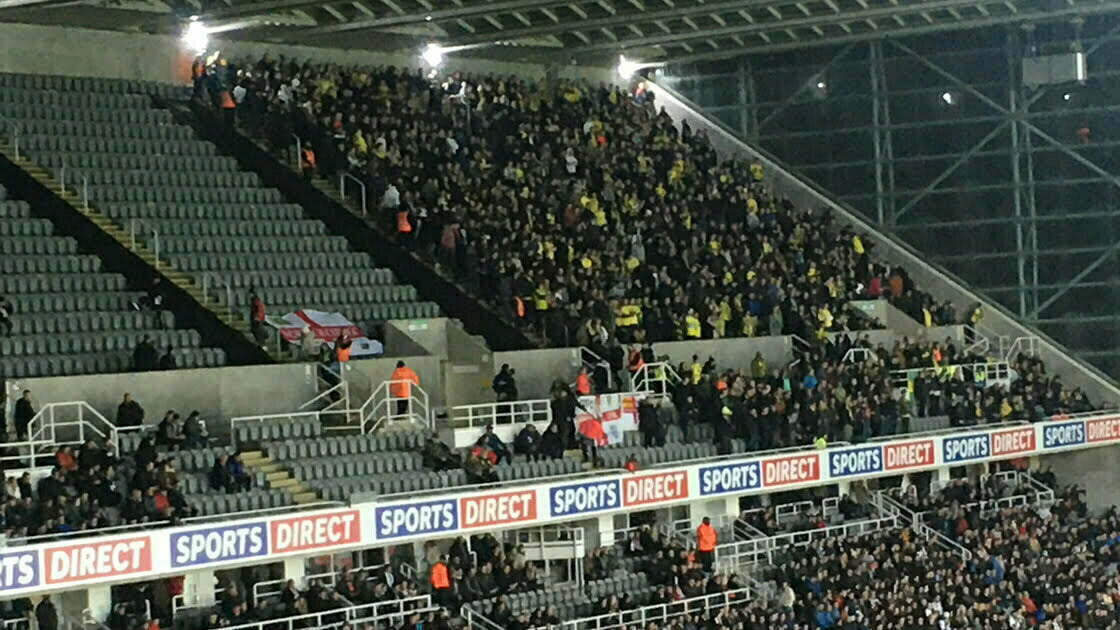 There wasn’t a lot of Norwich fans at St James Park.

When Ciaran Clark was sent off on nine minutes, those travelling Norwich fans must have been dreaming of a first win at St James Park since 17 September 1988.

Yes 33 years ago, Norwich came to Tyneside and won 2-0, the Canaries ended up fourth top of the First Division that 1988/89 season, whilst Newcastle United were bottom and relegated.

Interesting to look back, as only three years after the conclusion of that season, the newly branded Premier League kicked off in 1992.

However, in that 1988/89 season, the English top tier, as well as Norwich fourth, there Derby fifth, Coventry seventh, QPR ninth and Millwall tenth. Manchester United only eleventh that season…

Anyway, back to the present day and what did Norwich fans think of Tuesday night, was it a point gained at a place they never win at, or two points dropped after playing against 10 men for almost an entire match?

Some interesting comments as a fierce debate (well by Norwich fans standards!) ensues…

Norwich fans comment via their The Pink Un message board:

‘I think its fair to say that we are the only team in this division that would not have beaten a ten man Newcastle for over 80 minutes. Even against ten men we looked clueless going forward.’

‘Why don’t the PL make the Geordies do that for the remaining games so that you can be proved correct.’

‘Newcastle were at home with a new manager present for the first time. They were fired up. We handled that. They won a penalty and lifted the crowd. We came back.

We all want more but I honestly don’t understand the moaning. We are no longer ‘adrift’ and I didn’t expect that.

Get behind our fighting team!’

‘We went for it second half as I expected, and will take the draw – it’s far more damaging for Newcastle than it is us. 4 games no defeats, I believe we’re on the up and going to ‘do it’.’

‘No we didn’t. Only showed any sign of wanting to score after Newcastle themselves scored.’

‘We didn’t pass the ball around with any pace on it and were slow to switch or move it, especially compared to how we have been since he came in. Disappointing.

And secondly, I’m struggling to understand how we didn’t get a penalty first half?

Unfortunately, I’m not sure we deserved much more than a draw.’

‘Move on… We escaped with 1 point more than we deserved.’

‘Only one side deserved anything from that game and it wasn’t Newcastle: they had just one shot on target and that was from a dubious penalty and yet you think we were lucky? Looks to me that your village is missing its idiot.’

‘If we can play that awful yet still scrape a draw…

And away from home against a team we have never beaten in this divison at their stadium and with two of our best and most important first team players missing (three if you count cantwell) then well..

Not all bad right?’

‘Against 10 men. Defo 2 points lost. We should have been more ruthless and shown much more desire and bite.’

‘Without context yes. With context no it’s p.ss poor.’

‘That was down to luck and Pukki.

The team were horrendous tonight.’

‘We had a chance to put 6 points between us and the bottom placed team, but didn’t really look like being able to break them down until the Pukki wonder strike.’

‘Imo we’d have fared better against eleven – it’s a huge mistake to think it’s loads easier against ten men. There tends to be no more space in the final third , and it’s still difficult.

Ultimately, they had only one shot in target and that was from a slightly fortuitous penalty – the header was going nowhere. We could and should have won but I’m not going to complain about an away point in the PL.’

‘Yeah brilliant result when you consider they had one less player for 80 minutes and have not won a game all season buzzing with that result!’

‘Tonight was the best chance we will have at ending our appalling run of results against Newcastle at their place. It was also 2 points dropped, 2 potentially massive points.’

‘For me, it is as per the title. Not many teams would have a 1 man advantage for so long and not run out winners. It felt a little like we didn’t know this and were playing it far too coy for the most part. So much of our attacking play felt loose and vulnerable to fail. Displeasing to see, more so knowing we could come so close to safety with a win.

Not sure if anyone would agree, but the lack of Norman looked apparent tonight. I genuinely feel he could have made a difference in going forward and also defending Newcastle’s countering.’

‘I don’t think people are disgruntled with Smith or the team really, just a bit frustrated that we couldn’t capitalise on ‘Newcastle going down to 10 men so early in the game.

But I think that made the game harder for us as it made Newcastle sit deep and compact, and ideally we’d have space in behind for Pukki. Sometimes it is more difficult to play against 10 men.’

‘In the context of our season it’s a decent point, it’s just general frustration that we didn’t really take advantage of the extra man – although it made no difference to Newcastle defensively.

Of course, PLM had a golden chance and there’s an argument we should have had at least one penalty so it’s fine margins. The key point for me is, whilst down to 10 men Newcastle had that new manager feel and the crowd too – I never felt like we were going to concede until the pen was given. They couldn’t create anything significant in open play against us.’

‘Watched it on Amazon and the only thing that really annoyed me was Shearer whinging all the way through it.

‘It was scuffy but we got a point thanks to a great strike by Pukki. It’s tough to turn a jaggernaut round after so long off course but unbeaten in four is a decent start.’

‘Apart from a couple of the subs changing the pattern of our game, including the assist I also thought we dealt well with the physicality of some of their bigger players. St Maximam was well checked and although he did his usual runs (which often are a bit without end product anyway) he was often bundled off the ball. Shelvey was given a couple of crunching tackles.

I felt we controlled the game actually (and even felt so when they had 11 men). Yet, we looked bereft in that final third. Probably because Newcastle formed two banks of defenders. So, we troubled their keeper much less than we should. Think of Krul though, he had virtually nothing to do again.’

‘I take my cue from the manager. Doesn’t the report on his comments share the same point of view as the moaners (well he certainly concurs with my view). The Toon were there for the taking, and we didn’t! Nuff Said?’

‘To not beat a direct relegation rival who had 10 men for 80 minutes and not show any attacking intent until the last 10 minutes is quite frankly unacceptable. Dont think anyone should be happy with last nights performance.’

‘It seems a bit idiotic to not understand the moaning when you put lastnight into context. Newcastle are an extremely poor side who concede or fun yet we barely created anything against them with ten men for 80 odd minutes and we only looked like scoring in the last ten minutes. If anything the team with 10 men looked more dangerous than we did for most of the game.’

‘Aye; playing ten men doesn’t really make it any easier to score, it mainly makes it harder for the other team to. Packed defence, siege mentality, and we couldn’t just pile more men forward with gay abandon because Newcastle still had dangerous pacey players on the break.’

‘We played a motivated Newcastle side with their fans theoretically up for it seeing Howe for the first time, and defensively they got fairly little out of us despite the power and pace of Saint-Maximin, who is a definite candidate for “best player outside the top six” on his game. Ultimately, we played badly and got an away point, and if you’d asked most of us before the game, we’d have probably taken a point.’

‘It’s not news to anyone that’s Alan Shearer is a Newcastle man. Overall he was mostly very fair and even corrected a couple of fouls for Newcastle that he didn’t think were fouls / should’ve gone our way.’

‘If anything, Shearer was overly lenient. Amazon set the whole game up as the Newcastle show so it’s more their fault. We deserve any grief we get after that.’

‘I was actually pleasantly surprised, feared the worst when they said he was commentating but thought he was ok on balance.

If you want biased listen to Robbie Savage during any Man U game on BTSport- dreadful.’

‘Had no problem at all with the commentary . Rightly slaughtered Clark and although clearly magcentric thought he gave us a fair hearing . Also said he was disappointed at our performance (as we all were) because he had been impressed with our recent form.’

‘I thought he was very honest and only commented on our lack of performance where it was utterly slow and clueless.

Of course he’s Newcastle through and through, had Holty been commenting I’m sure he’d refer to Norwich as his team the same.’