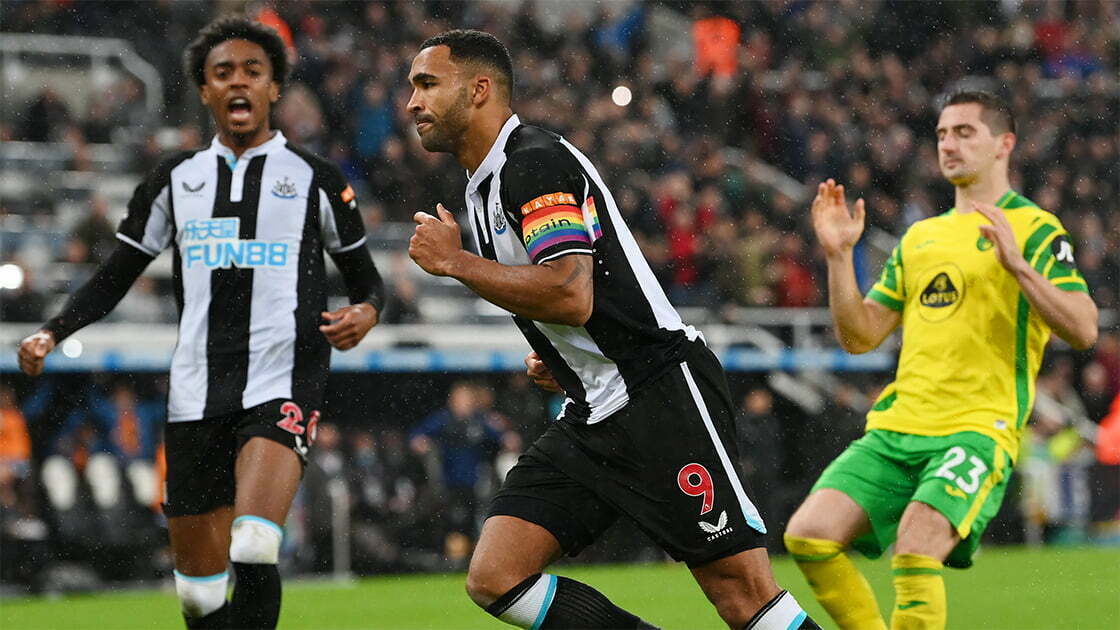 We asked Ben Cooper to give us his match ratings and player comments after Newcastle 1 Norwich 1.

Newcastle United hit by the hammer blow of having to play all but the first nine minutes, a man down.

Despite Clark’s red card, United taking the lead with a second-half Callum Wilson penalty, only for Pukki to ensure the points were shared.

He is a good keeper, one of our best players.

He made some good saves and gave the defence the organisation and confidence it needed after the early setback.

He should have done better for the Canaries goal, he could have caught or let go the cross which led to Pukki’s equaliser.

He could have done anything except push it out to a Norwich player ten yards from goal.

Perhaps he thought Norwich were so rubbish they were never going to score. He definitely saved NUFC a point when Schar’s late error led to a one-on-one which Dubravka saved brilliantly but I can’t help feeling that the save would not have been necessary without his earlier error. It was looking likely that United would have seen the game out.

That is how it is for keepers. Ask David Seaman. Doesn’t matter how good you are, all people remember is your stupid ponytail and getting lobbed from forty yards. Twice. Dubravka also time-wasted from the tenth minute without any intervention from the referee, a much better effort than Karl Darlow who would have been sent off twice for keeping us all there till midnight.

Like all of the outfield players he deserves a ten out of ten for effort but given that he had very little to do, he did well.

Once United went down to ten men the remit became much simpler and that is right up Manquillo’s Calle. Hold your position, run all day and make sure no one gets past you.

Eddie Howe has tried all three right backs at the club in his first three games and while he may decide to swap them around for tactical reasons, he must now know that Manquillo is the best one of the three. Or the least worst one.

He did what he had to do and prevented the hapless Josh Sargent scoring in the first half. Apart from that he held his position and competed well. He looked rusty and nervous but that is understandable given that he hasn’t played for months.

Even more understandable given who he was playing alongside at the start and the circumstances after ten minutes.

Now that they have seen Lewis, presumably his new masters know that he can make a contribution and will seriously consider giving him a run in the team. There isn’t much alternative.

Schar brings at least something to the party.

I am not his biggest fan, I find his defensive limitations often cost United goals and they nearly did against Norwich. He isn’t great in the air, isn’t physically strong, doesn’t have much pace and gets caught in possession far too much. He did in this match, trying to dribble out from the back after 94 minutes and losing out, Dubravka’s late save sparing his blushes.

When he is not lying down injured, what he does bring is experience, good positional sense and an ability on the ball which means the teams have options other than giving it to Shelvey or banging it long, which Schar can also do as well as anyone on the team. He is definitely a good player, if not always a good defender.

‘Ciaran Clark? Only Don’t Tell Me That You’re Innocent. Because It Insults My Intelligence And It Makes Me Very Angry’

Just a similar expression to the one which Michael Corleone had on his face when he shut the door on the ex-Mrs Corleone in The Godfather 2.

I have always thought that the money spent on him was money well spent and he has always played above his ability with obvious passion and commitment. Until last night. Having waved his foot at a clearance when the ball should have gone back to the keeper and seen the rebound put Pukki through on goal, he should have let Pukki run through on goal. Pukki isn’t Messi, he might have missed. Even if he didn’t, better to be 1-0 down after ten minutes than one man down after ten minutes and a free kick they might have scored from anyway.

Clark instead decided to pull the Norwich Elf back, committing the most obvious of red cards, meaning his team had no chance of winning a game they had to win and sentencing the fans to watching eighty-odd minutes of torture.

All I know is that in a long list of most stupid NUFC moments that is right up there. I can give it no worse comparison than to say it was Boumsong-esque. Thanks for your efforts Ciaran, I don’t expect to see you in the team again.

Fraser: No mark achievable. No difference there.

Genuinely wasn’t on the pitch long enough to make a contribution.

Which is probably his best game in a black and white shirt.

‘Jonjo Shelvey: he can’t believe he didn’t get man of the match’

Shelvey was often quoted as being a player who stuck up for Steve Bruce and sang his praises. Those words look like bluff now. Shelvey has been transformed as a player by the change in Manager.

What NUFC have now is a player who is good on the ball, makes things happen, can run for a full game and looks like he wants to do so.

Shelvey was a massive part of getting a point in this game and good on him for it. I have been a big critic of him in the past but when he plays like this, he deserves all the praise I can give him.

Worked hard. Lacking confidence and contributed little to the effort apart from running and covering. His place in the team is currently solely down to former glories.

He needs to re-glorify and quickly if he wants to stay in the team. Subbed after 73 minutes.

A fine performance from the Brazilian under-achiever. Another player who has been rejuvenated since Bruce left.

His tireless work rate and physical presence was a major reason for a point and he seems to be relishing a more involved role. He still lacks confidence (or ability) when going forward and if he had made more of the positions he got himself into he would have been in with a shout of man of the match.

When the sound of trumpets die down for his effort, let’s not forget he is an attacking player who is in the team to attack and he needs to do better at that. Still, a fine effort.

Got a good write up on a couple of match summaries I saw but I thought that although he worked hard, his play was laboured. He certainly isn’t the player he was last season. Just like the team, perhaps time has caught up with them.

It was tough for him up against the massive Norwich defence but like Maxi, if anything is going to come out of this season except relegation in March, the team needs more from Wilson.

Nearly missed a penalty but that doesn’t really matter because it went in. Just.

He was out of sorts against Norwich.

He hasn’t been in the last couple of games though, which happens with his type of attacking player, if he could do it every week he’d be playing for Bayern Munich. He didn’t do it last night.

We need him to start doing it again very soon. Subbed after 77 gruelling minutes.

It has been a learning curve for Howe.

Hopefully he now knows that no matter what anyone else has said, Fernandez is consistently the club’s best defender and should start every game he is fit. He was excellent against Norwich. A top-class performance. Man of the Match.

On for ASM after 77 minutes. Ran around and gave the team legs when they were running out of them. Falls down too often and too easily. Nothing much comes of what he does.

Like many of the attacking players who are misfiring, if Howe can get the attacking balance of the team right then there is a place in it for Almiron. He does the right things and that counts for something. It isn’t always his fault if nothing comes of what he does. He gave the team a lift in this game.

I completely understand why Hayden was thrust into battle after 73 minutes. Willock was looking exhausted, United needed a sterner defence.

Hayden contributed very little to the fight but it won’t have been easy for him, both in the state the game was in and that he has gone from one of the first names on the teamsheet to making up the numbers.

He is obviously slowly getting there. The team seem fitter and more energised.

Bringing in Dubravka is a step forward, bringing in Manquillo, Lewis and Fernandez another one, it just looks like he has done that out of necessity rather than liking what he sees.

Shelvey and JoeLinton look like new players and all of the players look more comfortable playing in a back four and something like 4-4-2. Against Norwich, Maxi played left and Fraser right and I can see why he is trying things.

Unfortunately, he doesn’t have any time to spare and his forward line for the second game running was poor, especially considering how many attackers are in the team. He needs to resolve that quickly and not just by keeping eleven players on the pitch. He has made steps forward but he needs to win games (even if trying to win them means he loses them) rather than drawing them. Time has run out.

I will criticise him when I feel it is appropriate, as it was in returning Clark to the team and playing an obviously broken Willock, but these are short-term criticisms not long term despair, as with Bruce.

I am interested to see how Howe (what?) improves and he has my backing for the next eighteen months, at the end of which I expect the club to be in the Premier League. Winning ‘must win’ games will be a big part of that.

It didn’t happen this time around and it really should have done. Norwich were absolutely hopeless.