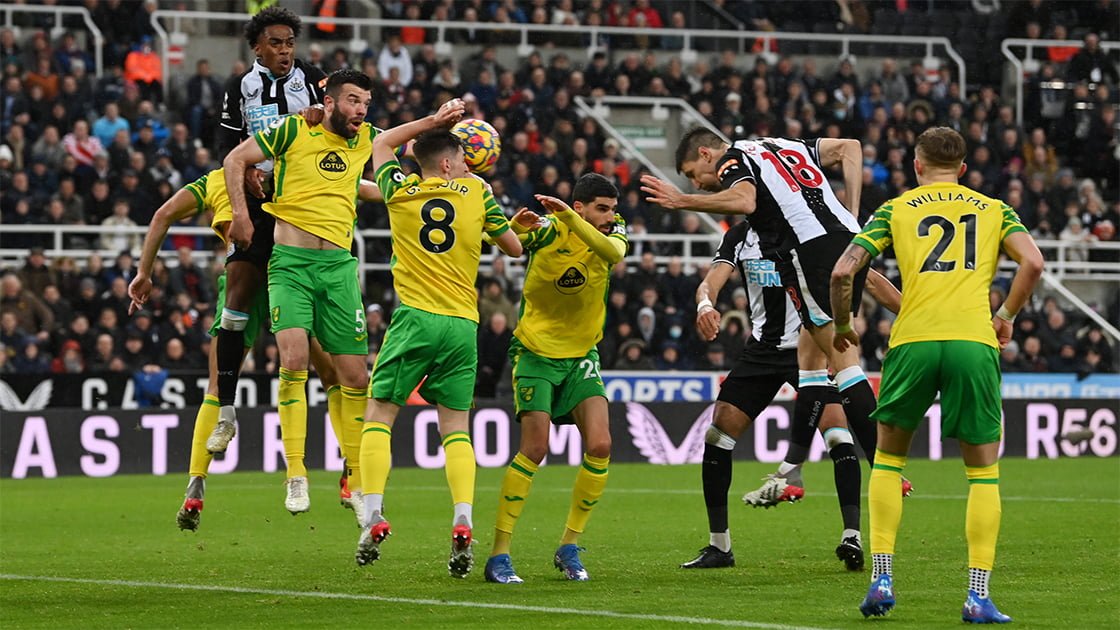 Dean Smith watched on as his team made it three games unbeaten since he took over.

A draw at Newcastle to go with a home win over Southampton and a draw at Carrow Road against Wolves.

When you include the fact that Daniel Farke won his final game, 2-1 away at Brentford, before getting the sack. An obvious upturn after a start to the season where Norwich had lost eight and drawn two of their first ten Premier League matches, failing to even score in seven of the ten games.

Tuesday night’s match was completely turned on its head after only nine minutes, Newcastle United had gone for another fast start, as they did in Eddie Howe’s first match at home to Brentford.

In that opening match of the Eddie Howe era, the early pressure brought a tenth minute goal courtesy of Lascelles’ header from a corner.

Last night, on nine minutes that early NUFC pressure culminated in a long high ball knocked forward by Norwich to relieve pressure BUT instead of dealing with it, Ciaran Clark had a moment of madness and weakly played the ball against Teemu Pukki, then as the Norwich forward went past him with just Dubravka to beat, Clark somehow in the moment thought going down to ten men with 81 minutes still left, was preferential to trusting the NUFC keeper in this one on one.

Dean Smith says his choice would have been no red card, with the provision that Pukki would have been allowed his one on one scoring chance. The Norwich boss claiming that the sending off galvanised Newcastle United and they defended deep and well.

To be honest, I think even if Newcastle had gone behind at that point, I believe that with 11 men on the pitch NUFC would have come back and won. So for me, the red card obviously massively helped Norwich. Though they are so poor they couldn’t take advantage of the extra man. No disrespect to them, simply a fact that they are one of the worst teams in the Premier League and will be relegated this season.

As for Newcastle’s penalty, no surprises that like pretty much every other Premier League manager, when a VAR decision goes for a team they agree, when it goes against them they are not happy, Dean Smith is no different.

When you see the image above and the TV replays, with the rules as they are now, that is 100% a penalty. Arm fully outstretched and above the shoulder, how the referee on the pitch instantly didn’t give it is a total mystery.

Newcastle United had three very decent penalty claims at Arsenal, the Fabian Schar one an absolute certainty as he was rugby tackled to the ground, only for VAR to somehow look at it and not give it, when the score was still 0-0.

It would have been beyond cruel if this Norwich one hadn’t resulted in a spot-kick.

Dean Smith coming up with a laughable load of waffle about a referee on the pitch should have more say etc etc but at the end of the day it was a nailed on decision that even Newcastle United had to be given, once VAR flagged up what the referee on the pitch had missed.

“I have seen it back and does it hit his arm? Yes.

“For me the referee knows it has hit his arm as well, but he’s decided to give a corner [and not a penalty], because of the proximity of how close it was.

“I am told that there is a law that says, if your arm is above your shoulder it should be a penalty, but come on!

“If it take 90 seconds to make a decision in the studio [VAR] then surely that is not a clear and obvious error.

“I’m just disappointed, as at the moment I don’t feel that on-field referees are given enough responsibility in making big decisions.”

“I’m frustrated and disappointed because it was probably the worst out of the three performances that we have had [after beating Southampton and drawing against Wolves] and obviously the game plan changes after ten minutes, when Ciaran Clark gets sent off.

“I’d much rather Teemu [Pukki] had gone through and scored the goal, rather than it go ten against eleven, because they were camped in their half for long periods and defended their box really well.

“We didn’t do enough to win the game because we didn’t show enough quality in the final third in all honesty.

“We changed to 4-3-2-1 to give our full-backs the out ball, but we just never showed the quality in the final third, I felt we were a little bit pedestrian on the ball, needed to be quicker.

“It wasn’t until we scored that we moved the ball with any kind of tempo and pace, Teemu scored a wonderful goal, but we never did enough of that after the sending off and because of that, we never made enough big chances.

“I felt Newcastle going down to ten men gave everybody that mentality of everything is against us, let’s stay together, and I thought they defended their box really well as well.”

“We knew it was a big game tonight, probably bigger for Newcastle than ourselves, because they hadn’t won this season yet.

“It keeps that unbeaten run going and defensively I thought we were good, we didn’t give away many chances.

“I told them to keep their heads at half-time because Newcastle will be looking to get set pieces and that’s where they end up getting their goal from, but the perseverance and the character of the players is there for all to see, we kept battling away and got a point in the end.”