Can Howe create 'masterpiece' amid madness that is Newcastle United?
BBC Sport 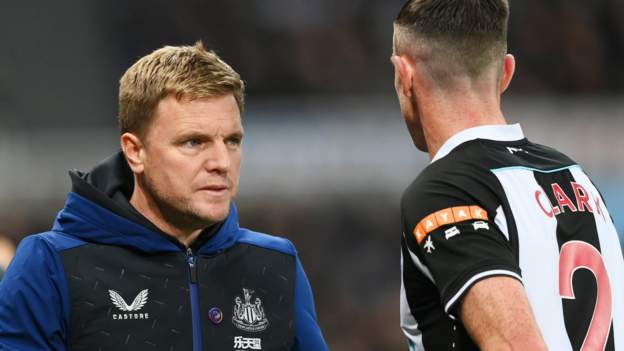 Newcastle's Ciaran Clark was sent off after nine minutes

It has only been three weeks since Eddie Howe was appointed but he must already have pondered the unique nature of Newcastle United Football Club.

He only became the new head coach after the club botched their pursuit of Villarreal boss Unai Emery.

Then, the night before the former Bournemouth manager was expected to take charge of his first home game, he was struck down with Covid-19.

And when he finally got to manage his team at St James' Park, against Norwich, his new side were down to 10 men within nine minutes.

"Make each day your masterpiece" is a key phrase used in Howe's coaching philosophy, and it was emblazoned across a banner at the Gallowgate End prior to kick-off. Ciaran Clark then scribbled all over it like a toddler.

Strangely, though, it galvanised a team which has the worst defence in the Premier League and almost earned what could have proved a transformative win after Callum Wilson's second-half penalty.

But as Newcastle's fans will tell you, drama never strays far from St James' Park. As a first win of the season came into view, the otherwise impressive home keeper Martin Dubravka pawed away a late cross, leading to Teemu Pukki's 79th-minute equaliser.

In normal circumstances a point after having a man sent off so early would represent a good result, yet these are far from normal times on Tyneside.

After a £305m Saudi Arabian-backed takeover seven weeks ago, which led to fans calling themselves the richest club in the world, Newcastle remain rooted to the bottom of the Premier League table with relegation looking more likely the longer the season goes on.

"The challenge ahead is huge," said Howe afterwards. "We're under no illusions as to the size of the task we face. We need to get the wins we need - draws aren't going to be enough."

Howe keeps cool amid the madness

Once again, this was a game which showed Howe the best and worst side of Newcastle.

Roared on by 50,000 fans on a wet but mild night at St James' Park, the team pressed and battled against Dean Smith's Norwich, who sit three points and now two places above them.

Without suspended skipper Jamaal Lascelles, stand-in captain Wilson led from the front as the team pressurised their opponents to the point where an unexpected victory looked likely.

They certainly appeared fitter, with three weeks of training under Howe already looking to have added a new dimension.

Two minutes before Wilson's 61st-minute penalty, Joelinton, Allan Saint-Maximin and Federico Fernandez, who replaced Clark, were quick to close down the Norwich defence near their own corner flag. Howe approved.

"You need the spirit in the group to deliver what we need, and I feel it has grown," he said. "That's going to be key for us."

Flanked by his assistant Jason Tindall, Howe never sat down in the dugout during the game as he cajoled his players.

He praised Joe Willock and Jonjo Shelvey, who dovetailed successfully in midfield, and he described Fernandez, who has been left out of the team this season, as "absolutely magnificent" and "an ultimate professional since I arrived at the club".

His stay in the team may be prolonged by Clark's suspension. There were no words between Howe and the centre-back as he trudged off following his pull-back on Pukki with the Norwich striker bearing down on goal.

But Howe soon refocused and the tactical tweaks to manage the game at 1-1 told of a head coach who is constantly thinking about the next move.

The problem for Newcastle is that in a week in which they will also face fellow bottom three side Burnley, a point does not make significant inroads into the gap between them and their rivals and repeated failures to win will have wider consequences.

Leeds' injury-time victory over Crystal Palace does not help either, with Marcelo Bielsa's side moving further away from the relegation zone, having started the day in 17th place.

Newcastle's match against Burnley on Saturday is followed by a daunting run of fixtures in December, with games against Leicester, Liverpool, Manchester City and Manchester United all to come.

Howe said prior to the game that his side's league position would be more of a barrier to bringing players in during the January transfer window than any reservations about living in the north east of England.

He said: "It's very difficult to make any promises of saying we will definitely spend money and sign players but I can promise the owners will support me and the team in trying to achieve what we need."

If that sounded cautious for a team which is now 80% owned by Saudi investors worth hundreds of billions of pounds, it also echoes noises coming out of the club that there will not be a transfer splurge.

There is no set budget, "transfer kitty" or "war-chest". Instead, the club will focus on what they need, and whether they can improve on the players they have, but most importantly whether those players are available.

Then there is the small matter of convincing them to join a team which could be destined for relegation. As Howe said on Monday: "January is an incredibly difficult time to recruit, especially when your league position is difficult."

Whatever improvements Howe can make on the training pitch, it is individual errors which have cost them wins against Brentford and Norwich in consecutive home games.

Improving the backline would appear a priority, with more protection in front of the back four coming a close second.

Howe praised his team's defensive resilience, and it was certainly appreciated by fans as their manager walked around the pitch to thank them after the final whistle.

Despite the effort from the players, the "really special atmosphere" from the crowd and the attacking talent he can call upon, he added: "It's in our own hands but every game we don't win, it becomes harder."