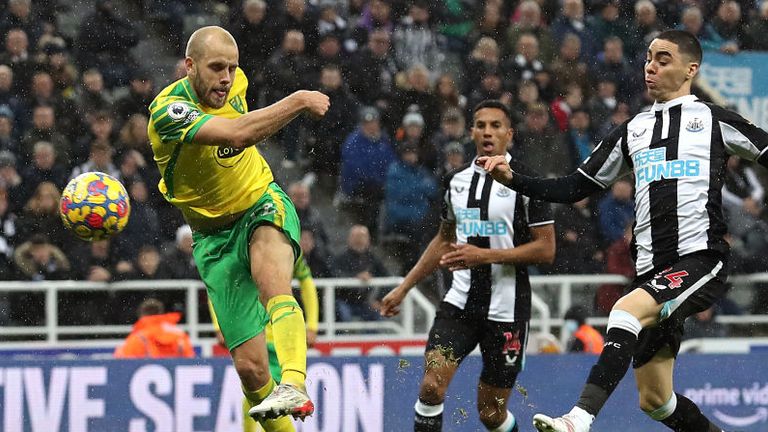 The pressure was on for both sides heading into the game, occupying the bottom two spots in the league table. Eddie Howe's first game in the dugout at St James' Park started in the worst possible fashion, too, when Clark was sent off inside nine minutes after a foul on Pukki.

But Norwich offered very little in response as 10-man Newcastle went ahead early in the second half. There were huge appeals for a penalty as Federico Fernandez's header hit Billy Gilmour's raised arm, and after a lengthy VAR check, the spot-kick was awarded.

Callum Wilson (61) - named Newcastle captain in the absence of the suspended Jamaal Lascelles - took the penalty, which former Magpie Tim Krul pushed onto the underside of the crossbar before it nestled into the back of the net.

9' - Ciaran Clark's ninth-minute red card is the second-earliest red card a Newcastle player has been shown in a Premier League match, after Nikolaos Dabizas away to Blackburn in October 2002 (fourth minute). Rash. pic.twitter.com/V9hrRpCCSq

But with around ten minutes to go, a stunning volley from Pukki (79) denied Newcastle their first league victory of the season. They are now the fourth side to have failed to win any of first 14 games of a Premier League season and remain rooted to the bottom of the table.

While Norwich were guilty of some sloppy play at St James' Park, they are now unbeaten in three games under Dean Smith and four overall, moving up to 18th with ten points. However, Burnley in 19th have two games in hand after their match against Tottenham on Sunday was postponed due to heavy snow.

Image: Ciaran Clark was sent off for pulling Teemu Pukki down early in the game

Inside nine minutes, Newcastle were down to ten men. Clark's poor clearance landed straight at Pukki, who immediately started towards the goal. Clark gave chase before tripping the Norwich striker over, with Andy Madley immediately pulling out the red card. Clark waited for the VAR check, but the decision correctly stood.

With the man advantage, Norwich tested Martin Dubravka immediately after. Gilmour delivered a wonderful free-kick, which the Newcastle goalkeeper saw away with a leaping save. In the 20th minute, the hosts had their best chance of the first half, but Joelinton's sweet strike from range curled into the stands.

Man of the match: Jonjo Shelvey.

Just before the half an hour, Norwich had a superb chance to take the lead. Christian Tzolis swung in a fizzing cross from the left, with Josh Sargent waiting at the back post. However, Jamal Lewis did enough to block the ball behind.

Both sides continued to see half chances as the game drew towards the break. Tzolis twice tested Dubravka - his first a stooped header before a second late strike, but both were easy collections for the goalkeeper. Newcastle captain Callum Wilson also fired an effort into the stands after some superb work from Joe Willock down the left.

There was more early drama in the second half. Joelinton had a strong penalty shout turned down, before Newcastle were awarded a spot-kick soon after. Fernandez nodded a Jonjo Shelvey corner goalwards, and it hit the raised arm of Gilmour. It took two minutes for VAR and referee Madley to make a decision, but the penalty was eventually given.

Wilson stepped up to take it, facing Krul, who is renowned for his ability to save penalties. He almost did with Wilson's effort too, getting an extended hand onto the ball, but sent it onto the underside of the crossbar and into the back of the net.

Image: Callum Wilson fired Newcastle ahead from the penalty spot

But with just over ten minutes to go, Norwich hit back with a fantastic goal from Pukki. Dubravka did well to save from Gilmour's initial effort, but Newcastle did not clear their lines. Dimitris Giannoulis found Pukki in the middle, and the striker hit it with a first-time volley to fire into the back of the net.

The visitors could have won it in six minutes of injury time too. Fabian Schar's sloppy pass landed to Pierre Lees-Melou's feet and he drove into the area. He only had to beat Dubravka, but the goalkeeper did superbly well to stick out a leg to see the ball loop wide.

Man of the match - Jonjo Shelvey

It was a good midfield performance from Shelvey. His forward passes picked out players with superb accuracy. Thirty of his 42 pass were successful - the highest of the Newcastle team. He had 54 touches and made two interceptions.

Newcastle now host Burnley at 3pm on Saturday in the Premier League, while Norwich are at Spurs on Sunday at 2pm.