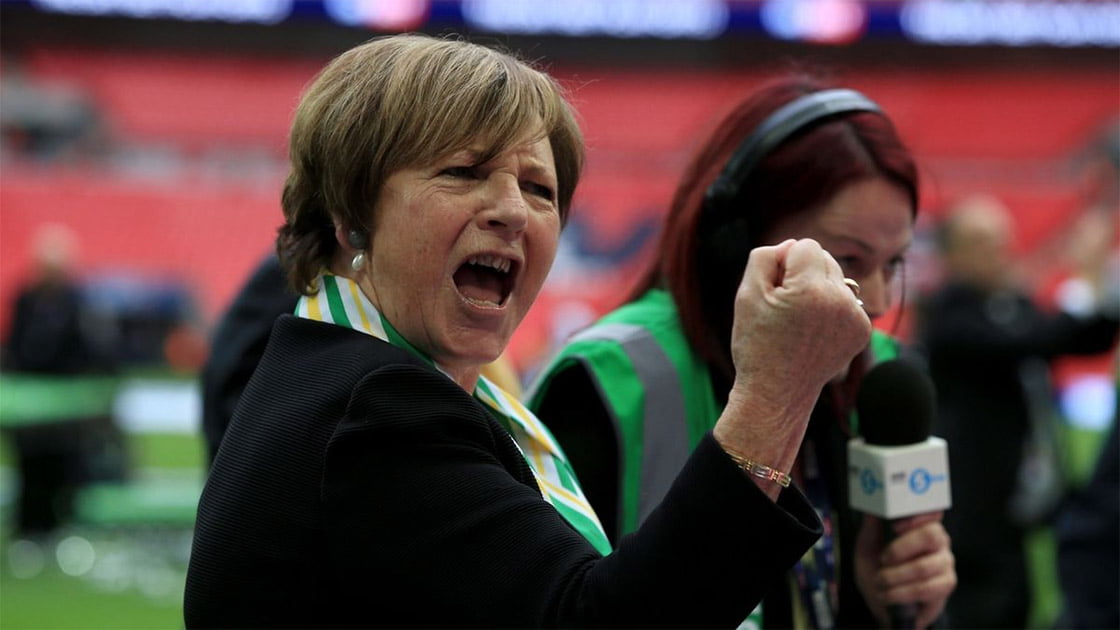 Delia Smith made headlines, when on 28 February 2005, she strode onto the pitch at half-time in high heels.

Norwich City were deep in relegation trouble and after taking an early 2-0 lead, had conceded twice to Manchester City.

The rest as they say, is history.

Obviously not happy with support from the home terraces, Delia Smith grabbed a microphone and implored the Norwich fans…’A message for the best football supporters in the world, we need a 12th man here. Where are you? Where are you?! Let’s be ‘avin’ you! Come on!’

The Norwich fans did wake up to an extent but a red card midway through that second half set Norwich back and just when they looked to have held onto a point at least, Robbie Fowler scored a last minute winner. From 2-0 down to a dramatic 3-2 win for Man City, you could almost think this was Kevin Keegan type stuff…and it was, KK overseeing this City comeback win.

Everybody assumed Delia Smith was drunk but she denied this afterwards.

Moving on to the present day, I’m not advocating Amanda Staveley striding onto the pitch at half-time on Tuesday night…against Norwich, or getting drunk before watching the match, though I do hear that it might help on occasions…

However, I do want to invoke the words and spirit of Delia Smith and challenge Newcastle United fans: ‘Where are you? Where are you?! Let’s be ‘avin’ you! Come on!’

Norwich City went on to be relegated that season, despite Delia’s best efforts, I don’t want the same to happen with Newcastle United.

If it happens it happens BUT I can accept that, IF we have all done everything that we can to prevent it.

I can’t say that is the case at the minute.

In the 27 months that Steve Bruce was here as Head Coach, only on one occasion was there over 52,000 paying customers inside St James Park. That was for the 3-2 defeat by Tottenham, Steve Bruce’s LAST game, though most importantly, the new owners’ FIRST match.

The combination of Mike Ashley and Steve Bruce had led to over 10,000 season tickets going unsold this season.

When the new NUFC owners were handed the keys to St James Park on Thursday 7 October, I was on the phone first thing on Friday morning to buy season tickets, to replace the ones I had chucked in when Ashley forced out Rafa and enough was enough (for me anyway) in terms of feeding Ashley season ticket cash.

Even though I was happy to pay full price for the season tickets despite some matches already played, the lass I spoke to said that you still couldn’t buy them, as that was the rule once three home games had gone (Leeds on 17 September 2021 had been the third SJP match of the season). However, she did say to keep an eye out for Newcastle United half season tickets possibly going on sale around November or December time.

I have been keeping a very close eye and nothing doing so far.

The fact that so many season tickets went unsold due to Ashley and Bruce, has produced a knock-on problem for the new owners.

The two biggest games of the season at St James Park in the next five days and as things stand, there will be a fair few empty seats.

I went on the official NUFC club ticketing site this morning and I was shocked really to see just how many are still unsold. Not going back to anything like we saw under Mike Ashley BUT enough unsold to make me think we are bound to see empty tickets at both the Norwich and Burnley matches.

I have got zero doubt that the games later in December against Man City and Man Utd will 100% be sold out…BUT it is these games against Norwich and Burnley that are the massive ones, that could dictate the direction of this club for years to come.

Win both of them and Eddie Howe has a great platform to then try and avoid relegation, including throwing everything at all future games, including those ‘more attractive’ ones against the Manchester clubs in a few weeks time. However, if these two relegation rivals aren’t beaten this week, it may end up all a bit pointless.

We need every single seat inside St James Park filled to try and help get those wins against Norwich and Burnley. At the end of the season, if / when Newcastle United have avoided the drop and the excitement is building on what transformation we can expect in that summer 2022 transfer window, you can look back and say I was there on that freezing November night / December day to do my bit against Norwich and Burnley.

A quick count up this Monday morning on the NUFC ticketing site showed almost 1,000 still unsold for Norwich and over 1,100 for Burnley. However, that doesn’t include the tickets that would normally be filled by away fans. Burnley took an allocation of 1,624 rather than the full 3,200 maximum and they still have tickets for sale.

Especially midweek, I’m assuming Norwich will bring that 1,624 figure as a very maximum.

Meaning we have almost certainly another 1,600 or so to sell for both matches. On the NUFC ticketing site, these sections usually for away fans that the away club doesn’t take, only show as on sale and available once all of the other home areas are pretty much sold out.

So basically, we are probably looking at somewhere around 2,500 to 3,000 mark still unsold for both Burnley and Norwich.

However, if you can get to these matches and haven’t got tickets so far, for whatever reason(s), please get on the phone or online ticketing site and get these remaining tickets bought up. Don’t sit there on Tuesday night and wonder why you can see empty seats on Amazon Prime that could and should have been filled by Newcastle fans supporting their team, in the biggest game of the season.

Let’s be ‘aving you.