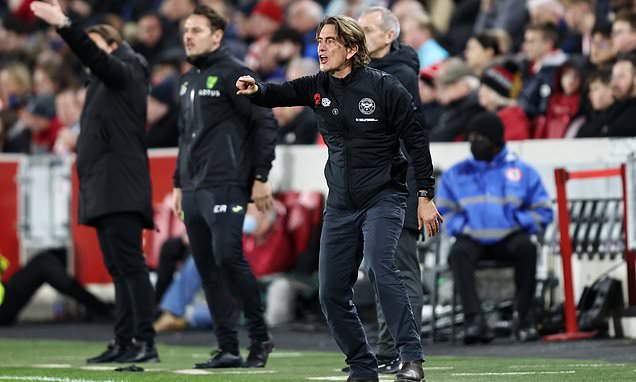 By Gerry Cox For The Mail On Sunday

Thomas Frank has spoken up for managers by asking club chairmen to think twice before sacking them.

Brentford’s boss says he feels relatively secure but believes other clubs jump the gun. Notably, after the visit of Everton today, the Bees will face Antonio Conte’s Tottenham, Watford under Claudio Ranieri and then Manchester United when Ralf Rangnick is likely to be in charge.

Aston Villa, Newcastle and Norwich have also sacked their managers in the past month with the latter getting rid of Daniel Farke just hours after his side won at Brentford.

‘There are too many changes too quickly,’ said Frank. ‘I’m not speaking about a specific club but if you believe in your manager and the [club’s] strategy then that makes success. You can just see that with Ferguson and Wenger.’


Frank and his staff have taken Brentford to two successive play-off finals including promotion last May on a minuscule budget.

‘I think I’ve proved myself. We’ve proved ourselves and I always say it’s not me, it’s us. We do it together. But it’s not us who get sacked. It’s me!

‘You can’t do it alone, you need good people and I’m very pleased to be surrounded by fantastic staff and especially the top ones in this group, Matthew Benham [owner] and the sports directors Rasmus Ankersen and Phil Giles.’