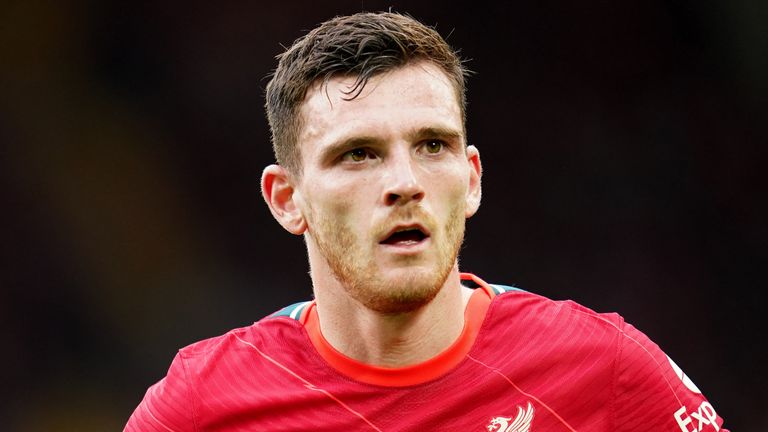 Team news, stats and prediction ahead of Liverpool vs Southampton in the Premier League on Saturday; kick-off 3pm.

Andy Robertson could return to the Liverpool starting line-up when Southampton travel to Anfield on Saturday.

Robertson has been sidelined with a minor hamstring strain but made a late substitute appearance against Porto in the Champions League on Wednesday and could start.

Southampton are boosted by the returns of Nathan Redmond and Moussa Djenepo ahead of the trip to Anfield.

Redmond returns after missing Saints' last outing due to the birth of his child, while Djenepo was an unspecified absentee in the defeat at Norwich. Stuart Armstrong (calf) is out again.

Follow Liverpool vs Southampton in our dedicated live match blog. Highlights will also be published on the Sky Sports digital platforms and the Sky Sports Football YouTube channel from 5.15pm on Saturday.

FREE TO WATCH: Highlights from Liverpool's win over Arsenal in the Premier League

FREE TO WATCH: Highlights from Norwich's match with Southampton in the Premier League.

Southampton have the manager to cause Liverpool a serious problem in this game but he just hasn't got the tools at his disposal. Ralph Hasenhuttl is giving everyone a timely reminder of his talents this season, moulding a very average squad into a confident and impressive unit. When a top-six team takes a chance on him, it will be a decision they won't regret.

Anyhow, it's likely Jurgen Klopp's men will out-ruthless Saints in both boxes, but I want to back the visitors to be smart enough to get into some dangerous positions with some dangerous counters. That has led me to showing some interest in the amount of corners Southampton can win at Anfield.

Southampton have won the third most corners in the Premier League this season (75), racking up a tally that reads: 8, 6. 8, 10, 7 from their last five fixtures as the attack-minded nature of their full-backs sees plenty of opportunities for corners being won down the channels.

Sky Bet's line for them to win four or more at 11/10 certainly has a chance of landing. Saints managed to win five corners at Manchester City this season and have accumulated four or more corners on their last three visits to Anfield under Hasenhuttl, including 11 in the 4-0 defeat in the 2019/20 season.