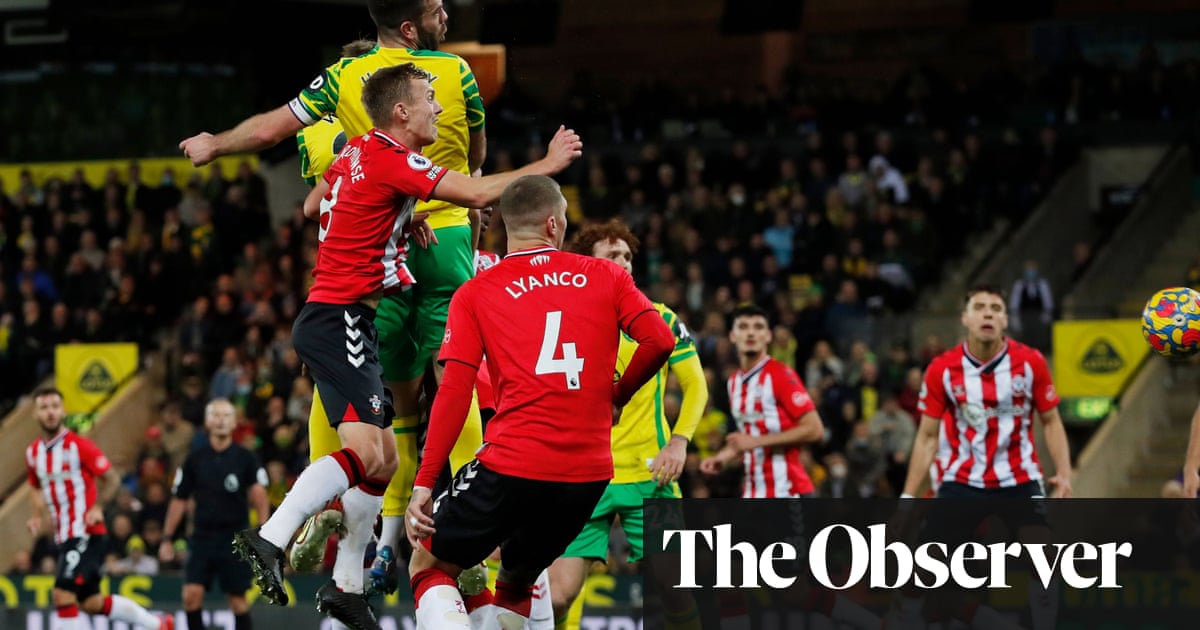 When Dean Smith took to the Carrow Road pitch and introduced himself to the supporters of his new team, a chant went up immediately: “Deano! Deano!” He may only have joined Norwich City five days previously, but there is something about Smith that has immediately endeared himself to this corner of East Anglia.

Perhaps its the avuncular look or the informal style: while Ralph Hassenhüttl came to the field in a pinstripe suit and designer trainers, Smith had a cardie and a puffa. Perhaps it was also his positive messages this week, stating clearly he believes Norwich have enough quality and time to avoid the drop. Or maybe it was just the sense that the guy knows what he is doing, something he certainly reinforced here as Norwich seized control in the second half to claim victory over Southampton.

On a trip to see his son in New York, as he mulled the prospect of the Carrow Road job, Smith said he watched five Norwich games back to back on the plane. The opening of the match would have been familiar to him then; a combination of weakness and bad luck that ended in the home side going behind.

Smith made his first impact by restoring two of Norwich’s more talented players, Billy Gilmour and Todd Cantwell, to the team. But within four minutes Kyle Walker-Peters cut outside his man on the left to with ease to find Adam Armstrong who bested Gilmour in a mismatched duel. Grant Hanley cleared the ball, but only so far. It was turned back in towards Che Adams, the striker had the better of his Scotland teammate and found a good finish beyond Tim Krul inside the far post.

So far, so painfully familiar for the Carrow Road crowd. What happened next, however, was a pleasant surprise. Three minutes later Milot Rashica got close to Walker Peters and was waved on by the ref after scruffily winning the ball. The Kosovan winger exchanged passes with Max Aarons, before finally releasing the full-back to the byline. Aarons had to stretch to make it and was off balance as he dug out a cross. The delivery, however, was spot on and Teemu Pukki darted in to divert a header powerfully inside the near post.

It was a quickfire flurry that suggested the prospect of a slugfest. Instead, however, Norwich soon found themselves playing rope-a-dope as Southampton seized possession and probed down the left time and again. With Mohamed Elyounoussi coming inside into midfield, and Walker-Peters stationed high and wide, Southampton continually asked questions of Norwich’s marking. Rarely did the Canaries find the right combination, but last ditch blocks from Hanley and Ben Gibson kept Southampton at bay.

Dean Smith celebrates with his players after the match. Photograph: Andrew Couldridge/Action Images/Reuters

Smith looked to solve the issue down his right by bringing Josh Sargent on for the lacklustre Cantwell at half-time, Rashica switching left. Now Norwich began to grow into the match, with Sargant doing the job asked of him and Rashica darting down the other wing. Just before the hour mark Hassenhüttl responded, withdrawing Elyounoussi and adding Armando Broja to his forward line. Five minutes later and Adams was replaced by Theo Walcott.

If Hassenhüttl had sensed a turning tide, he was right. Norwich continued to have the better of the second half, if like Southampton earlier, without creating too many clear opportunities. Matthias Normann saw a long range effort go just over in the 66th minute, an inspired Pukki forcing a reaction save from McCarthy 10 minutes later.

With 10 minutes remaining the decisive moment arrived, however. A long spell of Norwich possession ended with a Rashica cross being diverted over the bar. Gilmour stepped up for the corner, drifted it to the back post and there was Hanley to banish any bad memories with a downwards header that beat McCarthy in the Southampton. The crowd exploded. “Dean Smith’s Yellow Army” was the chant now.