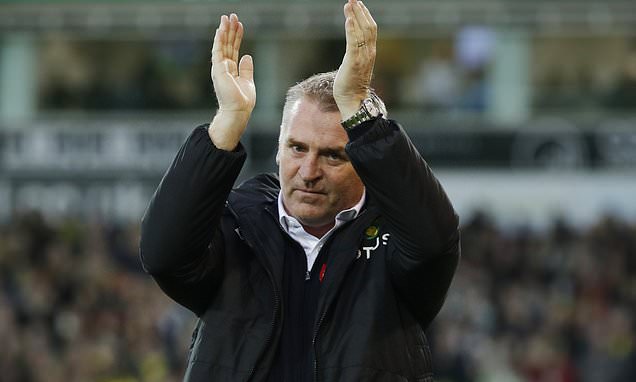 He was fired by Aston Villa, cycled round Central Park, visited the Empire State Building, took a look at the Statue of Liberty, hired by Norwich and then picked up three Premier League points.

What a fortnight for Dean Smith. He knew there would be turbulence, and not only because of that jaunt to New York amid his eight days of unemployment. This job, of trying to pick the Premier League's bottom side up off the basement floor, was never going to be a smooth one.

This 2-1 win over Southampton was the dream start, however. Maybe, just maybe, they can survive, after all.

Norwich had to do it the hard way. They had lost their last 33 Premier League matches when conceding the opening goal and Che Adams struck inside four minutes here at Carrow Road.


Yet goals from Teemu Pukki and Grant Hanley completed the turnaround, ensuring it would be a winning start for Smith. The roar at full time told you the supporters believe they can get themselves out of trouble, now that they have 'Deano' at the helm.

Before kick off, the players walked out of the tunnel, and so did Ralph Hasenhuttl in his three-piece pinstripe suit, but Smith didn't. He held back in the tunnel, awaiting his introduction. 'Canary fans,' the announcer shouted from the speakers, 'please welcome our new coach.'

Smith received a rousing ovation from his new support. Smiles were wiped from faces in the fourth minute, however, when Adams opened the scoring for Southampton.

The ball was under Adams' feet and he had Hanley all over him, but he managed to get his shot away. It trickled into the bottom right corner, beyond an annoyed Tim Krul.

Southampton's giddy supporters started to sing: 'You're getting sacked in the morning.'

This wasn't in the script for Norwich, but then the smiles were brought back.

In the seventh minute, Max Aarons crossed to the near post. Pukki met it and, making a mockery of the acute angle, headed past Alex McCarthy.

Norwich were back in it, but Southampton were the ones on top. James Ward-Prowse had a go, as did Mohamed Elyounoussi and a few others.

It was like watching target practice, with Smith soon learning why his new side rank so high in the Premier League's shots faced table.

Whenever Norwich won the ball in their defensive third, they were lumping it long towards a stranded Pukki, who was getting gobbled up by Jan Bednarek and Mohamed Salisu. It meant Smith's side were spending most of this match out of possession.

As half time approached, the shot count read one for Norwich – the one they'd scored – and 10 for Southampton.

Their 11th arrived when Hanley carelessly lost possession. Adams unleashed, but Krul superbly stopped him from making it 2-1 with an outstretched right hand.

It remained 1-1 at the break, but Southampton could have had three or four goals. Smith knew that, too, and so replaced Todd Cantwell with Joshua Sargent for the second half.

It gave Norwich a greater presence in the final third, as Milot Rashica tested McCarthy after a nice turn on the ball then Sargent saw another chance deflect wide. Suddenly they were shooting and it was Southampton who couldn't get out of their own half.

In the 76th minute, a counter-attack led by Pukki ended with McCarthy having to push his effort wide. In the 79th, Carrow Road erupted. Gilmour took a corner from the left, and Hanley headed home, making it 2-1 to Norwich.

Smith was on the verge of becoming the first Norwich manager to win his opening Premier League game since Mike Walker in 1992. Southampton wanted to spoil the party, of course, and Theo Walcott would have if only he'd directed his free header on target.

Thankfully for Smith, he missed, and so Norwich were the winners.