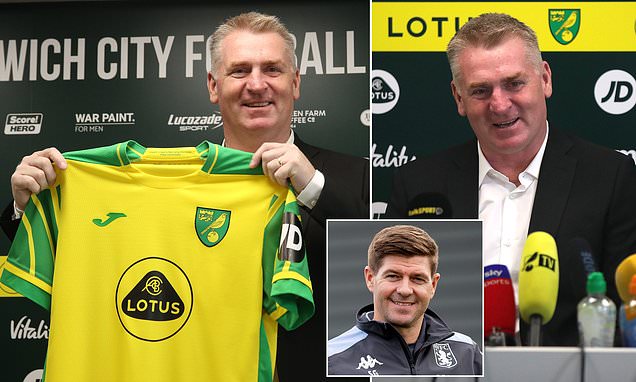 Dean Smith insists he wishes Steven Gerrard every success after seeing the former England midfielder replace him as Aston Villa manager, so long as it does not come at Norwich City's expense.

Smith saw his three-year spell in charge at his boyhood club come to an end following a run of five straight defeats in the Premier League.

Villa worked quickly to bring in Gerrard from Rangers, while Smith was also able to move on quickly to pick up the vacant role at Carrow Road.

And Smith insists he has no ill feelings towards the man who has replaced him.

Smith has replaced Daniel Farke in the Norwich hotseat, despite the German leading the club to their first win of the season in his final match.

Farke had spent four years at the club, where he won promotion twice to the Premier League.

Smith admits he is taking over from someone who has done much to improve Norwich's standing within the English game, but insists there is enough quality at his disposal to maintain their Premier League status.

The Canaries are currently bottom of the table on five points after 11 matches, five points off safety.

'I know Daniel and I like Daniel very much. He’s done fantastic at this football club and it’s never nice for someone to lose their job,' said Smith.

'We were both in the same position within 24 hours and it’s not nice. I’m also very respectful of the work he’s done at this football club and it’s some big shoes to fill that’s for sure.

'We’ve got 27 games to get as many points as we can to stay in this league. When I’ve spoken to Stuart and seen the squad at the club I believe it’s capable of doing that.

'The club got their first win away at Brentford in their last game and we can build on that confidence the players should have got from that.'