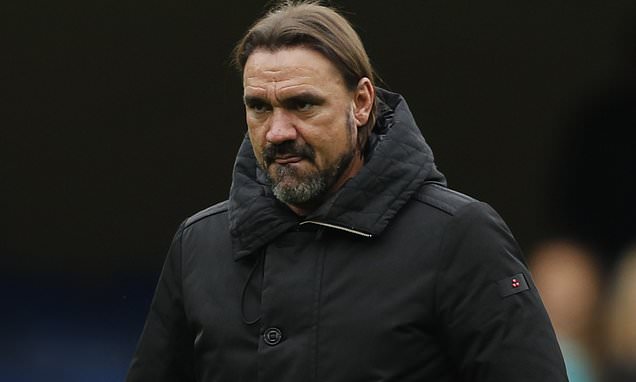 Daniel Farke's future is under threat after Norwich’s 7-0 defeat at Chelsea, with the German’s authority being questioned by both fans and pundits.

City fans took to social media to call for Farke to go after their mauling at Stamford Bridge, their worst defeat since losing 7-0 to Manchester City in 2013.

Norwich have not lost by a greater margin in 113 years, and look doomed to another relegation, having won the Championship twice under Farke.

Former Chelsea and England star Joe Cole, speaking on BT Sport, wonders if Farke has lost the plot and the dressing-room. ‘That’s not a blip,’ Cole said.


‘I’ve watched Norwich, I look at the players and I don’t think they’re playing for the manager when you see things like what Ben Gibson did today, that lack of professionalism.’

Gibson was sent off after two rash fouls in the space of 10 minutes, leaving his team-mates down to ten men for the final 25 minutes. ‘I think it looks like they need a fresh voice in the dressing-room,’ continued Cole.

‘There was no fight and no passion from the players. Norwich were all over the shop. They changed their system to 5-2-3 as Farke tried to match Chelsea up, but it is a terrible decision to make.

‘It’s all about defending the counter-attacking. You have to recover into positions, you’ve got to keep the score down.

'You have to be committed and they weren’t. The manager has to take responsibility because he got it wrong but it didn’t look like they were playing for him.

‘The problem is with Farke. How many players have been brought in? Today it looked like Chelsea were playing against Under 18s in terms of physicality.

'He looks like a nice guy but today they were so far off it even though Chelsea were without Kante, Werner and Lukaku.’

Farke admitted he was bitterly disappointed and questioned the speed of his players, both physically and mentally.

‘It’s an unbelievably tough day. In all areas we were not good enough for this level,’ he said.

‘We spoke about this before the game. We were nowhere near to what we can play. We were too slow in all areas.

'We were too slow in the head. For this world-class level we were not competitive enough, there was no pressure on the ball.’

Yet Farke said losing to the league-leaders and European Champions was not a true test for his side.

‘It was clear before the game that it would be a tough task. This is not a season-defining game — that will come against Leeds at home, or Brentford. These are the type of games where we need to pick up points.

‘It’s not the right moment to start a discussion [about relegation]. It’s not the time to talk too much, it’s time to roll the sleeves up and work. I’m just focusing on how I can help the team.’