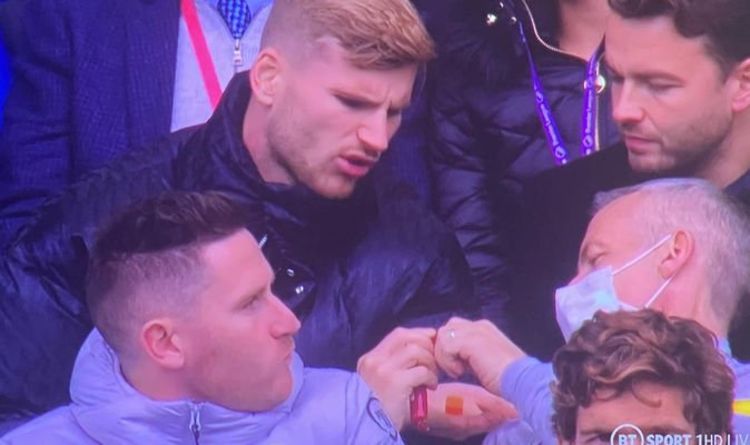 Chelsea star Timo Werner has gone viral for his hilarious reaction for receiving a yellow wine gum during today’s Premier League win over Norwich. The Germany international missed the match at Stamford Bridge through injury. But that didn’t matter, with the Blues cruising to a 7-0 win over Daniel Farke’s team.

Chelsea ran riot against Norwich on Saturday, extending their lead at the top of the Premier League table in the process.

Mason Mount bagged a hat-trick, coming after the England international had previously failed open his account for the season.

And Reece James, Ben Chilwell and Callum Hudson-Odoi - as well as an own goal from Max Aarons - saw them pick up all three points.

It was a fine day for everybody involved at Chelsea.

But Werner didn’t appear to be having the best time on the sidelines.

The Germany international was seen being passed what appeared to be an orange wine gum.

“It feels horrible for Daniel today – I hope he keeps his head up and puts his team back on track. He deserves it and he’s a good guy.”

“In all areas we were not good enough for this level. We spoke about this before the game.

“We were nowhere near to what we can play. We were too slow in the head. The goals we conceded were not even too difficult to defend against. For this world-class level we were not competitive enough.

“It’s important to always put pressure on Jorginho and Kovacic and also to protect the runs.

“I wish we’d done better in certain situations. We didn’t show enough quality to be competitive.

“At this level you always have pressure, but I’m just focusing on how I can help the team.

“It was clear before the game that it would be a tough task. At home to Leeds – these are the type of games where we need to pick up points.

“It’s not the right moment to start a discussion [about relegation].

“It’s not the time to talk too much, it’s time to roll the sleeves up and work.”