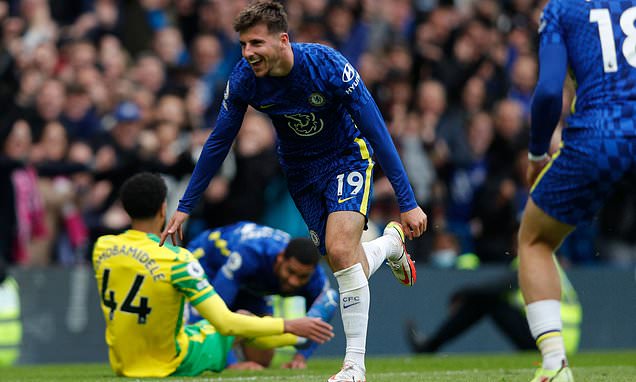 Mount grabbed his first first hat-trick for the Blues in the 7-0 thrashing of the Canaries to end his goal drought which dated back to the Champions League semi-final win over Real Madrid back in May.

Joe Cole lauded the 'versatile' 22-year-old as 'one of the outstanding performers in the country' and like Cole, Chris Sutton questioned why some fans don't rate the England international.

Speaking on BT Sport, Cole said: 'No he doesn't (get the plaudits he deserves). He does from within the game. He's becoming one of the outstanding players in the country. There is a swell of unusual fans that don't get it.'


'It must be a tribal thing. I'm yet to meet an ex-player or coach that has a bad word to say about him.'

There have been players that were maybe good enough to get through that didn't get chances. Chelsea kept persevering with their academy. They're the fulcrum of the team.

'Every great team has a core of local players who connect with the fans who know what it means to be a Chelsea player. James can really push anyone in that right-back spot.'

'He's such a versatile player, he takes on information. He's a wonderful player, I don't get the doubters.'

He added: 'For Chelsea it's about winning trophies but they've got a crop of youngsters, any club in the country would want them, the likes of Mount, Hudson-Odoi. This is why I think Chelsea will win the league, they've got the strongest squad.'

The 7-0 thrashing of Norwich leaves Chelsea four points clear the the top of the Premier League after nine games.