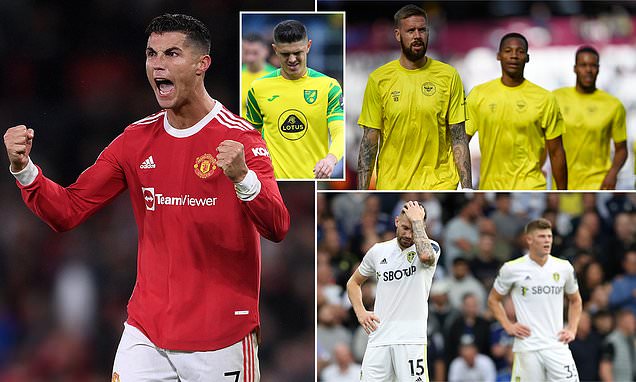 The 36-year-old is the best-paid player in the top-flight, after completing his return to Old Trafford from Juventus at the end of the summer transfer window.

And according to numbers by Sportrac, that is more than what Leeds, Brentford and Norwich pay on their entire squads.


Daniel Farke's side who sit bottom of the Premier League are said to pay their players an estimated salary of £24.2m over the course of a year.

Leeds United who returned to the Premier League last season after 16 years away, pay their side £17.9m.

Norwich's squad combined earn slightly less than Ronaldo with £24.2m over a year

Leeds who returned to the top flight last year pay their entire squad a combined £17.9m

(Club's estimated salaries as per Sportrac)

Meanwhile Brentford have the smallest budget out of any in the division, paying their players just £12.8m per year.

With Ronaldo coming to the Premier League, he overtook Kevin De Bruyne as the highest earner with the Belgian on wages of £385,000 a week.

Manchester United are also the team that spends the most on salaries out of any team in the top flight by some distance.

They pay a combined £226.6m on players' salaries which is £64m more than Chelsea who come second in the list with an estimated salary of £162.6m.

Among United's biggest earners are David de Gea on £375,000 per week and Jadon Sancho who now earns £350,000 per week since his arrival from Borussia Dortmund.

Unsurprisingly, the Premier League's 'big six' are the highest spenders on wages with Manchester City third in the list ahead of Liverpool, Arsenal and Tottenham.

Everton, West Ham, Leicester and Crystal Palace round out the top-ten in the list.

While Ronaldo's wages are the highest in the league, United are expected to benefit commercially from the deal.

It was previously reported that the Portuguese maestro's iconic No 7 shirt brought in £187.1m in eight days after his transfer was confirmed.