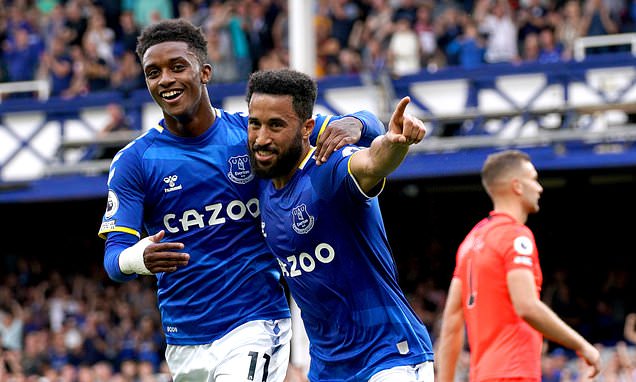 It may not be pretty, but Rafa Benitez is developing a squad that knows how to win at Goodison Park.

Everton secured their fourth victory of the season against Norwich to move up to fifth in Premier League, level on points with Chelsea, Manchester United and Manchester City.

Goals in either half – a penalty from Andros Towsend and a cool finish from Abdoulaye Doucoure – proved enough to see off a dogged Canaries outfit, even if it was not the most convincing of displays.

It is results that matter however. Daniel Farke knows that only too well. He’s now lost 17 straight top-flight fixtures, stretching his own unwanted record ever further. For Benitez, it is a satisfying end to a challenging week.


There had been concern that Everton’s season has already peaked.

Their unbeaten start to the Premier League campaign was obliterated at Villa Park last Saturday, while their Carabao Cup quest ended at QPR after a penalty shootout defeat.

With Richarlison and Dominic Calvert-Lewin both still out and James Rodriguez’s move to Qatar side Al-Rayyan confirmed midweek, there are also concerns over just where the goals are going to come from at present. In the meantime, Townsend appears willing to fill that creative gap.

Both sides rested a sizeable chunk of their first-team options in the cup midweek, but it took those restored to the line-ups here a while to get up to speed.

Though the hosts were in the ascendancy, the opening quarter of an hour was punctuated with mis-touches and misplaced passes from both sides. It wasn’t until the 18th minute that Everton carved the first opening.

Alex Iwobi used the ample time and space afforded to him down the left to drill in a low ball that was controlled by Salomon Rondon. The Venezuelan touched the ball off to Andros Townsend who shaped to curl the ball into the far corner, but only succeeded in firing straight at Tim Krul at his near post from the right-hand edge of the six-yard box.

Townsend made no mistake with his next opening, though. Norwich were the architects of their own undoing as Ozan Kabak’s wild swing caught Allan inside the area as the Brazilian threatened to burst through on goal.

Referee David Coote originally saw nothing wrong with the challenge, before being advised by Lee Mason, situated in Stockley Park, to go check the VAR monitor. From there the awarding was a formality.

Townsend had picked the ball up as soon as Coote had jogged pitchside and Tim Krul did his level best to put off his former Newcastle team-mate. The forward ignored the words in his ear and sent the Dutchman the wrong way to score his fourth goal in all competitions for the Toffees this season.

Sensing blood, Benitez’s men kept the pressure on. Demarai Gray, going in search of a fourth goal in Blue himself, saw his curling effort from inside the box headed away by Kabak.

The onslaught never came however, and the half ended with Farke’s men edging their way back into the game, the home crowd audibly on edge as Mathias Normann’s effort from range forced Jordan Pickford into his first meaningful save of the afternoon.

Norwich’s holding midfielder tested the England No 1 again five minutes into the second half, this time from the edge of the area, and with a bit more venom. Pickford, showed no sign of the shoulder strain that had kept him out their last Premier League clash with Villa, flying across his goal to palm the ball behind.

For all Everton can point to a far better start to the season than their opponents, this is not a side that has yet learned how to control games.

For long swathes of the second half they invited Norwich to attack, the support around Goodison growing restless at wave after wave of florescent orange shirts pushing forward.

Norwich though, have their own creativity issues. Farke’s side have found the back of the net just twice since returning to the top flight. For all their industry on Merseyside, they never looked like adding to that.

And that there is the difference between a top-half side, and one anchored to the foot of the table.

Despite an abject second-half showing, Everton still created the better opening. They took it, too. Pierre Lees-Melou was caught in possession just inside his own half. Gray pressed on and laid the ball into the path of Doucoure, who fired low beyond Krul. The spark hasn’t deserted Benitez’s side quite yet.