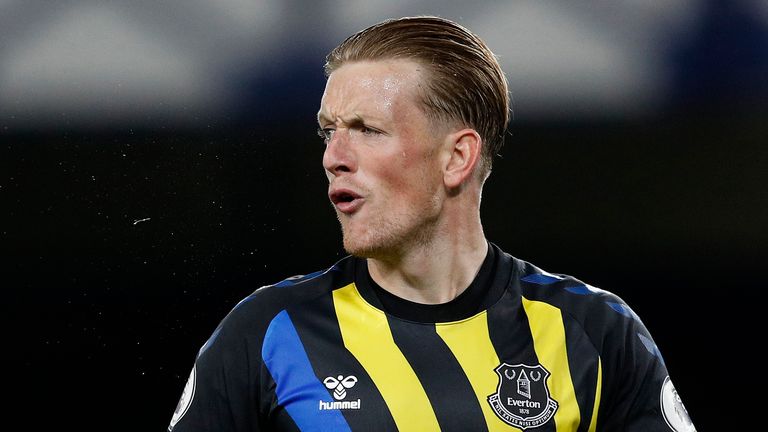 Team news, stats and prediction ahead of Everton vs Norwich in the Premier League on Saturday; kick-off 3pm.

Jordan Pickford is set to make his return to action for Everton in Saturday's Premier League clash with Norwich at Goodison Park.

The England goalkeeper, sidelined after suffering a shoulder injury sustained against Burnley on September 15, has been back in training, along with full-back Lucas Digne, who sustained a calf issue in Tuesday's Carabao Cup tie at QPR.

Andre Gomes also picked up a calf problem in the cup tie and will not be involved, and the Toffees still have Dominic Calvert-Lewin (quadriceps), Richarlison (knee), Seamus Coleman (hamstring), Jean-Philippe Gbamin (quadriceps) and Fabian Delph (shoulder) unavailable. James Rodriguez has left to join Al-Rayyan.

Norwich will again be without defender Christoph Zimmermann and midfielder Todd Cantwell for the trip to Merseyside.

Centre-back Zimmermann is carrying an ankle problem, while Cantwell remains unavailable because of personal reasons.

Przemyslaw Placheta is stepping up his recovery from a pre-season coronavirus infection, with full-back Sam Byram (hamstring) also still not fit.

We take a look ahead to this weekend's action as Chelsea host Manchester City, Aston Villa travel to Manchester United and Arsenal & Tottenham face off in the north London derby

Follow Everton vs Norwich in our dedicated live match blog. Highlights will also be published on the Sky Sports digital platforms and the Sky Sports Football YouTube channel at 5.15pm.

FREE TO WATCH: Highlights from Aston Villa's win over Everton

FREE TO WATCH: Highlights from Watford's win over Norwich

Everton are set to be without Jordan Pickford, Seamus Coleman, Richarlison and Dominic Calvert-Lewin this weekend. Alarm bells should be ringing for anyone wanting to back them at odds-on.

Not many Premier League teams could cope without being able to pick their four best performers, even against what looks the worst team in the division. I am not sure of Everton's strength in depth in forward areas.

They created a lowly expected goals figure of just 0.67 in the 3-0 defeat at Villa without Richarlison and Calvert-Lewin. Their overall numbers when one of those two is missing do take a nosedive. The win percentage stands at 51 per cent with either one of or both Richarlison and Calvert-Lewin in the team and drops to 33 per cent when one or both is missing. The average goals also drops from 1.4 per 90 minutes to 1.1.

With that in mind, I am happy to get Norwich on side with odds-against on their chances of avoiding defeat. Daniel Farke's team have lost their last 15 Premier League games, granted, - the longest run in top-flight history with the same manager in charge. However, sandwiched between those seasons was a Sky Bet Championship title-winning one. They have the tools to compete with an under-strength Everton.

Interestingly, the Toffees have lost three of their last four home Premier League games against sides starting the day bottom of table, including against Norwich in 2019. I am happy to play the away win at almost 5/1 with Sky Bet.