Farke has 'credit in the bank' at Norwich
BBC Sport 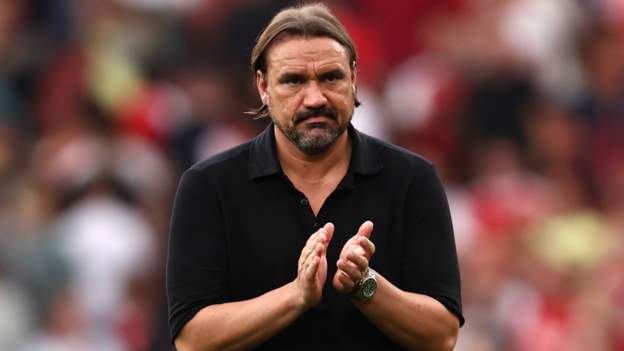 Norwich City boss Daniel Farke says he feels he has "credit in the bank", and the club are not looking for a change of direction in the Premier League.

The Canaries travel to Everton on Saturday bottom of the table after losing their first five games.

The players were booed off the field after a 3-1 home defeat by fellow promoted side Watford, before losing to Liverpool in the Carabao Cup.

"There is always pressure on this level," said Farke.

"Our supporters were not unbelievably happy after the Watford game. They were booing a little bit - and if you judge it in a level way, you would expect this a little bit."

Since arriving at Carrow Road in 2017, Farke has delivered two Championship titles in the past three years, and the 44-year-old says his side "will not change our ways".

"Of course we have credit in the bank, that is also definitely for sure," he added. "It is a different situation to four years ago where no-one knew you.

"Now you have proven you can win trophies and can do good things.

"We know that we will not change our ways, so nothing will happen here.

"We are fully convinced in our way and how we act, that the key persons are the persons in the right place."

Norwich had a difficult start to the campaign with games against Liverpool, Manchester City and Leicester, before losing 1-0 at Arsenal, till then without a point themselves, after the international break.

Farke says the media is also to blame for some of the negativity around the club.

"There is a bit of negativity perhaps from the national media because they do not know really exactly each and everything about where we are coming from or the fixture list," he said.

"They just watch the table, with nil points, and say 'OK, we have to criticise a bit'."

"At the moment we have to be focused a bit more on protecting our own goal, but all in all, we are fully convinced of our way and this is the way we will go forward."

Norwich face sixth-placed Everton at Goodison Park on Saturday, and Farke said: "We wanted to be there with more points, especially against Watford, but that does not mean we raise the white flag.

"We have analysed things in a self-critical way, but we will not lose trust and be panicking."