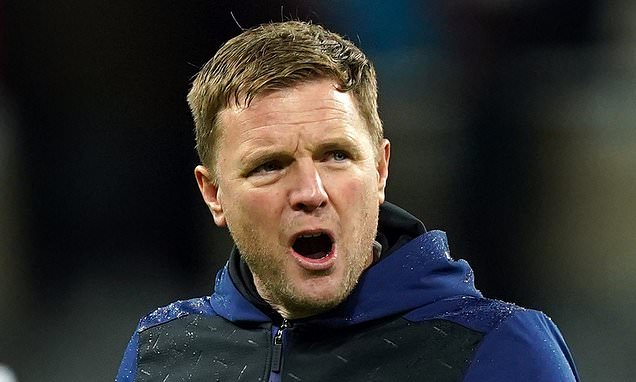 Joe Cole expects Newcastle United will try to buy their way out of trouble with a £300million spending spree in the January transfer window.

The Magpies are rooted to the bottom of the Premier League table and they are the only top-flight team yet to record a victory after 14 games this season.

New boss Eddie Howe saw his side held by fellow-strugglers Norwich on Tuesday but Newcastle remain confident of avoiding the drop to the Championship due to their £305million takeover by Saudi Arabia's Public Investment Fund (PIF) in October.

'They're going to spend £200 million to £300 million in January, they (the owners) have not come in to play games,' Cole said of Newcastle on Amazon Prime Video .


'The richest owners that we've seen and I think in January they'll just throw money at it. I think there'll be four or five players coming in. Once they get one win and get settled then they'll kick on.'

Cole also claimed former Bournemouth boss Howe is a 'fantastic appointment' for the North East club, adding: 'He knows the Premier League, he improves players. I think he's the right man for the job.'

Newcastle's plans for the January transfer window have been hampered by a Premier League ban on related-party sponsorship deals.

The moratorium on clubs signing new commercial contracts, which was introduced last month as a direct result of Newcastle's Saudi takeover, was due to end next Tuesday but will now run until December 14 at the earliest.

Newcastle voted against the sponsorship ban at the emergency meeting which led to its introduction on October 18, while Manchester City abstained on the grounds that the prohibition was anti-competitive and potentially unlawful.

Both clubs are understood to have reluctantly agreed to the extension at a virtual Premier League summit held earlier on Friday, although Newcastle will be concerned that it represents another attempt to limit their spending power as they line up new commercial contracts with companies based in Saudi Arabia.