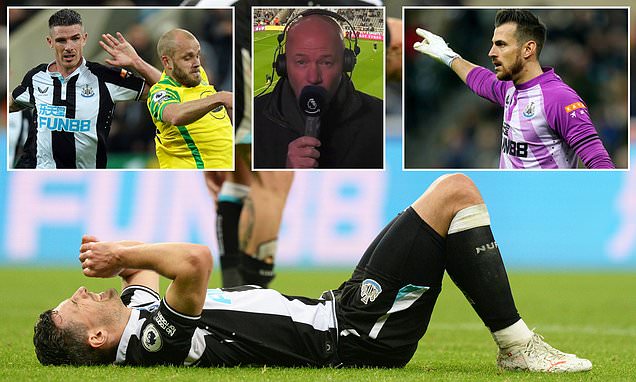 Newcastle made a number of defensive errors in their 1-1 draw with Norwich, as their winless run extended to 14 games.

The biggest mistake came after just nine minutes when Ciaran Clark hauled Teemu Pukki to the ground and was sent off just seconds after his poor clearance set the Norwich striker through on goal.

The Magpies battled hard with ten men for more than 80 minutes to earn themselves a point, but there were enough moments in the match that concerned club legend Shearer.


After the match, Shearer who was on commentary for Amazon Prime, said: 'I'm still scared stiff whenever the ball goes into the final third for Newcastle as it's individual errors.

'I mean I just don't have a clue what they're going to do - I'm not sure they do at times.

'They did defend well and did react to the sending off and stick together as a group. But the individual errors are still there.

'Clark had one, (Fabian) Schar had one that could have cost them. The goalkeeper makes one I think he could have got two hands when the cross comes in. These are basic individual errors that at this level you're going to be punished.'

Callum Wilson struck from the penalty spot to give Newcastle the lead after 61 minutes.

Norwich equalised when Martin Dubravka failed to deal with a Billy Gilmour cross and pushed the ball out to Dimitris Giannoulis. The Norwich substitute then found Pukki who hit a stunning volley into the top corner.

Things could have been worse for Newcastle when Schar was dispossessed by Pierre Lees-Melou who forced Dubravka into a smart save with his legs - making up for his earlier mistake.

Shearer added that he was not sure whether his former side will have enough to avoid relegation this season.

He said: 'I'm not convinced they will have enough. They now look to Saturday's game against Burnley, again, you're going to hear it's a must win game over the next few days.

'Same as tonight. It's been 14 games (winless) and the longer it goes on the harder it becomes.'