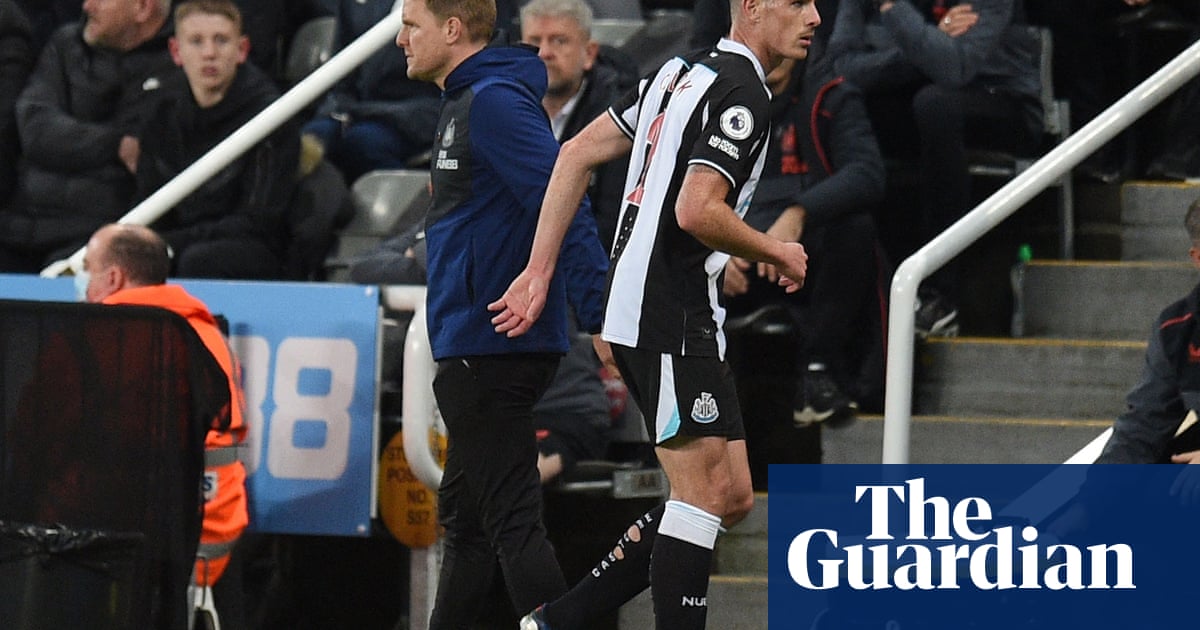 Welcome to Newcastle, Eddie. Twenty‑two days into his one-off survive‑and-build mission, Newcastle’s manager finally got to stand in the home dugout at St James’ Park, and to do so at the start of a run of games that will define the immediate trajectory of this strangest of seasons.

In those moments Eddie Howe looked pumped, fresh-faced and keen-eyed, fizzing with that familiar ferrety energy. Nine minutes into this game he was already clutching his head, whirling around to his dugout, rejigging the plan, and pointing feverishly to the subs’ bench as Ciaran Clark’s red card required the immediate junking of plans, the scaling back of what had looked a progressive and attacking team.

To their credit Newcastle’s players showed heart here to recover from Clark’s sending off, to take the lead after half-time, to remain tightly packed and resilient in the face of Norwich City pressure – albeit this is something of an oxymoron, the football equivalent of being thrashed to within an inch of your life by a damp piece of kitchen towel.

By the end a point from a 1-1 draw might have felt like a moment of anti-climax. But Howe knows the scale of his task here, that he has to find something solid to work with too, a piece of steady ground. Heart, spirit, will. It was here. Will it be enough? Because there will be more, not less of this theatre to come, and a process of contortion, of feverish rebuild on the hoof that really is only just beginning.

Newcastle’s month of living dangerously had been widely trailed before this game. Norwich and Burnley in the space of five days, followed by mission not very possible: Leicester and Liverpool away, Manchester City and Manchester United at home. Fail to win the next one and Newcastle will most likely be travelling to Everton on 30 December without a win yet in the league. Salvation from that point would require a kind of reverse-Keegan, but it certainly isn’t beyond them.

The hand of Howe has already been felt in this Newcastle squad. There is talk of a stirring of the wind, of touch-screen to-do lists at training, of sessions thrashing away at the laptop on the way back from the latest defeat. And why not? Howe is an excellent manager. If Steve Bruce was a worn brown slightly sagging Chesterfield armchair, a little sunken, a little fixed and sagging, Howe has a fierceness about him, a modernising zeal. This is basically who Newcastle should have had in charge all along.

There will, though, be bumps along the way. Clark’s red card came after he fluffed a clearance into Teemu Pukki’s midriff, leaving him haring off diligently towards goal, but still 40 yards out, still with a great deal to do. Pukki is 31 years old. He’s an eager, scurrying figure. Running a bit faster than Teemu Pukki: this is not an unreasonable ambition. Instead Clark grabbed his shirt. Pukki jack-knifed. Clark walked off looking stricken.

And suddenly the game had a different gravity as Newcastle were required to take a breath, to sit and wait as Billy Gilmour began to snap the ball about in the spaces between midfield and defence. Newcastle were solid, disciplined, resilient. Albeit, resilient in the face of Norwich, a team that has scored seven goals this season. They might have made it eight on 28 minutes, but Jamal Lewis produced a fine close-range block at the far post.

The fans sang “Eddie Howe’s black-and-white army.” Nothing much happened.

With 58 minutes gone the ball hit Gilmour’s hand at a corner. The VAR delay was, of course, excruciating, extended, fraught with rumblings, tides of anguished noise, and a gathering wave of hope as Andy Madley strode primly towards his monitor. Callum Wilson buried it, just about. Pukki equalised with a wonderful volley after a spell of slow-burn pressure.

And that was just about that. The avoidance of defeat will come as a huge relief, not least as the oddity of Newcastle’s situation is yet to fully reveal itself. The transfer window has loomed as a kind of cavalry charge splurge of cleansing money and talent. But the right moves here are also unclear. Who comes in? What kind of talent, what kind of personality can be thrown, profitably, at this situation? How to resist the urge to head straight from the lottery office to the helicopter showroom.

And really, there is no precedent for this situation, no previous case where a club fighting relegation have signed, say, Ousmane Dembélé, the eighth most expensive player in football history.

Here we have a group of players who have been told, and told often, that they are simply not good enough, that they are the living, breathing symptoms of systemic neglect. Except, that group of unwanteds is also charged with keeping the club in the league – so that they can be replaced by better players. Cheers lads. Leave it nice eh? And slip out the back door when you’re done.

A point against Norwich is hardly a jumpstart. But Howe would be best served building on what he saw here. Defiance, closed ranks, a little will and shared heat: it is at least a start.