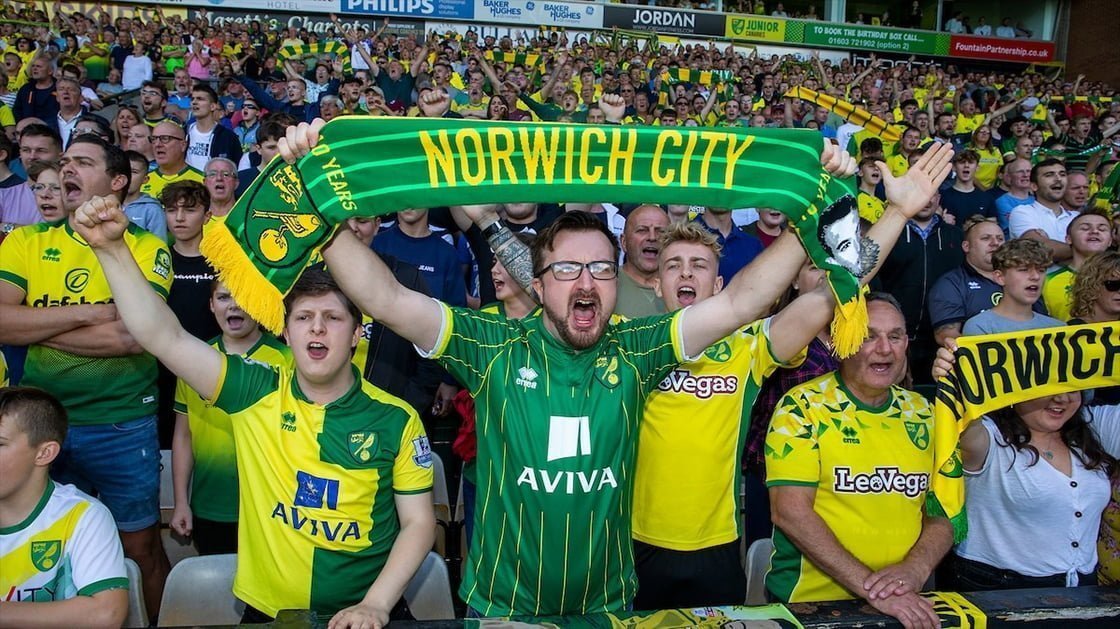 It is over 30 years since Norwich fans last saw their team win on Tyneside.

This Tuesday night match sees 20th meeting 19th, relegation once again a threat for NUFC and the visitors this season.

Norwich fans have been heartened by Daniel Farke winning his final game and then Dean Smith picking up a win over Southampton and a goalless draw against Wolves at the weekend.

The two worst defences meet, Newcastle conceding 29 to the 27 Norwich have leaked.

Whilst actually only 11 Premier League clubs have scored more than the 15 Newcastle have managed. Norwich scoring by far the least with only seven goals so far, having started the season failing to score in seven of their nine PL matches.

Norwich fans seeing a recent improvement with four goals in their last four games, compared to three in the previous nine.

Are Norwich finding their feet or is it just a temporary blip that Newcastle can sweep aside?

A game billed ‘must win’ for Newcastle United and difficult to see it as anything but that.

What are Norwich fans having to say ahead of the action…

Norwich fans commenting via their The Pink Un message board:

‘Offer me a draw here and I’ll rip your hand off. Obviously, hoping for a win but another points gain will help create momentum. A draw would also keep them behind us too.

There’s quite a lot of firepower in that Newcastle side if they get it going with Wilson and particularly Saint-Maximin, and there’s no way Howe will set his team up to be as defensive as they were against Arsenal with 50,000 hyped up Geordie fans able to see him for the first time (he missed the first home game with Brentford due to Covid). So, they will in all likelihood start out fast and this will be a test of our newly discovered defensive resolve.

‘Well I wanted four points from the Wolves and Saudi games so I suppose I’d better say a 2-1 Norwich win.

But like a few others on this thread I have a bad feeling about tomorrow and suspect it’ll be the other way round.’

‘Newcastle look like they can’t defend, but have great talent in attacking areas. They’ll be up for it, the home-crowd will make a difference.’

‘Wow that’s impressive on a Tuesday in Newcastle.’

‘Well done to those going to up to Newcastle. Up being the operative word including when you get there for that preposterous birds eye view.’

‘As a Norwich City fan of many years my gut says that Norwich will give Newcastle their first win of the season, it is the Norwich way so for that reason only I am going Newcastle 2 Norwich 1.’

‘Keep them quiet for twenty minutes, get the natives nervy then pick them off. 3.1 Norwich.’

‘Normally I would say along came Norwich

‘Very impressed with the last 3 games at the fighting spirit shown. Saints and Wolves were both in decent runs of form and I was worried that we would lose both. We are improving and markedly, sooo……

‘Howe had the barricades up against Arsenal, and still looked fairly ordinary at the back. No chance he sets up as defensively in a winnable game in front of an expectant SJP, also without two important defensive characters.

If we show the same development that we have thus far under DS there’s no reason to think we can’t get 3 points. Draw would be OK, most important thing is not to lose and give a rival a major boost.’

‘2-1 City. I’m pretty convinced we’ll win. Yes we’re both under a lot of pressure at the moment, but the Magpies are still yet to win and without a clean sheet this season and it looks like we may have changed into a completely different team since Smith’s arrival when you look at our performances against the Saints and Wolves.’

‘This has to be a must win for Toon if they are to start to claw their way back. So they just have to come at us fast and furious – and leave themselves open to the counter sucker punch.

It will be a test of Deano’s tactics – weather the storm and then sink them.

2:0 to us and disquiet on the terraces.’

‘3-0 win. Just got a feeling, if we press them high enough and restrict service to Saint-Maximin we will create chances because they can’t defend, the crowd will turn and then it will just be a case of pressing them back, winning our duels and out working them which we’ve shown we can do in the last two games.’

‘Aside from Saint-Maximin they are awful and are easier to score against than we were under Farke. Their crowd will be itching to get on their backs and I don’t rate Howe’s chances of improving them defensively.’

‘They’re gonna go into this game thinking that this could be their turning point.

‘They will play open attacking football so we have to take advantage of it. Think there’s gonna be a few goals, I just hope we break the St James Park hoodoo and get 3 points.’

‘Who will newcastle ever beat?

Could they fail to get 11 points?

To quote kk I would love it if they get relegated.

All these questions cross my mind.

Because I know and so do you norwich have the better team.’

‘No doubt Newcastle are going to feel this is their best opportunity for a: a clean sheet, b: a win. Just like we did when Watford rolled in. I might live to regret saying this, but I don’t rate Wilson at all – Jimenez is a better player and we handled him just fine, Saint-Maximin is their only real threat – shame Normann won’t be marshalling him.

We’ll get an early goal on the break and they will panic, crowd will turn.’

‘Only time I went we lost 4:3. Great Day with cruel ending.’

‘Think there’s a bit of underestimating of Newcastle going on. They’re not special but they have a couple of proven attacking players – Howe will have had a little more time with them and will play more his natural preference on the front foot.

Saying that. they’re bottom for a reason and a point would be good.’

‘Huge test. Newcastle will be right up for this. If we can hold off the initial onslaught then we have a big chance. The locals will turn on their own team and it’ll be a very uncomfortable place to be for the Newcastle players. The fans will be expecting an easy win here against us. I’d take a draw all day long. We’ve got a chance to get 3 points too but it’s gonna be really tough.’

‘Far too much positivity on here. Yes, we’ve made some progress in the last couple of games but nothing like enough to believe that we can go to Newcastle in these circumstances and win. I will be astonished and delighted if we come away with anything.

Given we have not scored a goal in 8 of our 13 games and in 5 of our 6 games away, forecasting us to score 3 is somewhat optimistic. When you add in that we have kept 1 clean sheet away from home, we are very unlikely to be able to stop them scoring.

I’m afraid I can’t see anything but a defeat. Hopefully not too heavy. I think we have a much better chance of getting something at Spurs.’