'Gary Speed - Ten years on I can still remember exactly where I was when I heard...'
The Mag 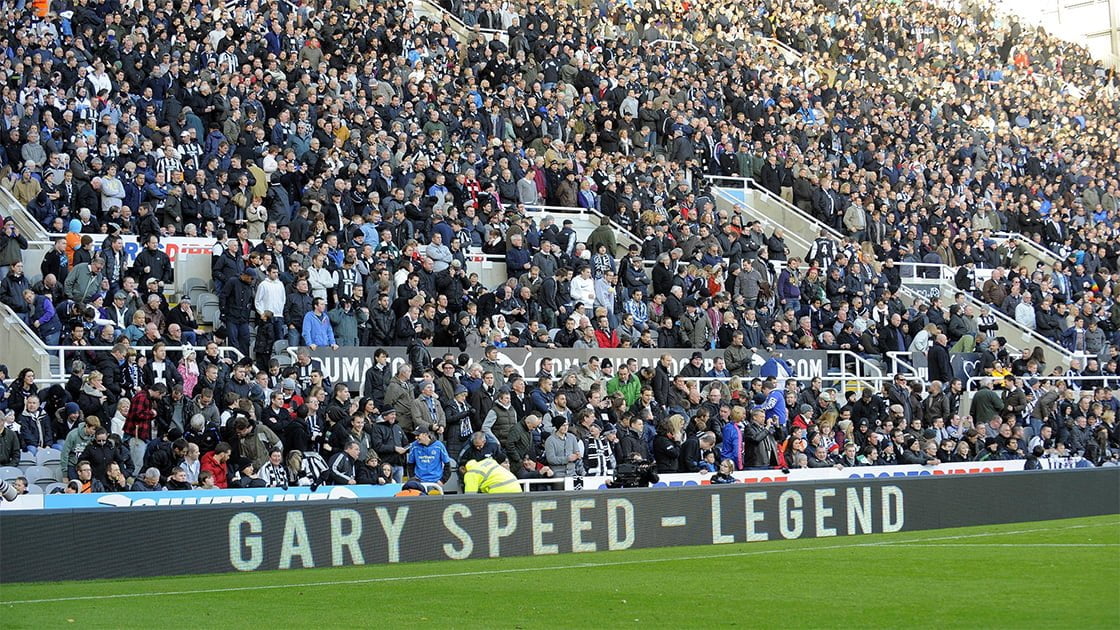 “I could stand here and talk another ten minutes about Gary Speed.

“He’ll be missed on the planes, on the busses. In every concept of that boy coming in to play football for Newcastle, and departing, he will be missed.” Sir Bobby Robson on Gary Speed.

On 12 November 2011, Gary Speed’s Wales side completed an emphatic 4-1 win over Norway. One goal apiece from Gareth Bale and Craig Bellamy and a late brace from Sam Vokes capped a remarkable first year in charge of the national side for Speed, which had seen him lead his side from 117th in the FIFA World Rankings to 45th.

The previous 12 months had seen Speed blood a number of young players, and the policy had paid off. For the first time in years there was real optimism about the future of the national team. Gary Speed had been the driver behind that and a bright future seemingly beckoned for Speed and his team.

However, just over two weeks later Speed was gone. A short statement released by the Wales FA on a cold Sunday morning confirming the passing of Speed. He was 42 years old.

Ten years on I can still remember exactly where I was when I heard about his passing. I was at the Christmas markets in Birmingham when a text message came through from my Dad saying that there were news reports that Speed had died.

Times were very different back then. Even though it was just a decade ago the conversation around mental health was virtually non-existent. Particularly within football and sport in general. It didn’t even cross my mind that Speed might have taken his own life.

My first thought was that he must have had an underlying health condition. There have been numerous examples of professional athletes struck down in their prime and I assumed that was what had happened to Speed.

Here was a man who seemingly had everything to live for. A wife and two children. A brilliant football career behind him. A bright future as a manager of his country ahead of him.

And yet he still that he felt the only option was to take his own life, leaving a wave of devastation behind him.

Ten years on and Speed’s loss is still keenly felt in the football world and rarely a week goes by when I don’t think about him.

As a young Newcastle United fan when he joined the club I idolised Speed. He was everything a midfielder should be. Strong in the tackle, a great eye for a pass, brilliant in the air and with a keen eye for goal. He was the definition of a box to box midfielder.

He might not have been Captain of the club but he was a real leader. He had incredibly high standards on and off the pitch. He had enormous presence and charisma and was a key figure in every dressing room of every club he played for.

Speed had begun his career at Leeds United, where he would go on to establish himself as one of the best midfielders in the game, playing 312 times and scoring 57 goals, and was a key part of Howard Wilkinson’s side that would win English football’s top tier in 1992.

He would then spend a season and a half at Everton, scoring 18 goals in 65 games, before Kenny Dalglish secured his signature for Newcastle United in February 1998.

Speed would provide six and a half years of sterling service at St James Park. He would play in two FA Cup finals and was a key part of Sir Bobby Robson’s side that enjoyed some wonderful European adventures.

After leaving, he would spend three and a half seasons at Bolton Wanderers before finishing his playing days at Sheffield United.

After calling time on his distinguished playing career he was a natural fit for management and was soon appointed Sheffield United manager. However, he would remain in post for only four months before the lure of managing his country proved too much and he was appointed Wales boss in December 2010.

It was a role he would fill with great distinction and bravery, including making a young Aaron Ramsay captain. Wales improved immeasurably under his quiet leadership and the high standards that had been developed throughout his career as a player.

Tragically, Speed’s life was to be cut far too short, and all the promise and achievements of his future were cruelly snatched away by his silent battle with mental illness.

Having watched and read so much of the coverage over the last few days, what becomes clear is how much he clearly struggled alone. A man who was there for so many others throughout his career, clearly felt for whatever reason that he couldn’t share the battle he was facing with even those closest to him.

In a poignant tribute on BBC Sport, former Football Focus presenter Dan Walker looked back at the day he spent with Speed before he died.

“I remember the day really vividly. I do go over it in my mind quite a bit. I just couldn’t fathom what had happened when you think about the day I’d had with him the day before.

“Then you just go back over absolutely everything and you can’t help asking yourself whether you could have done something.

Walker’s disbelief was shared by those closest to Speed, none more so than his wife Louise, who admitted that she still finds it hard to forgive him for leaving her and their two sons.

While Speed obviously felt unable to reach out for help when he needed it the most, the attitude to mental health has shifted hugely in the decade since he passed, but it is still clearly a major problem with suicide the biggest killer of men under 45 in the UK.

“All I know is his two boys and those that knew him best felt that something happened that day that Gary felt for whatever reason there was no other way out and that’s incredibly sad and distressing, particularly for his family because his two boys absolutely adored him and he loved them.

“Nobody would have wished for them to have been through what they’ve been through, but I think both of them would say that they know now very clearly that if they were ever struggling, if they felt they couldn’t cope, they’d talk to someone.

“I think if Gary had spoken to someone that night he’d still be here. I think that’s the hard thing.”

Like so many others who have expressed similar sentiments, I do still find it incredibly hard to fathom that Gary Speed is no longer with us.

What is of comfort to me and many others is the legacy he left behind. It is incredibly rare for someone who has been gone so long to still be so present in so many people’s thoughts. He made an impact on thousands of people whether he knew it or not and was an inspiration to many. To be so universally liked and fondly remembered is a mark of the man he was.

So how to sum up Speed as a man? It’s almost impossible to do. But I think former Swansea City and Wales left back Neil Taylor paid a lovely tribute in a piece on BBC Sport this week.

“He was somebody who, when he walked into the room, had a bit of an aura about him and you wanted to listen to him.

“That charismatic character that managers need, I think. He looked after himself, one of those very good-looking guys. You’re sort of envious!

“I just remember him as being that guy who had that fantastic posture, upright, stood tall, had his head, his chin up, shoulders back all the time, encouragement, attention to detail.

“No excuses, wanted everything to be perfect. Demanding but, at the same time, fair.

“And I think you could tell he was a loving father as well. He loved his kids. And I just remember him as somebody we’d all want to be.

“I think that’s the most fitting thing we could say really, is we’d all love to have been Gary Speed.”