Rafa, Gerrard, Rodgers & 9 games in 28 days in December
This Is Anfield 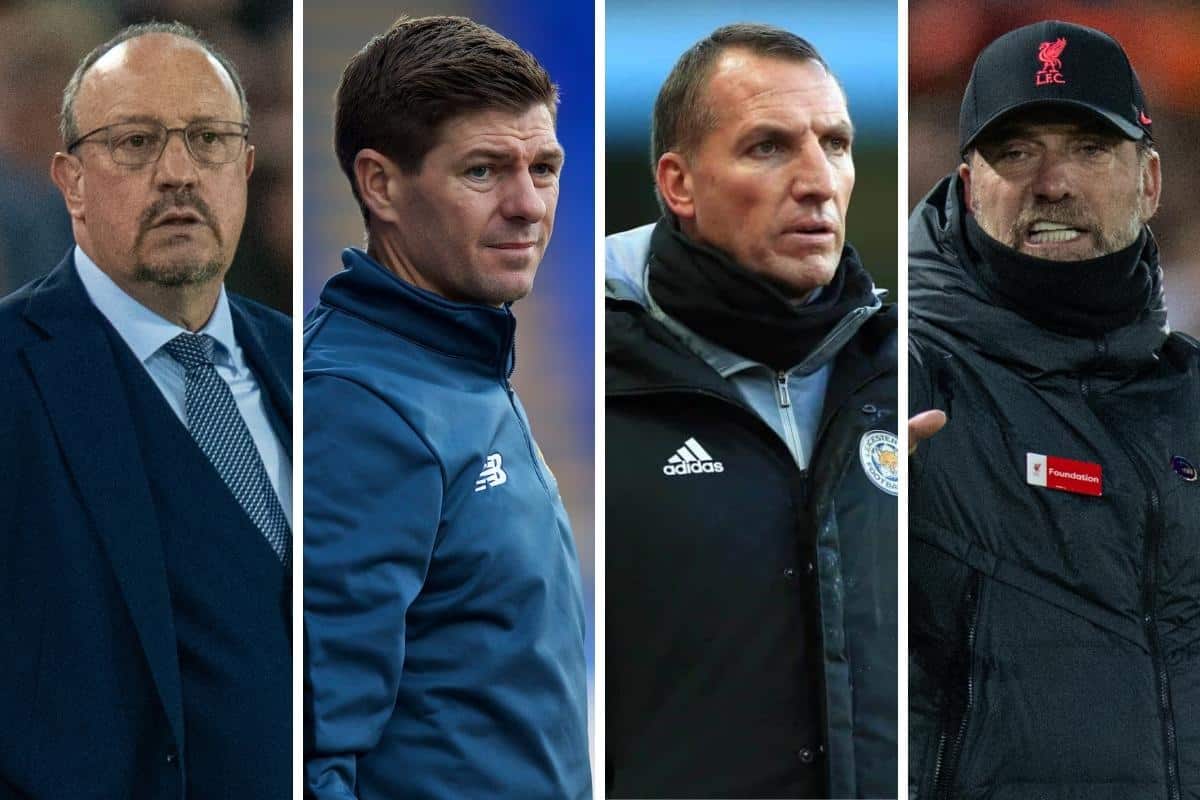 Liverpool head into another busy December with three high-profile reunions to look forward to, along with a trip to the San Siro and a Champions League knockout draw.

The Reds finished November with a resounding victory over Southampton that, following Chelsea‘s 1-1 draw with Man United, pushed them to within a point of the Premier League summit.

Jurgen Klopp has managed his squad well throughout the campaign so far, particularly given the hangover from last season’s centre-back crisis and the ongoing injuries throughout midfield.

But December will be an even bigger challenge, with nine first-team games to come before the end of the year – all in the space of 28 days.

Here are Liverpool‘s key dates for the diary in November, including fixtures for the under-23s, under-19s, under-18s and women’s sides.

What a way to start the month!

Liverpool head to Goodison Park for a strange reunion with Rafa Benitez, who finds himself under increasing pressure in his role as Everton manager.

Everton are without a win in seven, losing five of those, sitting 14th in the Premier League, and it is not out of the realms of possibility that a Liverpool win could get Rafa the sack.

The second of three consecutive away games, Liverpool head to Molineux three days after the derby and Klopp will no doubt have rotation in mind.

Wolves have improved of late, with five wins in their last eight and only one defeat in that run, with a return to form for Raul Jimenez – who has scored three and assisted two in his last seven starts – key to that.

Liverpool have won all three of their Premier League trips to Molineux under Klopp, and have won their last five home and away.

The draw for the third round of the FA Cup is set for the evening of December 6, taking place prior to the second-round clash between Boreham Wood and St Albans City on ITV4.

Liverpool have faced Premier League opposition in the FA Cup third round in each of the past four seasons, including two clashes with Everton.

Liverpool will conclude their successful Champions League group stage with a trip to the San Siro, already having booked their place in the last 16 as winners of Group B.

Though this tie will be a dead-rubber, Klopp is still likely to field a strong side in Milan, with their opponents in with a chance of sneaking into the knockout stages ahead of Porto and Atletico Madrid with a win.

If Liverpool take the three points, they will become the first-ever English side to win all six group games in the Champions League.

After a meeting with Rafa to start the month, the Reds will then welcome Steven Gerrard back to Anfield for his first-ever game against Liverpool.

Gerrard has made an impressive start to life with Villa, with a 2-0 win over Brighton and a 2-1 victory over Crystal Palace, but faces home clashes with Man City and Leicester between now and then.

It will be a surreal day on Merseyside, but there will be no concessions for the legendary midfielder.

Regardless of the result against Milan, Liverpool will enter the draw for the Champions League last 16 as one of eight seeded sides.

That means they will avoid Ajax and Bayern Munich in the next round, but Paris Saint-Germain and Sporting CP are both possible opponents having guaranteed second place in their groups.

The draw will begin after 11am on December 13.

Liverpool stay at Anfield for their next game, with more narrative in the buildup as Eddie Howe faces his first title contender since taking the tainted money at St James’ Park.

Newcastle have drawn one and lost one since he took over, though the 3-3 draw with Brentford came with Howe absent due to a COVID-19 diagnosis.

The 44-year-old has only won one of his 10 meetings with Klopp, losing each of his last six, while Newcastle have not won at Anfield since 1995.

Then it’s a clash of the heavyweight managers as Klopp takes on Antonio Conte for the first time since 2018, with their record evens after four meetings so far – a win each and two draws.

Conte has had a mixed start with Spurs, with victories over Vitesse and Leeds, a draw with Everton and, remarkably, a defeat to Slovenian side NS Mura in the Europa Conference League.

But things may have improved since then, and it could be a tough trip to north London for Liverpool.

The focus shifts in the last game before Christmas, with Brendan Rodgers’ Leicester visitors in the quarter-finals of the League Cup, bringing the third managerial meeting with a former Liverpool player or coach in December.

If a mixed Liverpool side makes it through to the next stage, the draw for the semi-finals is likely to take place shortly after full-time.

The two sides have already met this season, that being a comfortable 3-0 win at Elland Road, a day soured by Harvey Elliott‘s serious ankle injury.

The last of nine games in December is a reverse fixture against Leicester, this time in the Premier League, with a much different lineup likely at the King Power.

Leicester have been distinctly average this season, but there have been signs that they are capable of going on winning runs, which Klopp and his side will be wary of.