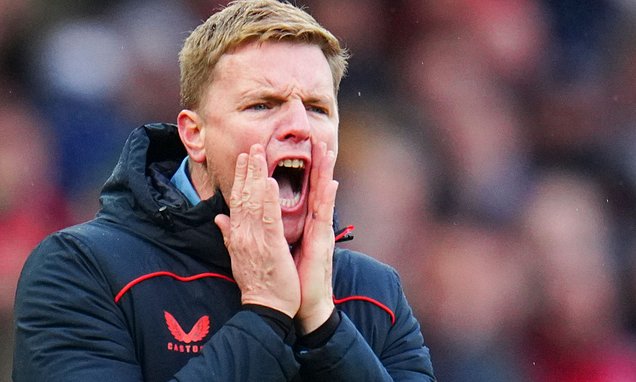 Newcastle boss Eddie Howe will not make promises over January investment but says the team’s position at the bottom of the Premier League will be the only obstacle in attracting players.

Many are expecting the club’s Saudi-backed owners to invest heavily in the New Year in a bid to save their season, with the Magpies winless after 13 games and six points from safety.

But Howe has not yet had a conversation with the hierarchy about transfer budgets and does not want such talk to distract from this week’s home matches against relegation rivals Norwich and Burnley.

‘It’s very difficult to make any promises on (January spending), in the sense we will definitely spend money and sign players,’ he said.


‘You have to attract the players, they have to want to come and they have to be the right players to improve the squad. That is why January is an incredibly difficult window to recruit players in, especially when your league position is difficult.

‘I can't make any promises on that, but I can promise that the people above me, the owners, will support the team and support me in trying to achieve what we need. That’s all I can say at this time.

‘It would be foolish of me to make rash promises or statements. My priority at the moment is to get the best out of the players we have.’

Howe also responded to claims from former Aston Villa striker Gabby Agbonlahor that targets will not want to live in Newcastle.

‘I don’t think that’s accurate,’ he said. ‘I haven’t seen Newcastle in the light, yet, so it’s difficult for me to comment too much, but I’ve heard from everyone that I've spoken to how nice the area is to live in.

‘I’ve heard amazing things about the town centre and the surrounding areas, and I can’t wait to experience that myself.

‘We’ll have no problem attracting players to Newcastle for a whole host of reasons. I don’t think that’s going to be an issue.

‘What is an issue is our league position in attracting players in January, but that’s not my focus at the moment. My focus is on preparing the team for a massive week ahead.’

Newcastle are currently without a chief executive after Lee Charnley’s departure and Sportsmail understands replacing him will take priority over the appointment of a director of football.

Former Chelsea supremo Michael Emenalo is among the contenders for the latter, although current chief scout Steve Nickson is set to handle January business.

Howe said: ‘I think to get the structure we want in place, it (director of football) will be important for the long-term benefit of the club, for sure.

‘It's something I know that the club is looking at and when they believe they've identified the right people, that will happen.