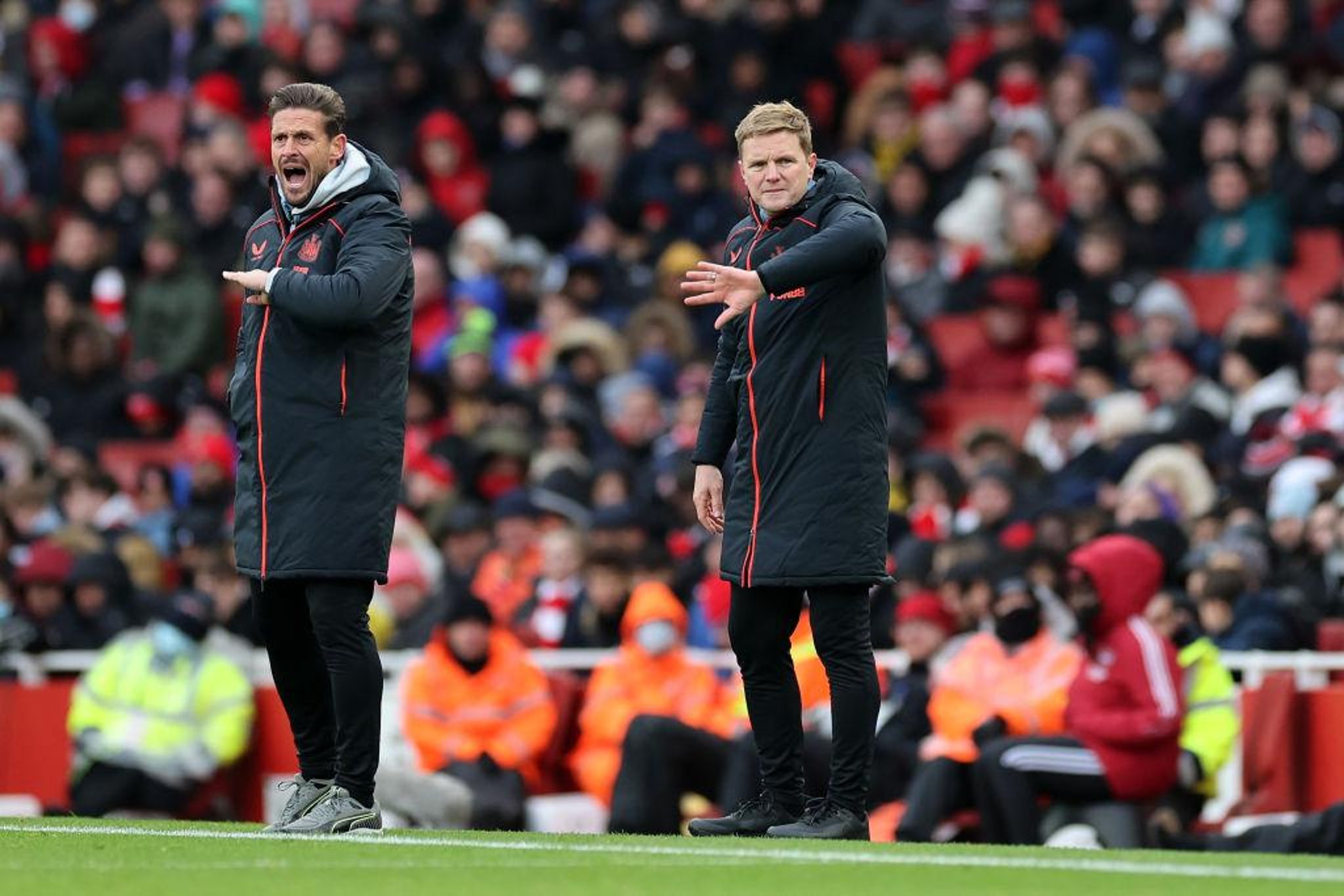 For the first time as Newcastle head coach, Howe was on the touchline at The Emirates, however, he could not prevent his side slipping to a seventh league defeat of the season.

A disappointing day in north London means Newcastle stay bottom of the table ahead of crucial fixtures against Norwich City and Burnley.

Here are seven things we picked up on during Newcastle United’s defeat to Arsenal.

Let’s start with one of the biggest positives from the game. Martin Dubravka returned to the side and put in a calm but imposing display to marshall the defence in front of him.

He could do nothing about either Arsenal goal with superb finishes from Bukayo Saka and Gabriel Martinelli giving him absolutely no chance.

Despite having relatively few efforts to save, it was Dubravka’s presence behind Jamaal Lascelles and Fabian Schar that seemed to calm the pair.

One moment which typifies this is when Dubravka came and claimed Arsenal's first corner with ease. It wasn’t anything flashy, however, it was done with composure and a calmness which reminded everyone just how much Newcastle have missed his presence in goal, hopefully there is plenty more to come from the Slovakian this season.

Newcastle, to their credit, did start the game promisingly and worked themselves a few openings with Joelinton in particular bullying the Arsenal back line.

The trio of Callum Wilson, Joelinton and Allan Saint-Maximin worked well last week, however, they were unable to replicate this for large parts at The Emirates.

Wilson in particular was fairly subdued without and his battle with Gabriel was one of the reasons for this.

The striker often found himself alongside the Brazilian with the defender seemingly struggling to cope with the pace and power of the striker.

On a few occasions, Wilson seemed to get the better of his marker, only for referee Stuart Atwell to either penalise the striker, or fail to give him a free-kick when he had his shirt pulled.

This would be compounded in the second-half when Newcastle were denied a penalty for a foul on their no.9.

Credit must go to Gabriel for coping with United’s talisman and Wilson will be hoping he can get himself back in and amongst the goals against Norwich City on Tuesday.

A consequence of the Wilson v Gabriel battle was that he often found himself isolated up-front.

Whilst this was something he had become accustomed to at Newcastle, it was disappointing to see his supporting cast revert to firing long-balls into him without any support when he had it under control.

Last time out against Brentford, Joelinton and Saint-Maximin were consistently offering options in and around Wilson, however, their defensive set-up this game meant that didn’t happen all too often.

If they are to get results in their huge upcoming games against Norwich City and Burnley, then Howe must find a way of ensuring his main man isn’t isolated up front once again.

One thing you can definitely say about Arsenal v Newcastle United yesterday is that it was far less chaotic than the game at St James’s Park last week.

Especially in the first-half, Newcastle found a way of keeping their opponents at arms length and Arsenal struggled to break down their defence.

This continued into the second-half, however, two lapses in concentration and poor defending meant Arsenal punished them and they were unable to raise the tempo and push for a way back into the game.

It was certainly less chaotic than last week and Howe will likely find the positives in that, however, the result of this meant Newcastle failed to test the Arsenal defence regularly and rarely looked like scoring.

When the teams were announced, many believed Newcastle would set up in a 3-4-3 formation with Ryan Fraser and Matt Ritchie acting as wing-backs.

In fact, United set up in a 4-3-3 formation with Emil Krafth and Ritchie as full-backs with Fraser operating further forward.

Unfortunately for Howe, this tactical switch didn’t get Newcastle their maiden victory of the season. Furthermore, it could be argued that both full-backs were at fault for Arsenal’s goals.

Saka managed to evade Krafth for the first one whilst the ball to Martinelli for the second was not cut out by Ritchie, allowing him to score a wonderful goal.

For a large part, the game at The Emirates seemed to pass Saint-Maximin by with the Frenchman unable to assert his influence on proceedings.

Saint-Maximin was rarely able to run at the defence and create chances for Wilson - a far-cry from his performance last week.

Moreover, Saint-Maximin also found himself being dispossessed a few times by the Arsenal press, allowing the opponents to recover the ball in promising areas to attack.

One moment, near the end of the first-half, saw Saint-Maximin lose the ball just 30 yards out after trying to wriggle free of the opposition and whilst Arsenal were unable to punish this mistake, it highlighted just how dangerous losing the ball in that position could be.

Hopefully on Tuesday, Saint-Maximin will be back to his very best and that this performance was merely a blip.

Yellow cards picked up by Lascelles and Ritchie mean that neither of them will play a part in the clash with Norwich at St James’s Park on Tuesday.

Both picked up their fifth booking of the season, resulting in a one game suspension.

Lascelles and Ritchie both bring huge influence and leadership to this side so the pair will be a big miss, however, one positive could be that Jamal Lewis may get to see some first-team action again this season - against the side he left last summer.