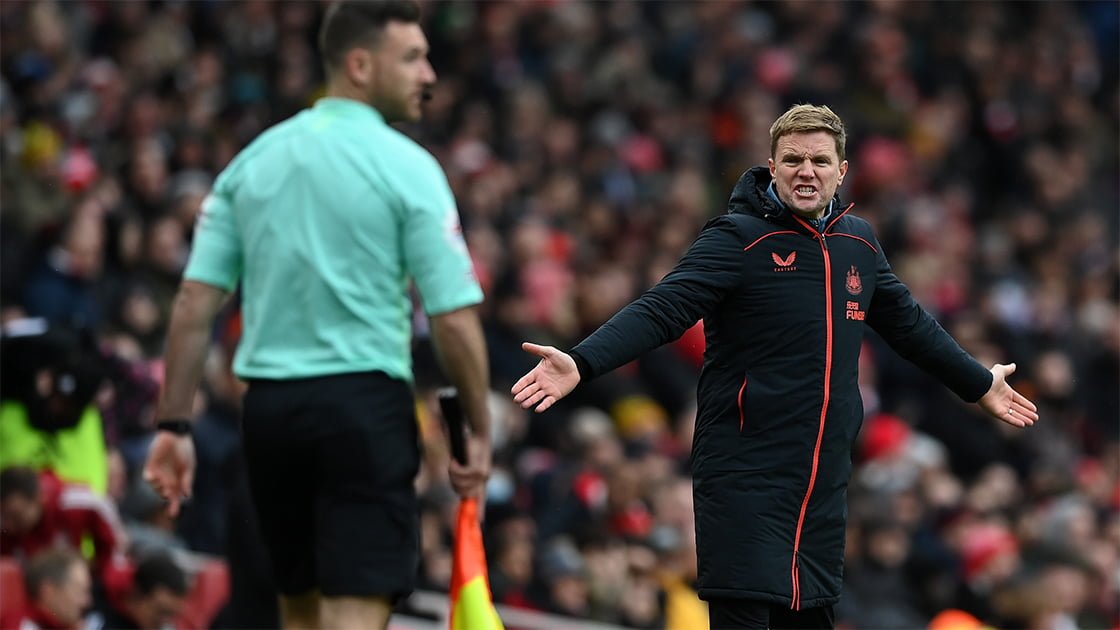 Eddie Howe has been talking about his first Newcastle United match in charge, in person.

The new NUFC Head Coach having had to miss the draw against Brentford following a positive covid test, whilst a negative test result on Friday allowed him to be on the touchline at Arsenal.

A far more defensive set up at the Emirates compared to the 3-3 draw with Brentford, though for the opening half it almost worked to perfection.

Only 21% of possession that first 45 minutes but Newcastle having as many shots (two) on target as Arsenal and more corners (2 v 1). From one of those corners Fabian Schar was dragged to the floor as the ball came in and how on earth a penalty wasn’t given during a VAR check, is a complete mystery. We all know what the outcome would have been if this had happened at the other end of the pitch…

Shelvey almost gave Newcastle a half-time lead anyway, his effort from outside the box seeing Ramsdale just doing enough to deflect the ball onto the crossbar and it went over for a corner.

There had also been an earlier call for a penalty when an Arsenal player handled inside the box with his arm outstretched as he slid into a challenge, that also waved away. However, Eddie Howe pointed to a third penalty appeal as the key moment of the match. A long ball from Shelvey released Callum Wilson and his pace took him inside the box before an Arsenal defender made contact and the Newcastle striker went down, when just having the keeper to beat, Eddie Howe declaring: ‘The game was decided in the incident with Callum Wilson and the [no] penalty’, as this also was not deemed a penalty by either the referee on the pitch nor VAR official. Arsenal seconds later going up the other end and scoring the killer second, rather than Newcastle with a penalty opportunity to draw level with 24 minutes left.

Eddie Howe defiant though, not seeing this as a foregone conclusion that Newcastle can’t get out of trouble, with both Norwich and Burnley at home in the next week: ‘We now just have to look at the next one [against Norwich on Tuesday], momentum in football is so important and we need to get that first win as quickly as we can…We can only do our talking on the pitch and try and fight back.’

A really really massive night on Tuesday, Norwich have to be defeated.

“I thought that it was a good performance [by Newcastle], especially the start.

“We were good for the first half an hour, though we came under pressure.

“The game was decided in the incident with Callum Wilson and the [no] penalty [both referee on the pitch and VAR official not giving it], which was a tough call against us, then they scored in the aftermath. I don’t know why Callum would go down as he was one on one, a great chance.

“Games swing on those moments and it feels like those big calls have gone against us.

“It was a great save by Aaron Ramsdale to deny Jonjo Shelvey, I thought it was in…

“The pleasing thing today is how we started and finished the game as we created chances, Ramsdale played well but we weren’t clinical, though at least we were creating chances.

“We now just have to look at the next one [against Norwich on Tuesday], momentum in football is so important and we need to get that first win as quickly as we can.

“They [the Newcastle players] are lacking in confidence at the moment naturally, through not winning a game this season.

“We will naturally attract criticism and we have to take that.

“We have to have broad shoulders and I thought we were very good in the last third of the game.

“We can only do our talking on the pitch and try and fight back.”