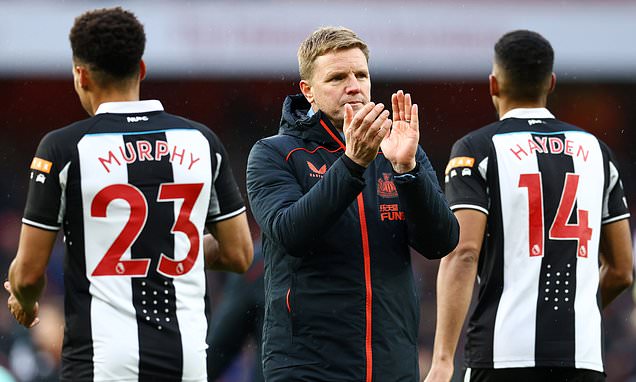 Eddie Howe hit back at accusations his Newcastle United are doomed for relegation.

Howe took to the dugout for the first time since being appointed by Newcastle’s new Saudi owners but could not get that crucial first win of the season.

Arsenal fans taunted manager Howe with chants of, ‘You’re rich but you’re still s***!’ And an irritated Howe responded: ‘I don’t agree with that. I’ve seen the dressing room and we’ve got some very good players here.

‘We’re lacking in confidence, naturally, through not winning a game this season. We must stay committed as we were today. I thought the attitude of the players, even when we were trailing 2-0, meant we were very good in the last period. We can only do our talking on the pitch and try and fight back.’


Newcastle’s next test is Tuesday’s visit of Norwich City.

Howe added: ‘It’s difficult enough when scrapping for points and if it becomes a big deficit it becomes very difficult. Everyone connected with the club wants to get that first win as quickly as possible.

‘We have to look at our next game as an important game. They all are. We have to give everything in the game to try and win it.’

Howe believes his experience of keeping Bournemouth up in his time in charge there will translate to success with Newcastle but he blamed referee Stuart Attwell for missing a penalty decision when trailing 1-0 as Callum Wilson went down from a Nuno Tavares challenge.

He said: ‘The key moment was Wilson going through one-on-one and the penalty was not given. My gut feeling, without seeking controversy, was that the 50-50 calls tended to go against us.

‘We were the away team against a top club and sometimes that happens. The penalty is the one we are most aggrieved with. Those moments decide games and it has gone against us.’

Arsenal manager Mikel Arteta, meanwhile, expressed his delight with the way his side bounced back from last weekend’s humiliating 4-0 defeat at Liverpool to win with wonder goals from Bukayo Saka and substitute Gabriel Martinelli.

Brazil forward Martinelli’s effort, with his first touch, was one for the ages after a prolonged spell out of the first team reckoning.

Arteta said: ‘I’m especially happy for him because of how he behaves. Some players are respectful when you make some decisions and he is patient, but at the same time he is really pushing and challenging and he makes every decision that you make even harder because he deserves more.

‘I’m really pleased because he really helped the team get the points today.’