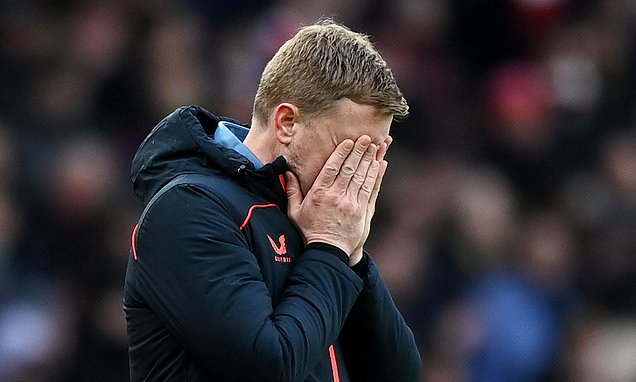 Newcastle manager Eddie Howe has admitted they have a 'big task ahead' following their 2-0 defeat to Arsenal.

Howe was in the dugout for the first time since he replaced Steve Bruce as manager, as goals from Bukayo Saka and substitute Gabriel Martinelli sank the Magpies.

The result leaves them bottom of the Premier League table and still looking for their first win after 13 games.

Howe though said he saw positive signs from his side's performance despite the defeat.


He told BT Sport: 'I saw a committed team, the players gave everything.

'I don't think we were at our best on the ball today, there were a lot of counter attacking opportunities for us to deliver better, especially with the players we have in the team.

'The end of the game we saw the team trying to get back into it and all those characteristics we're going to need.

'There's always a lot of work regardless of the result today, it's a big task ahead of us, slightly bigger after today but I saw positive signs.'

The next two games could be huge for Newcastle, with home clashes against Norwich and Burnley who are directly above them in the league.

Howe though insists that 'every game is a potential turning point' and they can't 'target specific games'.

The former Bournemouth manager felt as though his side should have had a penalty before Martinelli made it 2-0 for Arsenal.

Callum Wilson looked to be through on goal and went down following a shoulder barge by Arsenal full-back Nuno Tavares.

He said: 'To me it looked like a penalty but you need to see it again and need to see why it wasn't given.

'Callum looks like he's through one on one but it wasn't and we need to defend better, that second goal was the killer blow at that stage of the game.'

Depending on other results this weekend, Newcastle could find themselves eight points away from safety.

BT pundit Joe Cole said the next four to six weeks will be vital for Newcastle before they can spend in January following their Saudi-led takeover.

When asked about their upcoming games with Norwich and Burnley he said: 'It seems ridiculous to call them six pointers before Christmas but it really is for Newcastle.

'I feel like they got the big excitement of the takeover, hangover from Mike Ashley era, Eddie's got a big job to settle the whole place. He's got this side for the next four to six weeks before he can bring new faces in the door.

'There's enough ability there to win games in the Premier League. They need to win two or three games before January transfer window.'