‘This is a message’: Some Arsenal fans laud Edu signing after ‘masterclass’ vs. Newcastle

‘Bring him home’: Some Newcastle fans can’t believe what ex-star did yesterday for club

‘No excuse for that’: Ian Wright stunned by what Arsenal star did v Newcastle

Eddie Howe believes Newcastle should have had a penalty against Arsenal

What Should the Toon Army Expect After the Saudi-Led Takeover?
NUFCBlog.org 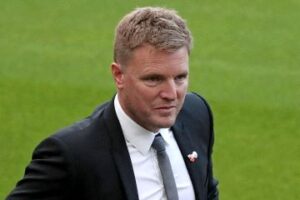 Mike Ashley is out and Newcastle fans can start to dream again. It’s been a long time coming and tastes very sweet for thousands of the Toon Army. However, though expectations are higher than ever due to the amount of money the new owners have, success doesn’t happen overnight.

On the flip side, it’s hard not to imagine Newcastle going on the same journey as Chelsea or Man City. With hope springing eternal on the Tyne, it’s essential to keep our projections as realistic as possible. But what is realistic?

First and foremost, Newcastle needs to stay in the Premier League if the Saudi-led takeover is going to have a positive impact on the club. Trying to gain promotion from the Championship next season isn’t ideal. With Eddie Howe’s men quoted at 800/1 to win the league, it shows that our fate may come down to the final fixture.

We only have six points after 12 games, the worst record in the division and on track for only 19-20 points over the season if the form continues. Therefore, the scale of the task shouldn’t be ignored. If Newcastle United FC is going to make significant strides in 2022, the squad must gel into a cohesive unit.

The good news is that the club has a few quality players to rely on, such as Allan Saint-Maximin and Callum Wilson and the Magpies will play two of their main relegation rivals before the first Monday in December. Hopefully, Wilson and Saint-Maximin will be fit in those crunch fixtures.

Eddie Howe has a poisoned chalice in many respects. The Toon Army is dying to see our football club move onto the next phase of the operation, although everyone knows it takes time. Howe, meanwhile, will need a couple of weeks to drill his philosophy into the boys.
It’s obvious to everyone that the former Burnley and Bournemouth manager will play an eye-catching, possession-based style. Supporters should eat it up, especially after the attritional style of Steve Bruce. However, playing that way means that the players will make mistakes, and mistakes are costly in the Premier League.

St James’ Park needs to accept this, or else the manager and the team will be under huge pressure. Give the man a chance to show the Gallowgate End what he’s capable of. After all, it takes talent to do what he did with Bournemouth for so many years.

It would be a dream to have Newcastle in the Champions League and mentioned in the same breath as Manchester City and Liverpool. Sure, it may be a while before any Champions League predictions quote us as the 7/4 outright winner favourites, but anything is possible if our on-the-pitch and off-the-pitch activities are decisive.

The first port of call is to build a squad capable of challenging for the top four. To do that, the club will need to spend money on everything from infrastructure to players, managers, and wages. To do it organically, they must factor Financial Fair Play rules into the equation. Remember that FFP means we can’t buy anyone we want since we must balance the books.

As a result, Champions League football could be a decade or more away but as Alan Shearer said, all the Newcastle fans want is hope. In the Public Investment Fund, they have it in spades. Let’s watch this space.