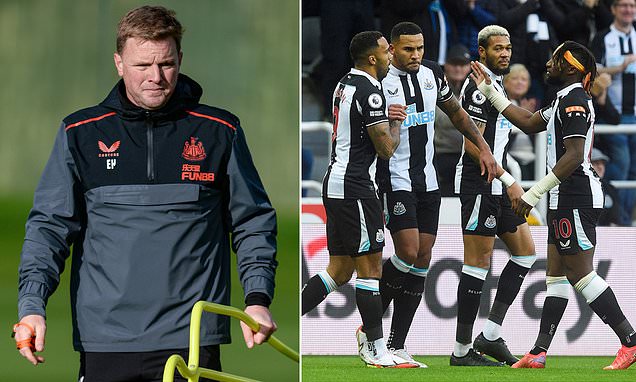 By Craig Hope for MailOnline

Eddie Howe has not given up hope of leading Newcastle for the first time at Arsenal on Saturday.

The 43-year-old will have to return a negative test to be released from his Covid-19 isolation, with symptoms having been traced back to at least 10 days before the game.

Newcastle are preparing for assistant Jason Tindall to face the media on Friday morning and, as it stands, he will take the team at the Emirates Stadium.

However, it is understood that a negative test would free Howe to travel to London for the lunchtime kick-off.


He has been in isolation in his Tyneside hotel room since learning he had contracted the virus last Friday, less than 24 hours before what should have been his first game at St James’ Park.

Tindall and Graeme Jones led the team for that 3-3 draw with Brentford - which saw the Magpies slip to the bottom of the Premier League - and they have taken training this week.

Howe, though, has designed each of the sessions and has watched back footage before making recommendations to his backroom team, with whom he has been in regular contact throughout the week.

Should Howe remain in isolation over the weekend then it is expected he will return to take charge for Tuesday night’s visit of relegation rivals Norwich City.