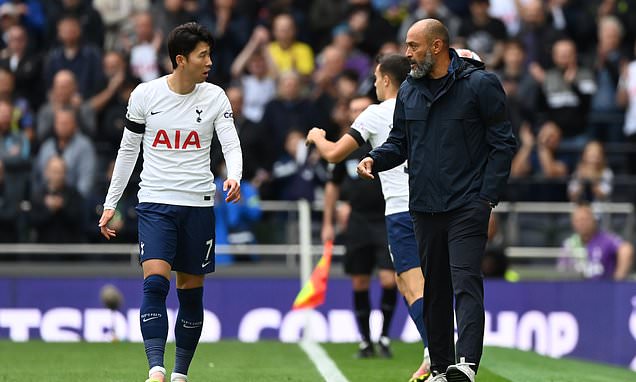 Amid the pageantry and rejoicing at St James' Park on Sunday, somewhere in the first energetic episode in the sportswashing of a murderous regime, a team of forgotten men will walk out on to the pitch. And, no, I'm not talking about whoever cleaned up after Mike Ashley when he puked in the fireplace after a drinking game with a Polish analyst called Pawel.

Tottenham will have a cameo role in the North-east on Sunday afternoon but that's OK. Their stars are getting used to that. Even Harry Kane doesn't get a full 90 for England these days.

They were once main players but, as the Premier League gets used to the idea there is another superpower among them, Spurs fans sense their own chances of winning the major trophies in the game are receding all the time.

That is one of the reasons why the Tottenham Hotspur Supporters' Trust released a list of 13 questions about the finance and future of the club that they had asked to put to Spurs chairman Daniel Levy and the board. Their attempts to secure a meeting with Levy over the past few weeks have been rebuffed, although the board's stance, apparently, may be changing.


There are many reasons for Levy to be proud of the things he has achieved at Spurs in the past two years. The only problem is that none of them have happened on the pitch.

Tottenham have the best stadium in the Premier League; a majestic arena that Levy will be able to point to as a fine and lasting legacy. But the best performance in it so far was Oleksandr Usyk's dismantling of Anthony Joshua last month. Nothing Spurs have done runs it close.

And that is Levy's problem. He has built a stunning stage but there is no one to strut and fret upon it any more.

There was a time when Spurs looked destined for the summit of English football or, at the very least, looked as if they had established themselves among the top-flight elite, but those days are nothing more than a memory now. Spurs were vibrant once. Now they have faded to grey.

The THST have sold themselves short with their 13 questions. They have enough material to be asking 1,300. Levy, fawned over by many as a gunslinger-businessman; the man who never blinks first; the man who always gets the best of the deal, has made one bad decision after another in the past two years. Getting rid of Mauricio Pochettino in November 2019 was one, hiring Jose Mourinho was another and not selling Harry Kane to Manchester City in the summer was another.

Forcing Kane to stay was one more fillip for Levy's ego. Once again, he was painted rather breathlessly as the guy you better not mess with when he swatted away City's attempts to prise Kane away with an opening bid that was only just north of £100million. Nobody gets one over on Daniel, you see.

Except, well, City seem to have got one over on him. Inadvertently, maybe, but even so they must be giving thanks at the moment that Kane stayed put. It is looking like they dodged a £120m bullet. Kane hasn't looked like the same player since he spoke rather too confidently last May of how he would decide whether he left Spurs, not Levy. The intakes of breath all around football suggested that was far from the smartest move.

Kane stayed and at the moment, Spurs look as if they have been saddled with a shadow of the player he once was. He has been painfully out of form for some time.

He is such a fine all-round striker that it is hard to believe he will not return to his previous pomp but it has reached the stage where we're all starting to wonder. I'm not sure anyone would pay £100m for him now.

Hindsight is a wonderful thing but if Spurs had sold him when his stock was at its highest in the summer, everybody would have been happy. Spurs would have got a British record fee to ease their repayments on their stadium costs and reinvest in the team, City would have got a striker to replace Sergio Aguero and England would have got a player revitalised by a move to a club consistently challenging for the biggest trophies.

Spurs, weakened further by Covid-19 absences on Sunday, are not in that number any more. They look a long way from competing for the Premier League title.

Even their own supporters would admit, I think, there is little immediate prospect of them finishing in the top four. Like Arsenal, they have become an upper mid-table team. Their reality now is that they are competing for the Europa League spots.

Their only realistic shot at trophies are the Carabao Cup and the FA Cup, when others might play weakened teams.

And the truth is that the arrival of the Saudis makes things even more bleak for Spurs.

It was reported that Levy was among those Premier League club bosses who objected to the Saudi takeover and he deserves credit for that because, outside of Newcastle, no one could have been particularly delighted to see a man whose tenure has seen a particularly grisly murder gaining a controlling interest at one of England's best-loved clubs.

But the Saudi takeover hurts Spurs in other ways, too. It may take time, but the amount of money Newcastle now have at their disposal will push them higher up the Premier League until they are challenging for the title. And that means that Spurs, and Arsenal, will fall even further away from qualifying for the Champions League.

Newcastle versus Tottenham is a match between what may be to come and what might have been. Newcastle's dreams, driven by blood money, lie ahead of them. Spurs' dreams lie dashed on the turf.

In the final years of the cursed era when Mike Ashley owned Newcastle United, a newspaper colleague wrote last week, Steve Bruce was his human shield.

Ashley had the luxury of absence when disillusion with his regime grew and grew. Bruce did not. He had to stand there on the touchline and take the abuse as it rained down on him, listening to people from his home city insulting him in the worst way possible and taking a little consolation in the fact that his parents, who both died just before he took over at St James' Park, were not there to hear it.

Bruce will celebrate his 1,000th game as a manager on Sunday in Newcastle's first game under Saudi Arabian ownership and he will be a spectre at the feast. Newcastle fans didn't want him there. But maybe when he is gone - and that moment will not be far away - they may come to reflect that they picked on the wrong man.

As the front man for Ashley's joyless, unambitious regime, Bruce did the best he could with what he was given. He made mistakes, and some of the football was far from scintillating, but Newcastle won the same number of points under him last season as they did in Rafa Benitez's best season at the club in the top flight.