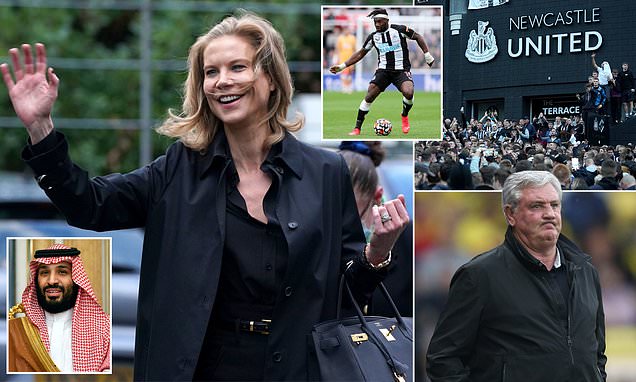 Finally, there is a game of football. It has been easy to lose sight of what lies at the heart of Newcastle United these past 10 days. In fact, make that 10 years and more of back-page headlines - rarely, if ever, for footballing merit.

If the club's Saudi-led takeover is to become the trophy-laden investment the new owners envisage, that has to change.

On the early evidence, however, the removal of Mike Ashley is not about to make way for a new era of serenity. If anything, the mercury is rising.

Amanda Staveley, who has led the Saudi takeover, will be glad to finally see some football

Tyneside has felt like the centre of the sporting universe - just without the sport - since confirmation a week last Thursday of the takeover that provides the club with the world's richest custodians, Saudi Arabia's Public Investment Fund being valued at £700billion.


It has been noisy, chaotic and not without conflict. It was ever thus at St James' Park. It may take a fair few Saudi riyals and a fair few years for the club to reacquaint itself with the stranger that is normality.

Take Friday's press conference involving the soon-to-be-sacked Steve Bruce. The owners - led on the ground by Amanda Staveley and her Iranian husband Mehrdad Ghodoussi - realised within hours of their arrival in the North-East that Bruce's presence threatened to pollute the atmosphere of their opening match.

He would, we were told, be gone by Friday. They could not have him as the footballing face of the new regime, it was said.

Yet there he was, in typically clumsy and contradictory fashion, talking about maintaining his 'dignity' before getting into a row with journalists and wishing we had been 'slapped' by our bosses for reporting he was to lose his job last week. Bruce prickled as he said it was 'what you [the media] all wanted'.

The manager took another swing when admitting that 'of course' he would enjoy 'shoving' a victory on Sunday back in a 'few people's faces', as the question was put to him.

Those around the consortium had taken note, and would not have been impressed. It was further proof of the need to remove a man who is seen by many as the cause of such toxicity and division.

What were they thinking leaving him in situ for a media call that should have been all about positivity and a club united? It even felt unfair on Bruce. The answer from some was that they ran out of time in making the change, evidenced by Staveley's statement less than an hour before the manager's press briefing confirming he would stay on for the Tottenham game.

Because of Covid, Staveley and Ghodoussi cannot be presented on the pitch on Sunday. However, shortly before kick-off there will be an announcement welcoming the new owners and they will either be at the side of the pitch or will stand up in the directors' box.

In the relegation zone at this moment, the feelgood factor of the pitch needs to show on it

It all felt so far removed from what we expected in week one of the world's new footballing superpower, as Liverpool boss Jurgen Klopp labelled Newcastle on Friday, through gritted white teeth and green eyes.

But superpowers do not need power struggles and sources say that, at present, there are many competing voices behind the consortium.

There is mitigation in that the speed at which the deal went through - ignoring the fact it has been nearly two years in the making - caught the group by surprise. When Staveley phoned captain Jamaal Lascelles in the minutes before the takeover was announced and said, 'Hi, it's Amanda', he replied, 'Amanda who?' Once the confusion cleared, they had a conversation that Lascelles said gave him goosebumps.

The British contingent of the ownership are keen to make the right decisions and sounds, not least because the Saudis are watching on during what is effectively a probationary period for Staveley and Co.

In the hours after the deal was signed off and, from the sofa of her hotel suite in Jesmond Dene House in Newcastle, Staveley spoke of surpassing the likes of Manchester City and Paris Saint-Germain, signalling her intent to win the Premier League after five years.

The plan had been to keep a lid on expectations. The lid, we understand, was last spotted by William Shatner from the window of his space capsule. But, back on planet earth, the reality of the opposition to Saudi money in the Premier League was beginning to hit home.

Saudi Arabia's Crown Prince Mohammed bin Salman has been criticised for the country's human rights record, one of the areas that has been scrutinised heavily since the takeover

Despite Newcastle's struggles, the expectations have rocketed since the takeover was sealed

But it soon became apparent that bragging rights were perhaps more of a concern among their rivals, as Newcastle learned of a planned meeting between Premier League executives and their 19 top-flight competitors, who were demanding to know why the deal had been passed.

'We will not be deterred,' was the message that came back. And that did not change in the hours after Tuesday's group call between the clubs, in which it was said Sunday's opponents Tottenham were particularly vocal. Again, it made back-page headlines.

Twenty-four hours later and Newcastle were still in the news, this time when Leicester's Brendan Rodgers let it be known he would reject any advances to become manager.

There have been countless other names floated and various other parties claiming to have been in contact with the consortium, and that will only intensify. For Bruce, the man charged with picking and motivating the team on Sunday, it has felt a little unedifying.

It has been that sort of week, especially given much of the coverage has justifiably centred on the moral issues of Saudi involvement in the Premier League. That is not going away anytime soon, either.

Finally, then, there is a game of football.