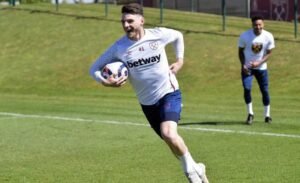 Rio Ferdinand and anyone else who believes Newcastle are suddenly going to immediately grab Declan Rice –  and many other big stars – has been told to forget it.

Former England international  Jonathon Woodgate spent a season at the club  as a player and managed  Middlesbroough. He and knows a thing of two about the north east.

And the first is that it’s always been vey difficult to attract bug names because of its geographically location but more importantly that the lure of Saudi ‘blood money’ is  going to be of no attraction to any of them.

He makes the very relevant point that finance is not going to make the Bar Codes into a top team overnight and that they are unlikely to be wining things for some time hence.

Thus they are hardly the most attractive option for top player looking to win things here and now. Five or ten years down the line maybe but there’s much work ro be done on the club’s infrastructure before that can happen.

All very sensible points which clearly have avoided the Ferdinand quote a minute mindset!

Woodgate said: on BBC Radio 5 Live’s Friday Football Social: “If you look at it and what they (the owners) have to do, they have to build the infrastructure from the bottom over the years.

“If any player has got anything about him, he goes to Real Madrid, Barcelona, Manchester United. No disrespect to Newcastle, he ain’t going up the road to them.

“For the Newcastle fans to think they are going to get Kylian Mbappe and all these top players, it is dreamland, you have to build it. It isn’t easy, you can’t just buy success. It doesn’t work like that in this league.”

Liverpool manager Jurgen Klopp has warned it will take time, saying: “In five, six, seven years’ time, if the owners are patient enough, Newcastle is a new superpower and they will have enough money to buy the whole league.”