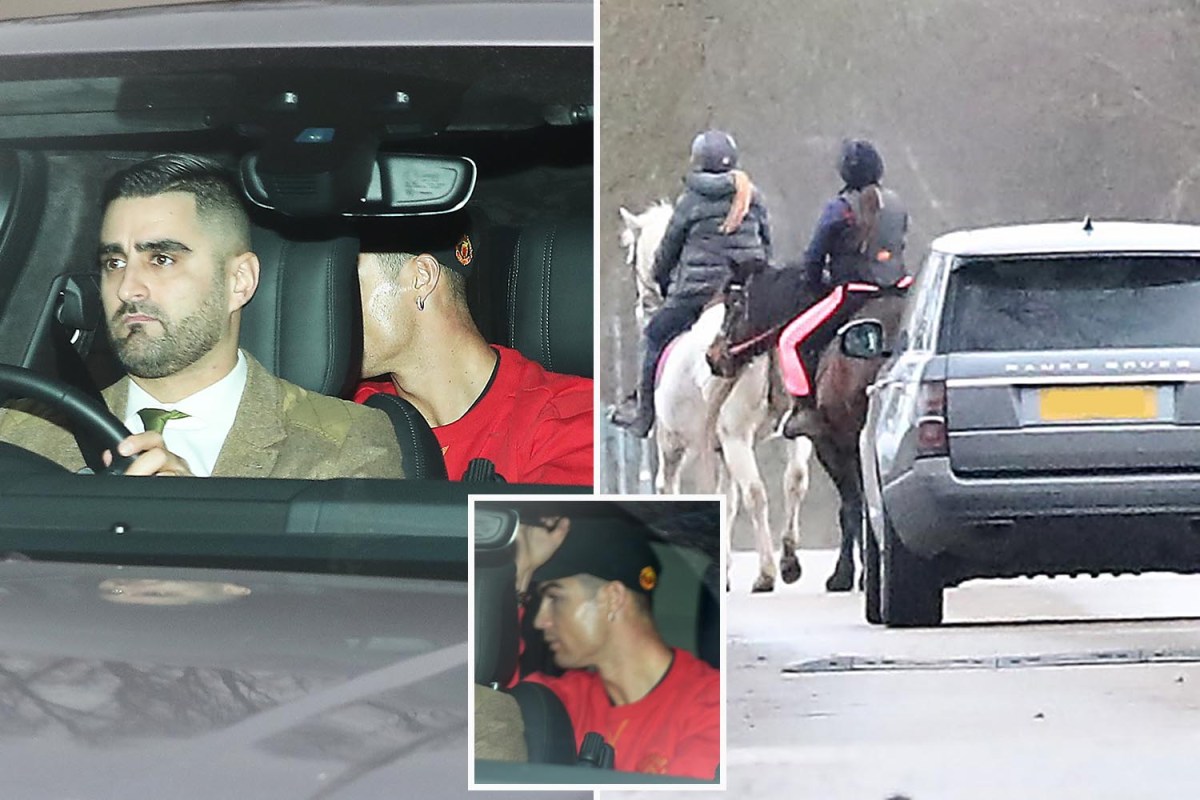 CRISTIANO RONALDO was held up by HORSES on his way into Manchester United's training ground as his team-mates were joined by their Wags at Carrington.

The 36-year-old could be seen driven into the Red Devils' training facility by his security guards - twin brothers Sergio and Jorge Ramalheiro.

Ronaldo is battling a neck injury ahead of the clash against West HamCredit: Zenpix

Ronaldo's arrival into the club's training ground was delayed after being stuck behind two horsesCredit: Eamonn and James Clarke

But his arrival was delayed as the five-time Ballon d'Or winner's Range Rover was stuck behind two horses.

Ronaldo is a doubt to face West Ham at Old Trafford on Saturday with interim boss Ralf Rangnick revealing the forward is battling a neck injury.

He told MUTV: "Cristiano is a question mark because he has a problem with his neck.

“He received treatment yesterday for two-three hours and we will have to wait to see how he feels today."

As Ronaldo was driven into Carrington, a number of his team-mates were spotted with their Wags as they pulled into training.

Donny van de Beek was joined by pregnant partner Estelle Bergkamp as he drove into trainingCredit: Eamonn and James Clarke

Edinson Cavani is a doubt to face West Ham at Old Trafford on Saturday due to injuryCredit: Eamonn and James Clarke

Diogo Dalot is expected to retain his spot at right-back in the absence of Aaron Wan-BissakaCredit: Eamonn and James Clarke

Dalot is expected to retain his spot at right-back to face the Hammers in the absence of Aaron Wan-Bissaka.

But Phil Jones is likely to miss out on selection with Harry Maguire poised to partner Raphael Varane following the break-in at Victor Lindelof's home.

Cavani remains a major doubt to feature against David Moyes' men after missing the midweek trip to Brentford.

United know a win against West Ham will seem them leapfrog the East London outfit in the table and boost their chances of finishing in the top four.

And in a plus for United, Rangnick has confirmed Scott McTominay should be fit to start after he was taken off late in the 3-1 win over the Bees.

He said: "According to the medical staff, and I spoke with Scotty myself yesterday, he should be back in training today and I think he will be available tomorrow."

Mason Greenwood is in line to start against the Hammers at the Theatre of DreamsCredit: Eamonn and James Clarke

Harry Maguire could be brought back in the line-up with Victor Lindelof ruled out due to personal reasonsCredit: Eamonn and James Clarke