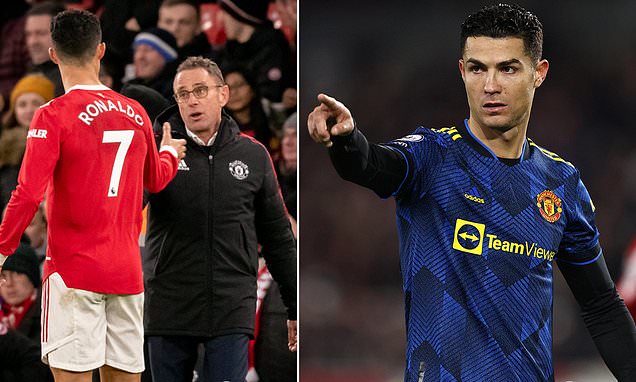 Ralf Rangnick has told Cristiano Ronaldo that no player is bigger than the team and feels the Manchester United star went over the top when he protested about being taken off at Brentford.

Ronaldo reacted angrily after he was replaced midway through the second half of the 3-1 win on Wednesday, gesticulating and throwing his coat to the ground before he was placated by Rangnick in the dugout.

But United’s interim boss defended his decision on Friday and said it was fully justified when substitute Marcus Rashford scored to seal victory.

Rangnick, who revealed that Ronaldo is a doubt for Saturday's game at home to West Ham due to a neck injury, said: ‘It’s a team sport and it’s important for us that we get the most out of each game.


‘The team is more important than no matter who it is — Cristiano, Edinson Cavani, Bruno Fernandes or any other player. It’s about what is in the best interests of the team.

‘I didn’t at all see or interpret that he was challenging me. He just showed maybe too emotionally that he was not happy to be replaced. I don’t blame him for that but obviously any manager I think would wish it shouldn’t be too emotional and also in front of the TV cameras.

‘I didn’t take it personally. I have managed other players, maybe with not as quite a big name as Cristiano, and I know how these players react to being substituted.

‘In this case, everything that I had hoped with the result of that decision was confirmed in the end.’

Victory kept United in the hunt for a top-four finish ahead of Saturday's meeting with fourth-placed West Ham.

However, Victor Lindelof will miss the game after it emerged that raiders targeted his family home while he was playing at Brentford. Lindelof has flown to Sweden with his wife Maja and their two young sons, who were in the house at the time.

‘This was a traumatic event, especially for his wife and three-year-old son,’ said Rangnick. ‘He doesn’t want to leave his wife and family on their own.

‘I think we will have a meeting where the club will speak to the players about what kind of measures can be taken to increase the level of security.’

Jadon Sancho could also be left out on compassionate grounds after missing the Brentford game to attend a funeral.