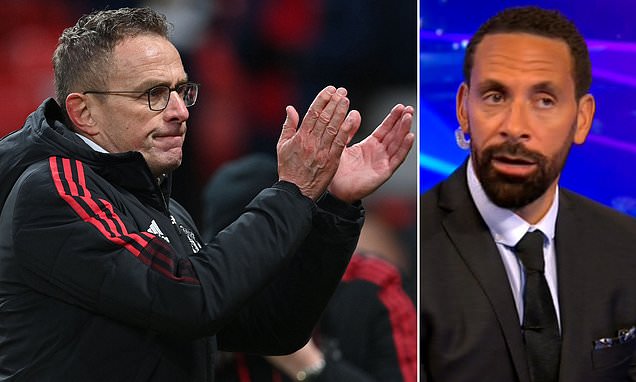 Ralf Rangnick's impact is already being felt at Manchester United, with 'notable differences' emerging in the team's tactical approach, according to Rio Ferdinand.

The German, who will be in charge until the end of the season before taking on a two-year consultancy role, kicked off his reign as interim manager at Old Trafford with a 1-0 win over Crystal Palace on Sunday, courtesy of a superb strike from Fred.

One of the architects of Gegenpressing (counter-pressing), Rangnick has vowed to transform United into a high-intensity pressing team but warned it would take time for his philosophy to deliver results.

Ferdinand, however, believes the 63-year-old had already tweaked United's style of play significantly.


'We won't get carried away, it's been one game and maybe a training session,' the former England international said on BT Sport on Tuesday, prior to Manchester City's game against RB Leipzig, Rangnick's former club.

'But there were noticeable differences and changes to the team, the structure of it, the way they pressed as a team – that's the important point.

'He keeps saying he wants to get a good balance between attacking with the ball and without.'

Against Palace, Rangnick named an unchanged starting XI from the one that had beaten Arsenal 3-2 just three days earlier, but opted for a 4-2-2-2 formation.

Having often looked very disjointed when trying to press under Ole Gunnar Solskjaer, United were far more cohesive when looking to regain possession on Sunday.

United won possession in the final third of the pitch 12 times against Palace, the joint-highest tally since Sir Alex Ferguson retired following the 2012-13 season.

There were improvements in other areas of the pitch too, as United conceded just eight shots for an xG (expected goal) against value of 0.75, respectively the second-lowest and fourth-lowest figure this season.

While Jordan Ayew had a glorious chance to put Palace ahead, United looked generally more solid at the back than in previous outings and David De Gea kept a first Premier League clean sheet at Old Trafford this term.

In his first press conference as United's interim manager, Rangnick had suggested he would place great emphasis on ensuring his players recover the ball quickly.

'Football, for me, is to minimise the coincidence factor and have control and gain control of a game. This is football, what it’s about.

'This is my approach and I will try to help these outstanding, talented players to try and keep away from their own goal.'