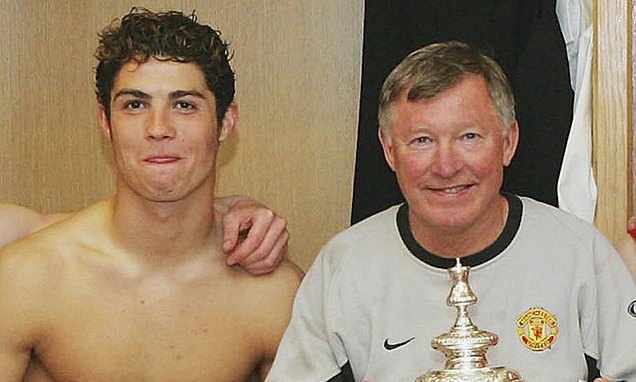 Cristiano Ronaldo had no problem letting his Manchester United team-mates know he wanted to leave the club in 2009.

The Portugal star made the move to Old Trafford in 2003 and quickly rocketed to stardom following his debut against Bolton Wanderers.

The forward went on to win three Premier League titles and the Champions League with the club, as well as becoming United's first Ballon d'Or winner since George Best in 1968.

But five years on, Ronaldo had decided it was time to move on from Manchester and with Real Madrid circling, it was not long before he was pushing for a transfer.


Sir Alex Ferguson soon became aware Ronaldo was trying to put the wheels in motion to leave Old Trafford but the former United boss refused to cave to his demands.

In his autobiography, Ferguson explained how he persuaded Ronaldo to stay for one more season, as he recalled: 'Real Madrid paid £80m in cash for him [in 2009] and do you know why?

'It was a way for Florentino Perez, their president, to say to the world: "We are Real Madrid, we are the biggest of the lot."

'Ramon Calderon, Perez's predecessor, had claimed the previous year that Cristiano would one day be a Real Madrid player.

I went to Carlos Queiroz's house in Portugal to find the boy expressing an urge to go to Real Madrid, and told him: "You can't go this year, not after the way Calderon has approached this issue".

'I said: "I know you want to go to Real Madrid but I'd rather shoot you than sell you to that guy now. If you perform, don't mess us about, and someone comes and offers a world record fee, then we will let you go".'

'I did well to calm him down. I told him the reason I was refusing to sell him that year was because of Calderon.

'I said: 'If I do that, my honour's gone, everything's gone for me, and I don't care if you have to sit in the stands. I know it won't come to that, but I just have to tell you I will not let you leave this year''.

Ronaldo was not deterred by the initial setback and Ferguson kept his end of the bargain allowing him to move to Real in 2009.

But Ronaldo did not hesitate to inform his team-mates he intended to leave, according to former United winger Nani.

'We would stay at the end of training to do competitions and they [Anderson and Ronaldo] were my teammates, everyone has best friends or some they feel more comfortable with and they were my support,' explained Nani, via The Mirror.

'Some days he [Ronaldo] was telling us openly, "I'm here six or seven years now, I think it's enough for me." He said that a couple of times.

'After we won the league in the second year he left, he produced a great season so we were still surprised.'