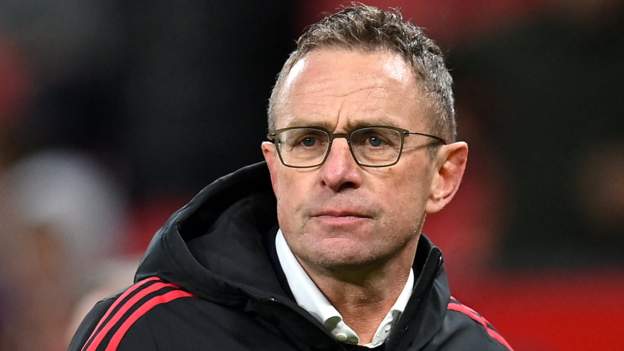 Manchester United interim boss Ralf Rangnick says it is "absolutely logical" to have an "an expert for the brain" among his coaching staff after appointing a sports psychologist.

Sascha Lense is one of two backroom appointments Rangnick intends to make once United can get the required visas.

Lense, 46, is a former second division player in Germany and worked with Rangnick at Schalke and RB Leipzig.

"For me it is absolutely logical," said Rangnick.

"This is not about putting them on the red sofa and holding hands with players.

"If you have special coaches for goalkeeping, physical education, strikers, fitness, you should also have an expert for the brain."

"In the last couple of years, in Germany, most clubs have employed a sports psychologist," said Rangnick.

"I had Hans-Dieter Hermann, the current sports psychologist of the German national team, with me [at Ulm] in 1998. We were probably the first club in Germany to do that.

"It is about helping to show the players how the brain should assist the body, not work against it. Whenever we speak about football, we know that the major part is in the brain - what do you think? How do you analyse the situation?

"The players, the coaching staff, everybody in our team should think in the right way."

It is clear Rangnick will expect the coaching staff he has inherited at United to be open to Lense's work, which will be on the training pitch and not hidden away from view.

"Sascha is hands on," Rangnick said. "He doesn't work in theory. He is part of training sessions.

"Having worked with him at Leipzig I know we can benefit a lot from him a lot. The coaches have to allow that. At the top level, it is vital you should have the best possible person on this job."