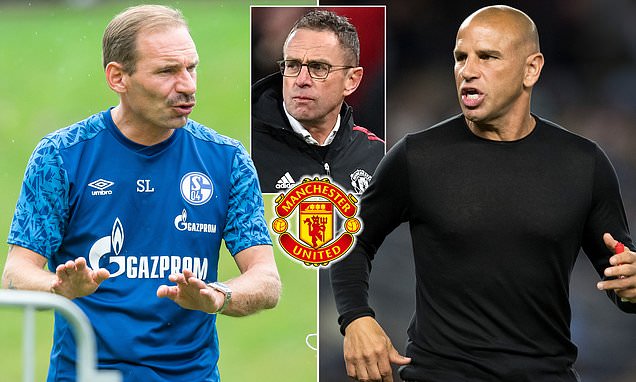 Ralf Rangnick's imprint on Manchester United is beginning to take shape after the club confirmed the imminent arrivals of Chris Armas and Sascha Lense as members of his backroom staff.

Coach Armas and highly-rated sports psychologist Lense are awaiting work visas ahead of becoming part of Rangnick's new-look staff but it was announced on Tuesday that both are coming to Old Trafford.

Lense was introduced to players at United's Carrington training base on Monday. The 46-year-old former midfielder previously worked with Rangnick at Schalke and Red Bull Leipzig but will have to wait for clearance on his visa before he can begin applying his well-regarded techniques to United's squad.

Armas, the 49-year-old former New York Red Bulls and Toronto FC coach, has also applied for his work visa ahead of being cleared to join up with Kieran McKenna and Mike Phelan.


Rangnick knows Armas from his work with Red Bull and has been looking to appoint up to three new coaches or analysts as he moves forward, particularly after Michael Carrick left United last week.

On his new recruits, Rangnick said: 'It won't be that many. I'm very happy with the staff I met last week and they gave me a lot of help in a lot of ways.

'We have decided to bring in a sports phycologist with Sasha Lense. He's was second division player when he played at RB Leipzig. We know each other since then and he will be introduced to the team as soon as he gets his visa and work permit tomorrow or on Thursday.

'I will also have another assistant coach in Chris Armas, who was the head coach at NY Red Bulls five years ago and we know each other. He will be able to join us in our team in the next two days.'

Jesse Marsch, who was sacked as manager of Red Bull Leipzig on Sunday, has also been discussed but is understood to hold some reservations about fulfilling a role as assistant again after stepping up to be head coach.

Armas was sacked as coach of Toronto FC in July after they lost 7-1 to DC United with Toronto president Bill Manning saying: 'When you see a team concede like we did, we just saw no way back outside of making the coaching change.'

However, during his one full season in charge at New York, statistics showed they had the fastest ball recoveries in the MLS, with the highest press, and played the most direct attacking style - traits accustomed with Rangnick's methods.

Armas only last six months in his role with Toronto, having been fired after an awful  7-1 defeat

Rangnick made a promising start to his interim reign at United winning 1-0 against Crystal Palace. He changed training time immediately last Friday as players came in after 2pm following their 3-2 win over Arsenal on Thursday.

They trained at 3pm as Rangnick implemented his preferred 4-2-2-2 system. They had another training session on Saturday, again at 3pm, which was disrupted by the turbulent weather so they had little more than 45 minutes outside.

Rangnick took time going through video footage and speaking individually to his new players and explaining how they would work in groups as he ensured they were as well prepared as time allowed.

United face Young Boys on Wednesday in the Champions League.