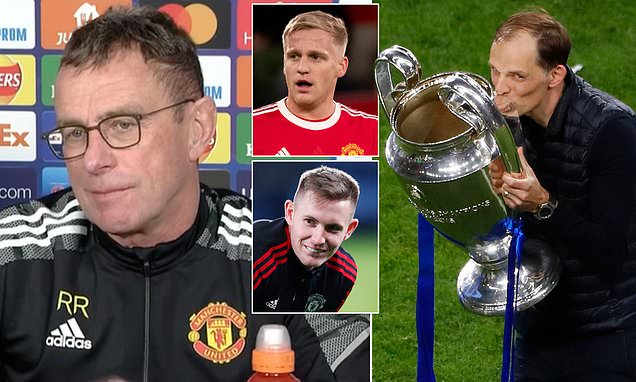 Manchester United's interim boss Ralf Rangnick has insisted that it is 'too early' to know whether the club can win the Champions League this season.

Rangnick was appointed as United's interim boss on a six-month deal last week but expectations are already sky high for the German coach at Old Trafford.

Ahead of United's final group stage game against Young Boys on Wednesday, Rangnick was asked whether he could replicate Thomas Tuchel's incredible achievement of winning the Champions League in his first six months at the club.

Tuchel miraculously guided Chelsea to their second Champions League title just months after being appointed as head coach but Rangnick is keen to play down these comparisions at this early stage in a short tenure.


When asked about United's chances of winning the Champions League this season and matching former colleague Tuchel's achievements just six months into the job, Rangnick said: 'It's too early – I've only been here for a week, it's too early.

'But with Manchester United we want to be successful and ambitious in all competitions.'

Rangnick also confirmed that he would be rotating the squad for Young Boys' visit to Old Trafford on Wednesday evening but he is yet to fully decide who will be in his starting XI.

Two of the names who would be starting were goalkeeper Dean Henderson and Donny van de Beek, who were both frozen out by former boss Ole Gunnar Solskjaer.

Rangnick confirmed that both men would get the chance to impress and would be on the pitch at the first whistle.

'I haven't finally decided (my team) but it makes sense we will rest a few players due to the crowded fixture list,' Rangnick added.

'We need to make sure we have as many recovered players as possible but also need the positive momentum.

'The first game in this group we lost at Young Boys so we need to make up for that.

'[Henderson and Van de Beek] will both play tomorrow, in the first XI.

'Donny came on as a sub last Sunday. Dean is a very ambitious 'keeper and we need two for the run of fixtures.'