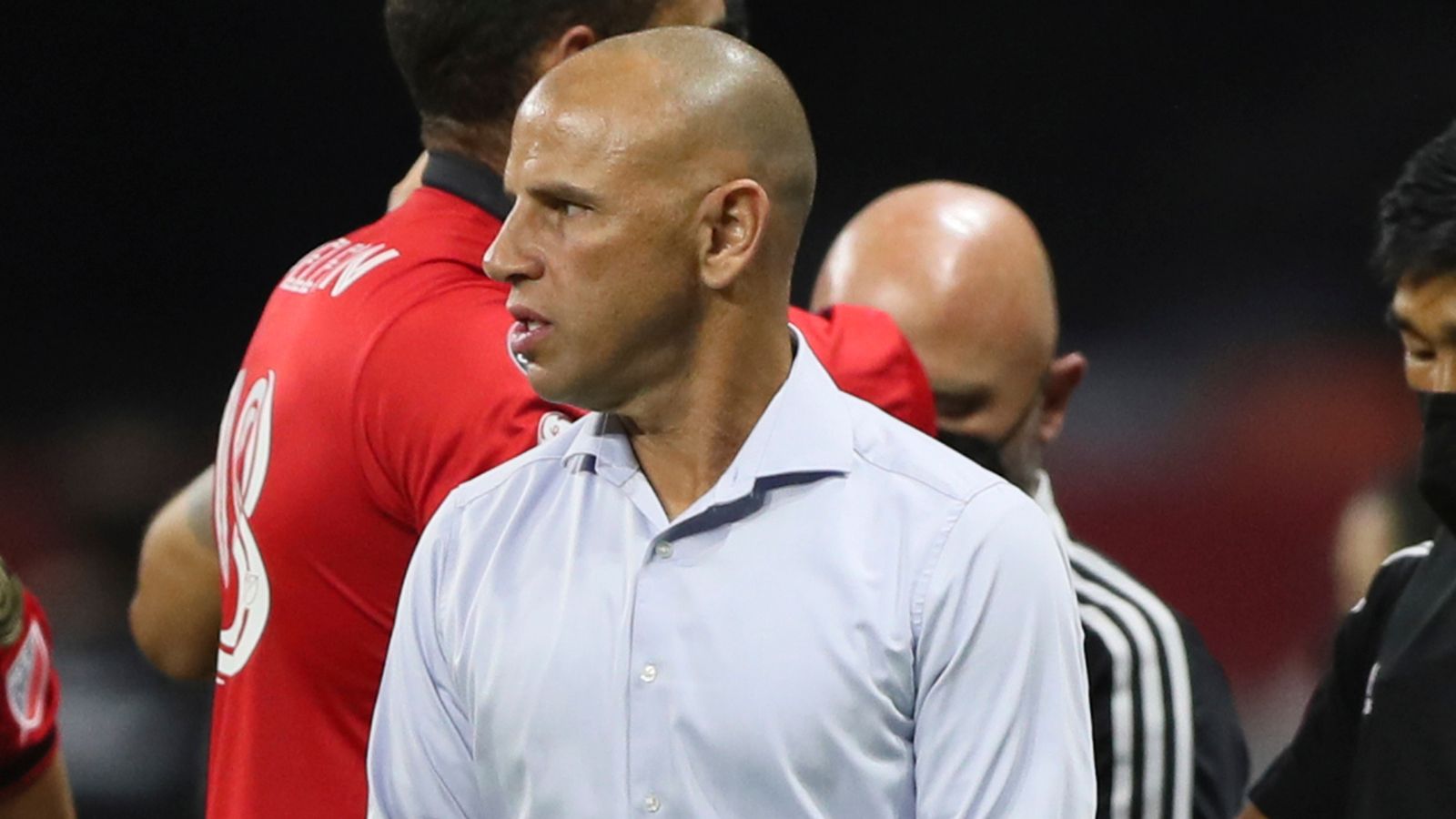 Ralf Rangnick has confirmed coach Chris Armas and sports psychologist Sascha Lense will join his setup at Manchester United, while both Donny van de Beek and Dean Henderson are set to start against Young Boys on Wednesday.

Armas was head coach of New York Red Bulls from 2018 to 2020 before taking charge of Toronto FC until he was sacked in July this year.

Rangnick, who was Red Bull's head of sport and development during Armas' spell in New York, also worked with Lense at RB Leipzig - and United's interim boss is hopeful work permits will be granted soon.

"We have decided to bring in a sports psychologist, Sascha Lense, I worked with him for three years at Leipzig," Rangnick said. "We know each other. He will be introduced to the team as soon as he's got his visa. I hope we'll have him on board by Thursday.

"I will also have another assistant coach with Chris Armas. He was at New York Red Bulls when I met him. He will again hopefully be able to join us in the next few days."

On the need for a sports psychologist, Rangnick said: "I don't know what the situation is like in England. Most German clubs have employed a psychologist. For me it is logical. If you have special coaches for goalkeeping, strikers, fitness, you should also have an expert for the brain.

"Not to put them on the red sofa, or hold hands, for me it's about helping the players know the brain should assist the body, not work against it. For me everyone in the team should think the right way. Whenever we speak about football, the major part is up here [the brain].

"He's a former player, hands on, not caught too much in the theory. Having worked together at Leipzig I know we can benefit from him. For me it's vital on top level you should have the best person possible on this job."

Van de Beek and Henderson to start vs Young Boys

Having already qualified for the knockouts as group winners, Rangnick said it would "make sense" to rest players and revealed both goalkeeper Dean Henderson and midfielder Van de Beek would start when quizzed about their futures beyond January.

Rangnick said: "To start with they will both pay tomorrow in the first XI. Donny came on as a sub [against Crystal Palace], and I know Dean is a very ambitious goalkeeper.

"We definitely need two goalkeepers, and then with Tom (Heaton) and Lee (Grant) we have four. I have to get to know the players first to finally assess them. Right now I'm happy to have them on board."

Rangnick provided a similar answer when asked about Jesse Lingard, adding: "Everybody has the chance. That's why I'm happy to give game-time to quite a few of those players tomorrow.

Edinson Cavani and Raphael Varane were pictured back in training on Tuesday, but Rangnick said it will not be until next week when they take part in full sessions.

Rangnick said: "They both cannot play tomorrow but they were part of the training session today. If everything goes well I'm expecting both of them back in full training next week.

"Obviously they're top players, and would be happy to have them on board. With Rapha, it's about sustainability, not only getting him fit as soon as possible, but also for the rest of the season."

Gary Neville assesses Rangnick's first game in charge of Manchester United, identifying a significant change of shape and praising the new coach for bringing order after the chaos.

Fred's goal in the 77th minute was enough to secure the three points against Crystal Palace at Old Trafford in what was a much-changed Manchester United performance.

"I really enjoyed the game," Neville told Monday Night Football. "Was it flamboyant football? Were Manchester United at their absolute best in their last hour? It was a struggle at times. The first half an hour they were absolutely fantastic. The last hour they got the job done.

FREE TO WATCH: Highlights from Manchester United's win against Crystal Palace in the Premier League.

"But I actually sat down today and I respected the last hour more than the first 30. He had 48 hours to coach his team, 48 hours to be with his players.

"We have all spent the last six or seven weeks saying that Manchester United have been a mess defensively. They had not had a clean sheet in 16 games, conceding goals like you would not believe, getting battered at home by Liverpool and Man City, counter-attacked against Leicester, Villa, Villarreal. All the other teams had cut through them.

"What Ralf Rangnick would have wanted was order. Order in the performance. I think we got that.

"A big one is that on average it looked like teams were going to score 1.6 goals per game against United. You are in big trouble if you end up conceding two goals in a game. Less than one yesterday. They were more competitive, more tackles, more duels."